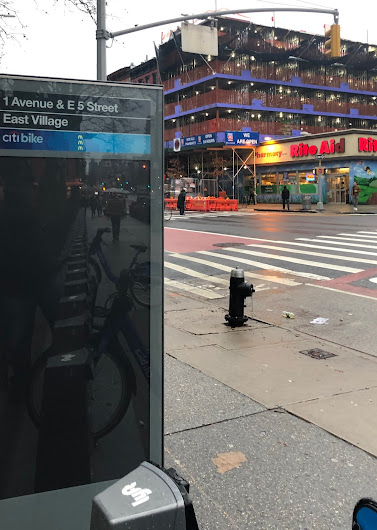 A new Citi Bike docking station with 51 docks arrived on the east side of First Avenue between Fifth Street and Sixth Street late last week... 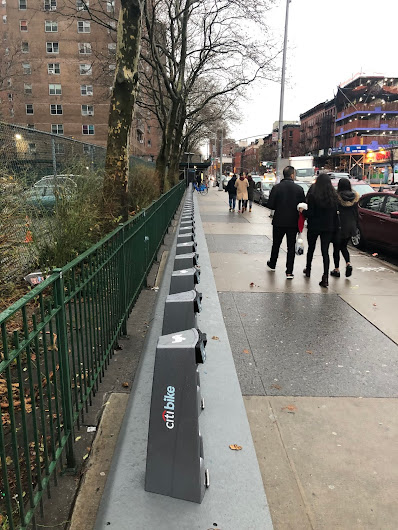 This was one of the two new docking stations that Citi Bike said they'd add to the East Village this year. Still no sign of one at the other promised location, 12th Street and Avenue C, though a Citi Bike rep said that remains in the works.

Previously on EV Grieve:
A look at where Citi Bike is expanding in the East Village
Posted by Grieve at 4:30 AM

Terrible.
Was an easy street to walk on, now at least half of
it is taken up by that stuff.

This station is a blessing. Every time I want to shop at Dual Specialty Store I need to dock at Av A and 7th which is quite far. It is wrong to put it on the sidewalk though. A citibike station is a better use of curb space than free car storage . When it is designated ASP one person uses the public space for days rather then dozens of others who will use it docking and pulling bikes.

Shrinking the sidewalk now, do these people even think about the pedestrians?

How much more of our public sidewalk space is this private, for-profit behemoth going to be handed on a silver platter?!?

Love it, very convenient location to shop at the local stores and for many of us residents of Village View! I do wish it had been placed on the street though, to leave the sidewalk clear for pedestrians and to make better use of the space that currently only serves the lucky few and their cars.

Important to remember that as the bicycle infrastructure (bike lanes, Citibike etc) has been growing, especially since about 2010, there have been massive cuts to bus service (frequency, routes, bus stops etc)

The City has been adamant that it could not contribute more to the MTA for NYC mass transit buses and subways -but somehow the City decided it had billions to support bike infrastructure.

Bus transportation has been starved but lots of money for bicycles....

If you take the length of the bike and double it to get it out of the dock... there's about 2 feet of sidewalk left. Just another example of how little the pedestrians means to the bike-Nazi taking over the city.

Definitely agree. These bikes should be on the street. People need to complain about this.

@afbp - No, it's called the continued corporatization of areas that are supposed to be open for pedestrians. There is nothing "progressive" about public space being taken over by private companies - we, the people, don't benefit from the practice, the shareholders of the companies do.

Bikes and docking stations should NEVER be allowed ON the sidewalk. Why does NYC let Citibike do this?

It's a danger to pedestrians, and this seemingly has been done with ZERO consideration for anyone who is disabled and/or needs to use a wheelchair or mobility scooter.

Bikes are now being prioritized even higher than people who WALK, and higher than MTA bus service. This is fucked-up.

Anon 11.13am: the city does not contribute any funding to citibike. In fact, citibike even pays the city for using curb space.

The bus lane on 1st Ave is why the docking station is on the sidewalk. That said, I don't know why they couldn't have installed it around the corner on 6th st.

Nope. There is ample space at the curb to install the station yet the city chooses to prioritize 4 or 5 car owners at the expense of many hundreds who use the sidewalk and the dozens who use the bicycles. All for allowing 5 people to store their private vehicles, for free, on public space

The myth of bike riding is that it cuts pollution. It doesn't. There are more cars on the streets today than ever before but less space to drive. And the constant traffic jams... guess what... cause more pollution. So it's lose/lose for everybody.

@afbp - Now you are being specious. I am not talking about the health benefits for those who ride the bikes, I am talking about the vast majority of New Yorkers, who live here and pay taxes, who don't ride the bikes and who thus don't get those wonderful stats you seem to think makes the fact that their city is being taken from them piecemeal and handed to global conglomerates an okay thing.

We all benefit from more bike infrastructure. A great transpo option plus bikes, yes, make the city safer for pedestrians as well. Having said that, we should giving up free street car storage for bikes, not pedestrian space.

@GOJIRA---we can go back/forth until---but MY POINT IS---corporate issues aside---there is a benefit for those that choose to ride a bike---you may choose not to---and consider it an affront to your personal freedom that a bit of PUBLIC space is being utilized for those who choose to ride a friggin bike---get over yourself !

Besides the space docking stations take away from pedestrians, bike riders tend to ride their bikes on the sidewalk from the intersection to the dock, coming and going. They don’t get off the bike and walk them up to the dock, they ride them, further endangering pedestrians. And we’re supposed to just “suck it up.”

Of course the City (we the taxpayers) contribute funding. Who pays for the sidewalks, and for the bike lanes that are increasingly being dominated by Citibike mobile ads and Amazon cargo bikes?

Yes, is there anyone who thinks Citi is funding these bikes out of altruism?

I’d rather they stop charging me $144 a year to maintain a basic checking account, not including the checks and extra fees.

We give over an entire lane of traffic to Citibank and Amazon bikes and motorized restaurant delivery scooters and banker bros on 2 wheels. How many billions in real estate is that, by cost-per-Square foot? Plus, the loss of a traffic lane funnels car traffic into choke points, so now I pay an extra $2.50 congestion cab fee to drive through my own neighborhood to work at 4 in the morning, when a bike or public transportation isn’t adviseable from a safety standpoint. I am personally subsidizing the bike/Citibike explosion on several levels. And Guess what happens when enough people become dependent on the bikes? Why, yes, the price will rise suddenly, and former riders will crowd bus and subway service, which will have been downsized during the bike boom.

i am not the arbiter of what is correct/incorrect in NYC---there is a LONG list of people being surly/selfish/misogynistic/criminal/irrational/racist---what i attempt to do---is not make everything about ME---corporations are an irrevocable part of the USA---EVERYONE IN NYC pays taxes (be it income/excise/real estate/sales)---so i NEVER make that the crux of any position---i EMBRACE change and development---and try to spend as little time as possible--- lamenting about my glass not being as full as my neighbors :)

@afbp = Please take your own advice.

I'm glad they've installed this. They really haven't figured out how to redistribute the bikes across the village, the East Village always has much fewer available bikes than the West Side probably due to fewer subway connections. The bike angels need to work harder!

There is no "billions to support bike infrastructure."

better to take out your aggravation, justifiable as it may be, on the single person multi ton storage boxes that take up WAY more space