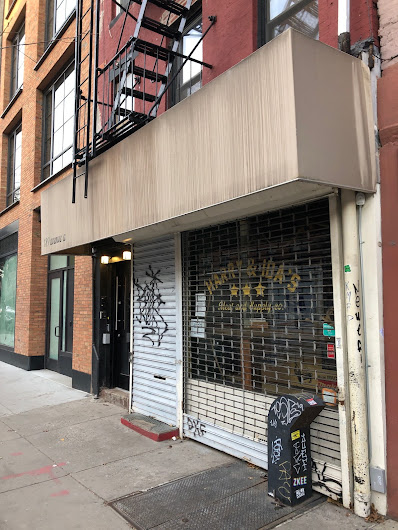 Foxface, the tiny shop for adventurous sandwich seekers at 80 St. Mark's Place in Theatre 80, is opening a new venture on Avenue A near 12th Street.

East Village residents Ori Kushnir and Sivan Lahat made the announcement on Instagram this morning... offering details on what they have planned for the former Harry & Ida's Meat and Supply Co., where owners Julie and Will Horowitz closed on Nov. 25 after four-and-a-half years of business.

Dear Friends, Sometimes things just fall into place. Ever since we opened Foxface we've been daydreaming of a space nearby where we could smoke, ferment, dry, cure and otherwise transform ingredients in ways that do not fit in our tiny kitchen. Our dream "nearby" was probably in industrial Brooklyn, but then, out of the blue, @willhorowitz stopped by for a sandwich and casually mentioned he and @shweetums might be looking to pass on their smokehouse a few blocks away... You can imagine that we were doing all sorts of happy dances inside while trying to keep our cool fox faces. 🦊 💃🕺... This felt like it won't just be great for us and our sandwiches (and @sivantokyo's sanity whenever @orikushnir comes up with yet another loopy idea), but also like it would be a way to keep the cultural asset that Will & Julie have given the neighborhood from being replaced, in all likelihood, by a bro bar. (not that we have anything against bro bars - we have everything against them) We ramble, but to TLDR: We're happy to announce that in spring 2020 (we hope), @Foxface_Provisions will be opening as a smokehouse, tasting room, and preservation commissary in the space that once housed @harryandidas on Avenue A. See you there soon, and at Foxface in the meantime!

So look for Foxface Provisions — a smokehouse, tasting room and preservation commissary — later in the spring of 2020. They will keep the small current space at 80 St. Mark's Place just west of First Avenue, which they opened late last year. Pete Wells is among the fans of Foxface.


From time to time we'll take a look at some recently available retail space... such as 189 Avenue A between 11th Street and 12th Street.

The 950-square-foot (plus basement) storefront, which previously housed Harry & Ida's, has a monthly ask of $9,500, per the listing... which notes this is a "Heavily Trafficked East Village Location" with a "Close Proximity to Tompkins Square Park."

The Harry & Ida's Meat and Supply Co. closed on Nov. 25 after four-and-a-half years of business.

I've heard that Foxface, the sandwich shop, has signed a lease there....

"Heavily trafficked"?! In what alternate universe would that be?

I hope this means they will retire the "walk up and receive a ticket to put in your order later". I've tried to snag one of their sandwiches but never have enough time to stop and wait.

Oh boy the second coming is coming and its a sandwich shop.

As sad as I am to lose Harry & Ida's, this is great news.

Honestly Harry & Idas should’ve held out a little longer. The 1st & A L-train stop will change the traffic here.

Foxface is a nice place,
hope this works out.

Bring Feltmans back to St. Marks!!

This is really great news -- I'm sad to see Harry and Ida's go, but FoxFace is such a great operation. The only drawback is the weird (but charmingly quirky?) space they're in now. This won't just solve that problem, it's also going to give the FoxFace team a cooking facility that would be incredibly costly to build (just try getting a smoker set up in a NYC restaurant).

Sometimes clouds do have a silver lining