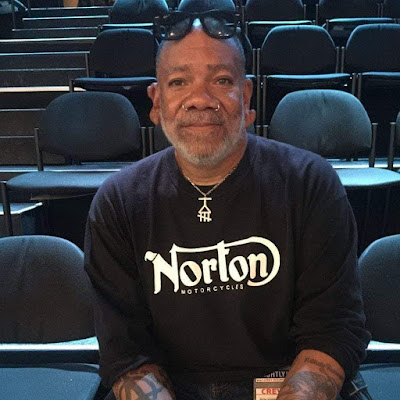 Ron Edgecombe, a longtime local resident dating back to the early 1980s, died this past week. He was 61. A friend said that he had contracted pneumonia.

He worked as a stagehand at venues around the city, most recently at the PlayStation Theater in Times Square. He was also a familiar presence at the free concerts in Tompkins Square Park.

Friends are leaving remembrances on this tribute page on Facebook.

Funeral arrangements are pending.
Posted by Grieve at 11:30 AM

RIP. he was a great guy. he always had me smiling when i would run into him. Ill miss him,

I loved Ron. Really sad about this. Always the good ones leave us first...

What a special man. I had the pleasure of working with him for years and we had this neighborhood in common. I’m lucky to have shared some time in this life with him. I already miss his laugh, his voice and his zero-tolerance-for-bullshit point of view. I also loved when he would put music on at work. Usually loud and fast, always got everyone’s attention. I hope that heaven for Ron is that boat in the islands. May he rest in peace. I’m so lucky to have known him.

Rest in power my brother.