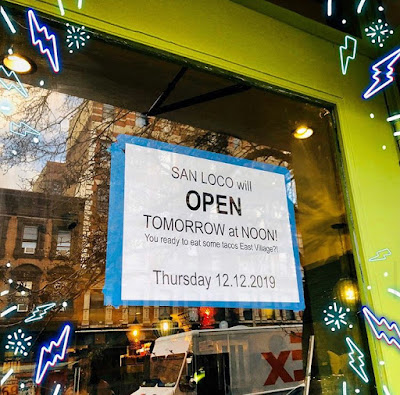 There's a noon opening time here for their debut at 111 Avenue C between Seventh Street and Eighth Street.

The quick-serve Tex-Mex restaurant made the announcement yesterday on Instagram.

As previously noted, San Loco debuted at 129 Second Ave. in the East Village in 1986 ... before later moving across the street to 124 Second Ave. between Seventh Street and St. Mark's Place. That outpost closed in June 2017 due to an unsustainable rent increase. The Avenue A San Loco closed in 2014 after 15 years in business.

San Loco also has a location on Stanton Street.

Previously on EV Grieve:
It's official: San Loco is returning to the East Village

Damn. It's about time. We live in a desert over here.