The new Bean expected to open today on Broadway 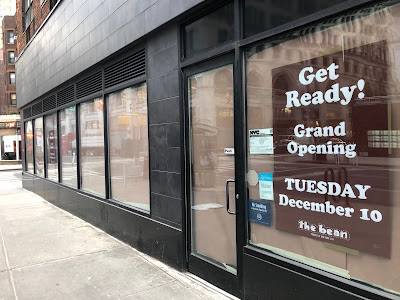 The Bean is expected to open today on the northwest corner of Broadway and Ninth Street.

The coffee shop closed its outpost on Broadway at 12th Street after service on Nov. 9 ahead of this move to the larger confines of 771 Broadway.

As reported in other posts, this storefront was previously a Starbucks, which shut down here back in January ... this after a conversion from the Starbucks-owned Teavana in 2016. (Also: This corner space previously housed Silver Spurs, the diner that closed in December 2013 after 34 years in business.)

The Bean is now down to two locations (here at 771 Broadway and over at 31 Third Ave. at Ninth Street) after the sudden closures of the chainlet's locations on First Avenue and Ninth Street and Second Avenue and Third Street on Nov. 24.

Owner Ike Escava told us the following: "Due to rising costs the decision to close was unfortunately the only one we could make."

Previously on EV Grieve:
[Updated] The Bean is taking over the former Starbucks space on 9th and Broadway

The 1st Avenue and 2nd Avenue locations of the Bean closed for good yesterday
Posted by Grieve at 4:09 AM