As the Bean moves on Broadway 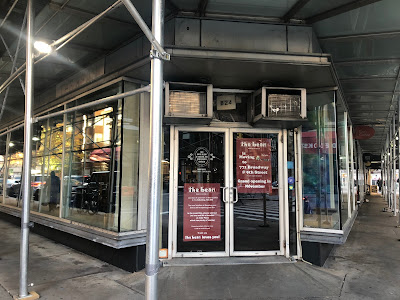 The Bean on Broadway at 12th Street (above) closed after service on Nov. 9 ... as the coffee shop relocates to a larger location three blocks to the south at 771 Broadway and Ninth Street... 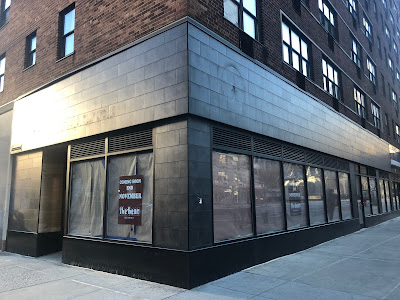 This outpost, a former Starbucks (and moment of silence for Silver Spurs), is expected to be open at the end of the month.

In total the Bean has five locations, four around here and one in Williamsburg.

Previously on EV Grieve:
[Updated] The Bean is taking over the former Starbucks space on 9th and Broadway
Posted by Grieve at 4:01 AM

The Bean seems to have developed a winning formula, with a Starbucks efficiency and predictability but with a bit more personality.

And it is owned by locals, not a monster corporation. Just wish they would bring the benches back to their location on 2nd Avenue and 3rd Street. Though I know they had issues with the homeless and shelter people who used to hang out there, it does not seem to be an issue for the Starbucks at the corner of 3rd and First Avenue, they have benches outside.

In between it being the long-cherished (well, kinda) Silver Spurs and a Starbucks, this spot was briefly host to an anemic ventured named..... TeaVana

Their food offerings are local and much better. I actually like 'bucks drip coffee better, however.

@Sophocles. Thats true, The Bean has much more of a friendly local big coffeehouse vibe vs. Starbucks which gets overrun by table squatters and rush hour crowds. The Bean also has better coffee and food than Starbucks. They have great bagels, and hey toast them, their pastries are better than the Entenmann-style pastries sold by Starbucks. Their coffee doesn't taste burnt, or oddly cloying like Think Coffee. I’d rather have Silver Spurs back in this location, but I’ glad The Bean is moving in as Starbucks continues to move out.

One reason why Starbucks is closing 150 stores this year may be the open bathroom policy, whcih is driving customers away in droves to smaller, less smelly coffeeshops. Starbucks bathrooms are much less clean, and more smelly since they left the bathrooms unlocked, which probably means they will reverse course and start locking their bathrooms again, or at least clean them more often. Via RTT News:

A new study showed that foot traffic at Starbucks stores declined after the coffee giant changed to an 'open bathroom' policy.

According to the study, store attendance per month at Starbuck stores declined 6.8 percent, relative to nearby restaurants and cafes, after the company made changes to its bathroom policy.

In May 2018, Starbucks announced a new bathroom policy, saying it will open its bathrooms to everyone regardless of whether they are paying customers or not.

The coffee giant's decision came following a backlash for the arrest of two black men while they were waiting at one of its Philadelphia coffee shops in April. The store manager called the police as the two men asked to use the bathroom without purchasing anything and also refused to leave the store.

Even taking into account new people brought in to the stores following the change in Starbucks' policy, the total number of visits was significantly lower, consistent with crowding of tables and bathrooms deterring customers, the study noted.
The study was based on anonymized location data related to 10,752 Starbucks stores from the period from January 2017 to October 2018.

According to the study, individuals visiting a Starbucks reduced the amount of time they spent in the store by 4.2 percent relative to nearby coffee shops after the new policy enactment by Starbucks.

I don't believe for 1 minute that open bathrooms is killing off their business. What's killing Starbucks is the new designs/renovations to their stores. The seating is really uncomfortable, there are fewer tables and the loud music is hostile. Why pay for that. You can't think. You can't sit comfortably and you can't talk without screaming. And they did it on purpose.

@Cmartyy You may be right, the new design is much less comfortable, attracts larger groups of loud people and after school kids, but the bathroom issue is also making the stores less comfortable and attracts bigger crowds. The timing will of the drop in customers is interesting as it coincides with the new bathroom policy.

The new bathroom policy might not be the whole reason for the customer drop, but it could be a tipping point on top of the redesign, or perhaps the entire Starbucks experience is so degraded now that people are looking for better destinations.

I would argue that they are also losing customers due to their new points based loyalty program, which is confusing and seems to offer fewer rewards. Mobile ordering could also explain why people are spending less time in store.

I wouldn’t be surprised if Starbucks leaked this story as an excuse to close their bathrooms again. Whatever the cause is, loyal customers are apparently going to Starbucks less often and spending less time there. This is good news for local coffee shops.

i love the idea of The Bean more than i love going there. Unpopular opinion perhaps, but coffee is just mediocre compared to other local shops (9th St Espresso, C&B, Coffee Project, even Think or Mud just to name a few).

non 2:32...I agree with you. Actually their coffee is overhyped and to my taste just blows.

Wasn't a huge fan of their drip, but I quite liked the space at 12th and Broadway. I remember going there on quiet winter evenings for tea, some kind of snack, and to finish a book. Hope the new location's as comfortable.