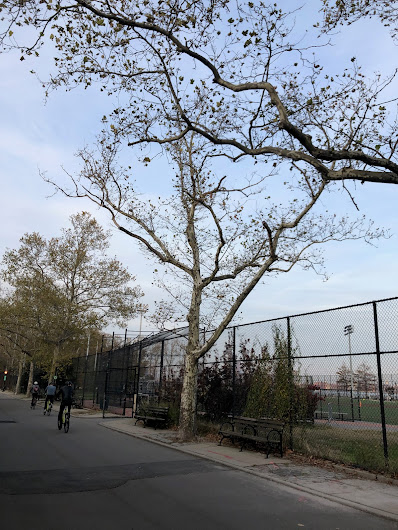 City Council is expected to approve the East Side Coastal Resiliency Project (ESCR), the $1.45 billion proposal to protect the East Side from future storms and rising sea levels, with a vote this afternoon. [Updated: They did.]

On Tuesday, the City Council Committee on Land Use signed off on the controversial plan that will bury/elevate East River Park by eight feet.

The activists behind East River Action were not impressed. They write:

There is little that’s reassuring in it.

For instance, the agreement includes a promise to study the feasibility of protected bike lanes to substitute for the greenway in the park. It will look into “future infrastructural reconstruction” surrounding the FDR Drive.” (Is that about covering the FDR with a park?) It “will conduct further feasibility evaluation to understand whether there is a potential for Interim Flood Protection Measures along the project area.” Once the City Council passes the flood control plan, the city has no obligation to do anything on any of those fronts.

In other headlines about the plan in the last day or two...

As for what's next, here's The City:

Thursday’s vote only approves land use changes necessary to begin construction on the plan. The final design — which will include specifics about what the new flood walls, park reconstructions and gate system will look like — is expected to go before the Public Design Commission in December, those with knowledge of the plan said.

If all goes as expected, work will commence in East River Park later in 2020.

It'll probably pass. It's clear the city doesn't really care about the feedback from the community or the effect that this construction will have on those whom use the park. They've had plenty of time to consider other feedback and they've been running to the finish line with fingers in their ears. How long did it take BdB to even walk down to the park and take a look?

I have lost faith in our city government and justice system. We as residents and neighbors cease to matter nor do the wildlife who use this beautiful stretch of land as their natural habitat. If they are going to build a mammoth sea wall in our neighborhood, they will need to build it around the entire island of Manhattan. Do you think that will happen? Not. Just us. I am tired of hearing bullshit excuses from officials whom we voted in who don't care about the ramifications of this decision, especially to those whom live in or near the projects that will be exposed to the hazardous conditions of this overhaul for years to come. The ripple effect will be felt for generations. Special thanks to our pathetic, oblivious mayor and his cronies who will be laughing all the way to the bank.

Councilwoman Carlina Rivera agreeing to pass a city plan that the community opposes after extracting promises from the city to maybe someday possibly thinking about looking into the idea of addressing some small set of the community's concerns? This seems so familiar for some reason....hmm, why can't I recall...oh well, maybe I'll remember later when I walk down 14th. But yeah, anyway, this all sounds great! What could possibly go wrong??!!

Gothamist ran an article on this and it was disheartening to read the comments, which were so dismissive of this. They even mocked the activists who attended the hearing.

I know internet comments are not exactly reliable, but if this is a sampling of how little other residents of this city care, it really is hopeless. Being called a NIMBY Boomer for protesting a plan that will destroy a huge swath of the city, and will directly affect the lives of thousands, is the general response these days. To those of us who call the LES home, who are committed to building and being part of a healthy community, this is devastating. This new plan is lipstick on a pig, and won't have any long-term benefits.

Yes, seems to be her M.O. act like things were achieved and rubber stamp what the mayor and real estate people told her and have her spin people tweet and email the great community success.

In her brief tenure already:

It's a land grab. Rivera and Chin are not "representatives" of the people. They only represent developers and real estate interests. We will remember at the next election.

"It's a land grab. Rivera and Chin are not "representatives" of the people. They only represent developers and real estate interests. We will remember at the next election."

Add in Powers too. Another REBNY shill.

"The community opposes this plan"

I'm in the community and talk to a lot of knowledgeable environmentally-minded and knowledgable neighbors and while I'm sure it could be way better (by say burying FDR), we need flood protection.

"They'll kill all the trees"

Yeah, so will the East River come the next hurricane.

"It's unfair to the projects"

Which lost power, in some cases for weeks and months, after the storm surge from Sandy knocked out the power plant.

I'm not an architect or an environmental engineer, and I'm sure this isn't the best plan the city could have put together, but it's something. We need to do something. More storms will come. We cannot fucking stick our heads in the sand. The water was halfway to Avenue B in places last time. Come on, people.

Yes. I will also remember next time in the election when I am at the voting booth. Guess what, Caralina and other supposed democrats? You're not getting my vote again.

All council men and women whom advocated for this should be ashamed of themselves for spearheading such a terrible, rotten idea. Thanks for destroying this gorgeous land for your own benefit. Good job!

Many of us aren't stupid or uneducated. We know what happened and what will continue to happen in spite of our reservations and opposition. I am very sad about this as you can see. I feel like our neighborhood is being severed with this new plan in place. What a reckoning or should I say burden to be faced with now.

This is what happens when there is ONE PARTY RULE... NO DEMOCRACY!!! PARTY over the public's interest.

It seems the only way to stop the destruction of ERP is a law suit... or the governor.

Let's hope somebody cares about the EV more than our elected officials.

"this isn't the best plan the city could have put together."

"Which lost power, in some cases for weeks and months, after the storm surge from Sandy knocked out the power plant." - 3:35p.m.

"The strike back with Con Edison’s four-year Fortifying the Future storm hardening program began in 2013 with the installation of more than 1,000 "smart" switches on its overhead system, submersible equipment that can withstand flooding, redesigned underground electrical networks, and numerous other steps to avoid outages."
https://www.coned.com/en/about-us/media-center/news/20171019/post-sandy-fortifications-prove-wise-1-billion-investment-customers

This is probably the nail in the coffin for any legitimate long term residents of our neighborhood. Bloomberg got his wish, he killed NYC. Welcome to the worst boutique corporate city in the world.

I for one support this plan and am glad it passed. I applaud Rivera, Chin, and Powers for their courage in pushing this through against a small but loud group of activists (well meaning though they may be) who keep moving the goalposts and seem only to be satisfied with the status quo.

We need protection from future storms and climate change ASAP, and we need to think long term. If the park isn't raised the next storm might well kill all those precious mature trees anyway (which are mostly non-native plants).

Nearly one thousand trees survived hurricane Sandy.
The city can plant more flood-friendly trees in addition to those already there, no?

Hey 8:54a.m. Thousands of people who signed petitions against this plan are not"a small group of activists."

It just seemed to interfere with FDR drive too much for all the car lovers.

A large group of NYCHA residents have signed a petition against THIS plan...not against flood protection.

In addition, the previously approved plan was agreed to by all the adjacent neighborhoods...and it was cheaper to build.

I am crushed to hear of the news with this moving forward. The shit show awaits us all. And, this is a sad day for all of us who loved this park. Five years my ass. Try ten. Considering the rendering of what this park will look like, I gather it will be the high line east. Thanks city council and mayor moron for approving this.