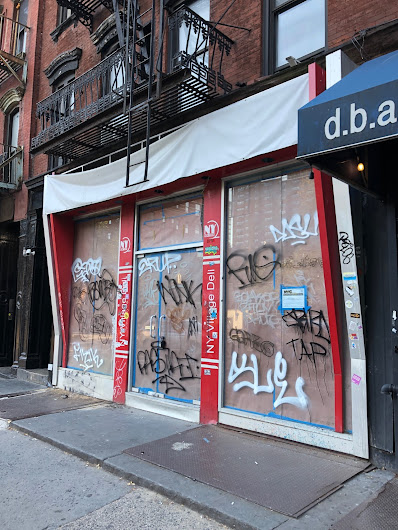 Renovations are now underway inside the long-vacant 39 First Ave. here between Second Street and Third Street.

According to sources on the block, a Popeyes Louisiana Kitchen will be the new tenant.

There's nothing on the recently issued work permits mentioning Popeyes by name. The architect of record does mostly work with fast-food properties.

So chalk this up to a rumor for now.

Popeyes has enjoyed a resurgence since the release this past summer of its pandemonium-inducing fried chicken sandwich ... which was recently re-introduced to a spate of violence at several outposts across the country.

There are currently 15 Popeyes locations in Manhattan, per the company website.

As for No. 39, the retail space has sat empty for nearly four years after NY Village Deli moved to a smaller storefront on the block.

The storefront was also tagged again in recent days. 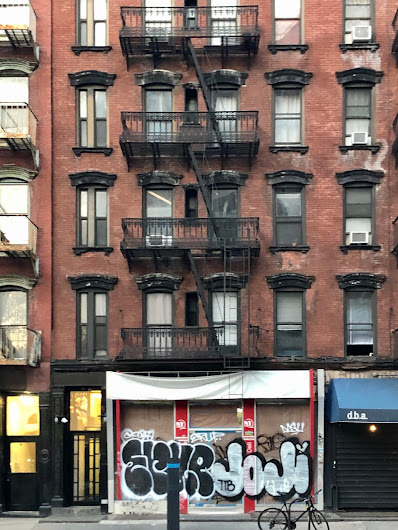 In other local Popeyes news... the Post reports that an East Village resident found half of a joint from a chicken sandwich he bought last week at the West 14th Street location.
Posted by Grieve at 4:10 AM

Didn’t we have a Popeye’s that closed at First and 12th or 13th, East side of First? I seem to remember one, and the chicken was raw and slimy.

I gotta admit, Popeye is the best when it comes to spicy chicken tenders. I treat myself every two months or so. It would be fab to have a location here in our hood. I just hope there are no lines, brawls or deaths over a freakin chicken sandwich.

The downfall of most great societies is usually preceded by people fighting over chicken sandwiches.

I have a Popeye's half a block away from me. Very hard to resist buying a fast food that tastes so good. But that is because it is fried and high in fat. Everything, the biscuits, chicken and side dishes have a lot of processed fat added. I try to limit to a couple of times a month also.

There was a Pudgies here one time. They should open a Jollibee here instead. If you have not tried Jollibee fried chicken, you need to have it. It is worth the trip to Port Authority area or Woodside.

My life has meaning again.

Wow, a chicken sandwich where you get fried....twice!
Maybe it's their version of A Happy Meal?

Why on earth are people losing their shit over a chicken sandwich? Just buy a brioche bun, take it with you to Popeyes, order the chicken tender meal, pay, bring it to the table, pull out the bun, place the chicken in the bun, and eat. Problem solved. No death or injuries to others. Why is it so hard for people to understand this let alone waiting hours in line? I like Popeyes, but not that much.

Or you know. Support places like Bobwhite Counter which makes chicken sandwiches 10x that of Popeyes and just as affordable.

Bobwhite is excellent for take out too. There is no excuse for being a patron of Popeyes or Chick-fil-a and also complaining about all the local shops closing.

Bua has an excellent chicken sandwich, believe it or not. Fries are very good too.

Anonymous Peachy McPeachface... Yes there was indeed a Popeye's on First Avenue on the corner of 12th i'm pretty sure, many years ago. Perhaps it did serve raw/slimy chicken but I remember it more for being shady as hell which was part of the draw. At least for us. We missed it terribly when it closed. Best, jg

Popeyes is my lifeline and something that’s been my go to for decades. I was so ecstatic for a Popeyes literally a block from me but after ordering a family size order of chicken, spicy of course - 11 pieces - I was thrown back that they wanted to charge me 1/2 dollar for each sauce packet after the first 2. I don’t think asking for 4 was overly greedy but whatever the case I rushed home only to be deeply disappointed as it was overly fried and dry. Not all Popeyes are the same - it’s definitely worth the extra 15 minutes to walk to the Delancey location near Essex for perfectly cooked Popeyes and 4 packets of bbq sauce for an order of 11 chicken pieces!