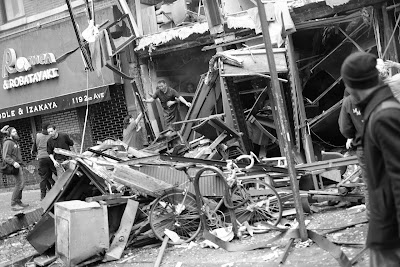 Following closing remarks by the prosecution, the jury deliberated for about an hour today before being sent home for the day, according to published reports. They'll resume tomorrow.

Jurors in Manhattan Supreme Court sat though more than two months of often-technical testimony about the massive explosion that leveled two Second Ave. buildings. Large pipes recovered from the scene were wheeled into the courtroom for the panelists to get a up-close view of the piping infrastructure.

The trial started on Sept. 9 in Manhattan Supreme Court.

Hrynenko, Kukic and Ioannidis each reportedly face up to 15 years in prison if convicted of top the counts.

CBS 2 has a report here.

I am hoping that jury will carefully deliberate all of the evidence presented in this case and pass a verdict of guilty on all three defendants. Justice must be served!!!

The charge is 2nd degree manslaughter- a class c felony. If found guilty she could get anywhere from 3 years to 15 years. Do she have a record? If not then expect the lower amount. These reports should give more detail on the charges and actual real world sentences. Criminally negligent homicide is a class E felony where the sentence is maybe 2-3 years with the person being released in 18 months. Dont assume they are getting the max. They wont. My guess us she gets 2 years on the criminally negligent homicide and does maybe a year or so and goes bankrupt.

And the 9 million they made from selling these lots? I'll guess that money is long gone.

Yes finally a Victory for Justice!!! All three defendants were found guilty by the jury today. Justice is served!!! Now it is up to the judge to sentence all three to lengthy prison terms.