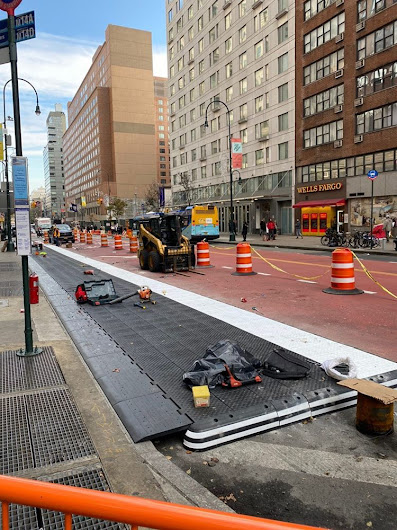 The city yesterday started installing a bus-boarding platform on the westbound lane of 14th Street between Irving Place and Union Square East for the M14 A/D SBS.

As previously reported, the DOT has installed these platforms at other locations throughout the city "to make it easier for customers to get on and off buses, give more room for pedestrians on the sidewalk, and help buses move faster as there’s no need to pull over to the curb saving up to a minute per stop."

The bus-boarding platforms are part of the 14th Street Transit & Truck Priority Pilot, which launched in early October.

In other transportation news, City Councilmembers Carlina Rivera and Ydanis Rodriguez are introducing legislation later today at City Hall to create two new agencies: an Office of Active Transportation and an Office of Pedestrians. More on this later.

Thanks to Nick Solares for the photo!
Posted by Grieve at 4:11 AM

So the city stops cars and trucks from driving on 14th street to increase the flow. Then it builds a loading platform to create another bottle neck? Idiots at city hall are ruining the city.

Used the one this morning newly-installed on the Zeckendorf corner - the bus stopped a foot away from the platform rather than right up against it, which made it tricky for a couple of the debarking senior citizens to figure out where to put their feet. And for someone with a cart or baby stroller? Should be interesting.

@9:25am: EXACTLY what I was going to say! They don't have time for the buses to pull over to the curb (which most of the buses don't bother doing in the first place) so now they're going to REMOVE space with these new platforms?

Although, with the shit-show that is the bus stop going westbound in front of the Con Ed building - where the ticket machines are way east, then you have the bus shelter, then several stanchions + a hydrant, and then ALL that Con Ed building scaffolding (which has been up for YEARS with no sign of any work being completed), and finally, at the western end you get the actual metal pole for the "official" bus stop, MAYBE one of these platforms will give riders a chance to board the bus without needing the broken-field running skills of a football player.

I can't tell you how many times I've seen the M14 pull up where BOTH back doors of the bus are blocked by the scaffolding. Somebody should make Andy Byford stand at that location until he understands the problem and decides to fix it.

Not correct. Trucks are allowed, cars are severely restricted but not banned.

"From 6AM-10PM, seven days a week, only buses and trucks will be permitted on 14th Street between 3rd and 9th Avenues. All other vehicles may make local trips, but must turn at the next available right. From 10PM-6AM, all vehicles may make thru trips along the corridor."

Just got off the westbound M14 at 8th Avenue at rush hour. The back doors of the bus opened directly into yellow police-tape barriers (thanks for nothing, MTA), and after I exited, I overheard 2 MTA workers discussing that if TWO buses pulled up at the same time at that stop, the new boarding platform was NOT long enough to accommodate BOTH buses. One worker said to the other "I know, but what can we do about it?" Uh, maybe someone could have thought about this BEFOREHAND?

Who's got the $$$$ contract to supply these platforms? Somebody's making good bank on these items!

Still do not understand why the tech Hub construction is allowed to take a whole lane, ridiculous and undermines it all