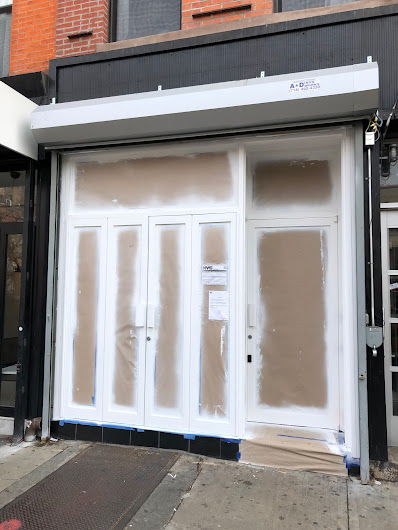 As we pointed out back on Sept. 30, Koko Wings, specializing in Korean fried chicken, is opening its second NYC outpost here. (The other is on West 106th Street.)

That 106th Street locale got a nice writeup via Westside Rag upon opening in 2014:

An opening day for the EV location hasn't been announced.

Despite good food and intentions, the previous tenant here, Chelsea Thai, closed after five months in business this past January.
Posted by Grieve at 4:00 AM

I suppose everyone has a friend that "makes the best chicken wings", but not all of us encourage them to open up a shop in the city. I'm glad there is more on the menu than just wings.

This city has an affinity for chicken wings. I can't parse it's origin other than "chicken wings are good". Next to plastic I think chicken bones are one of the bigger types of garbage found on the street.

Maybe another blog should be started for NYC chicken wing reviews?

Surprisingly I have had better Korean fried chicken in New York than in Korea. Turntable has exc.fried chicken though their EV outpost did not survive. KOOK on 6th Street has exc. wings and we also enjoy their bibimbap, gimbap, and various soups.