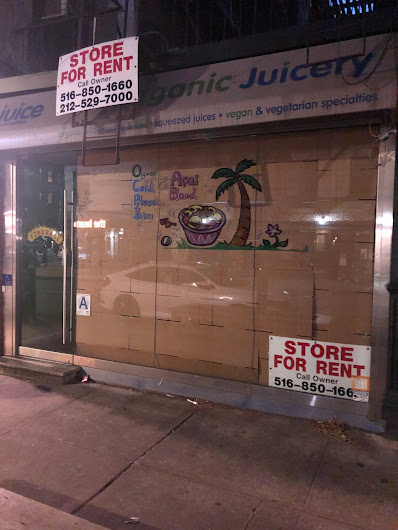 The beQu Juice (or Bqjuice) at 350 E. Ninth St. is now closed... as we noted, Wednesday was expected to be the last day in business here just west of First Avenue.

On Thanksgiving day, someone (the landlord? a juice-shop employee?) covered the front window with flattened cardboard boxes.

Bq — short for Beyond Quality — opened in January 2014 at the former home of the 9th Street Bakery, which closed in 2012 following a rent increase.

At the time, bakery owners Oleg and Tetyana Kucherenko said that they couldn't afford the 38 percent rent hike that the landlord was requesting with a new lease. They were on a month-to-month rent arrangement until the landlord found a new tenant.

Oleg told Gothamist in 2012 how much their demographic had changed.

"[It's got] nothing to do about rent, it's about business. It can't be generalized because the neighborhood in this spot really changed. Changed so much. I have maybe 5 percent of my customers left. I was fighting until the end, but it was already bad a year ago."

Man, what a bummer. Nice people, and affordable prices, especially in comparison to any of the other, more corporate organic places around. I guess we still have East Village Organic!

I spoke to one of the managers and he told me they were ready to move close by, but an investor backed out so they will probably have to wait until the spring to try again.