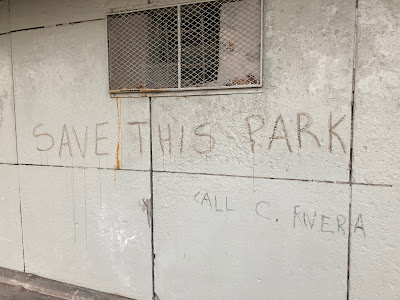 The City Council's final vote on the East Side Coastal Resiliency Project (ESCR), the $1.45 billion proposal to protect the East Side from future storms and rising sea levels, is expected on Thursday afternoon.

Meanwhile, this morning, the City Council Committee on Land Use will weigh in with a vote at 11.

Ahead of these crucial votes, the community pushback continues. Late last week, a group called NYCHA Speaks circulated a letter and petition "to speak out against the lies that are being told at our expense. We are not in favor of the demolition of our park!"

Their letter, sent to local elected officials, states in part:

These petitions are being submitted to you on behalf of nearly 2,000 NYCHA residents of Lillian Wald, Jacob Riis, and Baruch Houses.

These signatures have been collected over the past weeks to show that the vast majority of NYCHA residents do NOT support Option 4 of the ESCR plan. The East River Park has been a vital part of our community for generations, and the demolition of our park will have a devastating impact on the health and stability of our families.

To name just a few of our many concerns:

· The release of contaminants into the air during the demolition and landfill phases. We already suffer a high rate of asthma in our community.

· The negative effects of the loss of much of our local green space (including almost 1,000 mature trees) during the many years of construction. There are thousands of NYCHA families that depend on the East River Park for recreation, school sports, relaxation and family gatherings — in a community that has few alternatives.

Because this plan to demolish and bury the East River Park has received widespread opposition from the community overall, it has been particularly troubling to see how the DDC and City officials have used a very small handful of NYCHA representatives as their “vote of support.”

The staged appearances of these same 2 or 3 individuals in almost every ESCR Town Hall and Public Hearing has slowly created an outrage among NYCHA residents. These individuals are not speaking truthfully for their community! This petitioning effort is a reaction to what we considered was false representation on our behalf.

The Lillian Wald, Jacob Riis, and Baruch Houses suffered the impact of Hurricane Sandy firsthand, and we are aware of the need for flood protection. However, we do not want to sacrifice our park. We see the City’s push to demolish and bury the East River Park as an assault on our history, and on our continued presence in this rapidly gentrifying neighborhood. We understand that construction will need to be done to protect the neighborhood from flooding, but do not support the current plan that the City has chosen.

Last Monday, the City Council Subcommittee on Landmarks, Sitings and Dispositions voted for the plan.

Before the subcommittee vote, Mayor de Blasio announced the formation of a new community advisory group that will provide input on the design and construction progress in East River Park.

No word on who exactly will be part of this "community advisory group."

On Thursday night, officials from the Department of Design & Construction are scheduled to present updates on the plan before Community Board 3's Parks, Recreation, Waterfront & Resiliency Committee. That public meeting is at 6:30 p.m. in the BRC Senior Services Center, 30 Delancey St. between Chrystie and Forsyth.

I truly hope this is not passed for the impending harm will have irreversible consequences. Those whom have been afforded power by voters such as us should apply caution and concern for members of our beloved community. This council needs to step up and put our needs ahead of their own greed, and hence the complacency behind our pathetic excuse of a mayor, Bill De Blassio himself.

'No word on who exactly will be part of this "community advisory group."' - Well, going by the city's past history in such cases, I'm betting it won't have any members of the community who aren't in DeBlahblahblah's pocket.

Still waiting for an elected official to actually listen to the community, and stop the current plan. Everyone needs to keep up the pressure however they can. Guess I'll call Carlina Rivera's office yet again....everyone else, please do the same!

Disgusting plan. Destroying an environment and entire ecosystem is not the only solution! That is devastating. They probably want to make it some glossy, metal fake park like on the West side. Horrendous plan.

I am beyond disappointed and disillusioned with every public elected official who is supporting this plan. The loss of the biodiversity and trees in East River Park is going to be felt for generations. And all this destruction when there are much better plans to be had!

Look, I'll be honest, the oceans are rising whether we like it or not––the waterfront needs to be raised. The question for me is whether the current plan overly privileges maintaining FDR Drive––I'd rather we learn from SF and use the opportunity to shut down the waterfront highways rather than the park. But something needs to happen if we don't want our neighborhood to be completely flooded the next time a hurricane hits us.

Think of all the kids playing on fields in the park. Where are they going to go???!!!!

Anyone in their right mind and knows the facts would be against this plan all the way. For $1.45 billion they can't come up with a plan without destroying the entire park?! Can you imagine if they decide to destroy Central Park to build a flood barrier?

"But something needs to happen if we don't want our neighborhood to be completely flooded the next time a hurricane hits us."

Yes but not this BdB/REBNY/Construction-Union CF of a plan. Remember there was plan that had community input.

I fear the worst. Rivera will sell us out again.

@Anon. 4:435 PM, Rivera DID sell us out again, as shown in her pro-destroy-the-park speechifying at yesterday's City Council Land Use meeting where the plan was unanimously passed before going up in front of the entire Council.

Can you imagine if they decide to destroy Central Park to build a flood barrier?

"Judge Halts City's Plan to Raze Dozens of Trees in Fort Greene Park"
https://gothamist.com/news/judge-halts-citys-plan-raze-dozens-trees-fort-greene-park
"On Thursday, New York Supreme Court Justice Julio Rodriguez III ruled to place a temporary restraining order on a $10.5 million renovation of Fort Greene Park, concluding that there were gaps in the city's processes and that officials need to better back up their claims that the work wouldn't have a significant environmental impact."