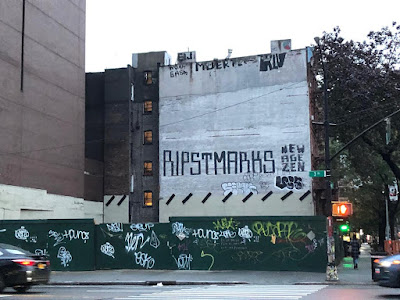 All has been quiet on the northeast corner of Third Avenue and St. Mark's Place since workers cleared the lot in late summer of the assemblage of buildings that housed Korilla BBQ, the Continental and McDonald's, among other businesses.

For the foreseeable future, the RIP ST. MARKS message, which arrived over the summer on the west-facing wall of 5 St. Mark's Place, will continue to greet passersby.

As you likely know, a 10-floor office building with ground-floor retail is in the works here. The total size of this new building has yet to be officially determined. Real Estate Equities Corporation (REEC) wants to transfer the air rights from the landmarked Hamilton-Holly House at 4 St. Mark's Place to add more square footage, a move that has plenty of critics.

In June, the Landmarks Preservation Commission voted to support the plan, and has issued a report to the City Planning Commission to allow the proposal under a specific zoning resolution.

The City Planning Commission will likely sign off on the project next as part of the city’s Uniform Land Use Review Procedure. City Council will have the final say on the Morris Adjimi-designed building. Those meeting dates have not yet been made public. (This Zoning Application Portal provides a project status. The most recent activity by the developer: filing the Land Use application on Oct. 3.)

Meanwhile, the financial elements are coming together for the project.

This press release — citing square footage even though it hasn't been determined — landed in our inbox last Friday:

Madison Realty Capital (MRC) has provided a $48 million senior loan for the funding of a $79.1 million financing package for the development of a mixed-use office project at 3 St. Mark’s Place ...

The property is well-located at the corner of St. Mark’s Place and 3rd Avenue in a section of Manhattan’s East Village that has seen significant growth in demand for quality office space from a mix of tech, finance, law, and family office tenants in recent years.

The site is adjacent to 51 Astor Place, a 400,000-square-foot office and retail asset developed by Minskoff Equities that is home to anchor tenants IBM Watson and St. John’s University, in addition to a strong retail roster that includes Shake Shack, Flywheel, Bluestone Lane and Orange Theory.

In reporting on this financing, The Real Deal noted:

The developers will be eyeing rents in the area of $150 per square foot. Such figures were once only seen in the most expensive locations in Midtown but now are commonplace for newly constructed office buildings in areas like the Meatpacking District, Soho and Greenwich Village. 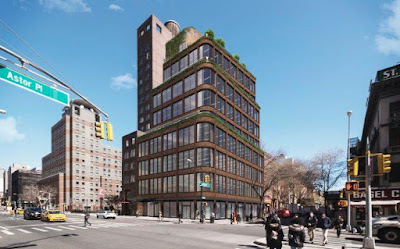 Madison Realty Capital, who provided the senior loan, is a familiar name for some EV residents. In the fall of 2015, they loaned $124 million to Rafael Toledano, a then 25 year old with no track record as a landlord so that he could buy a portfolio of 15 buildings, mostly in the East Village. He eventually defaulted on Madison's loan.

Live at 1 St. Mark's Place this summer; views of 51 Astor Place are free
Posted by Grieve at 4:10 AM

Yep - come the time I retire in three years, I am outta here. There are so many nails being hammered into the EV coffin that pretty soon it will be made of solid steel.

Wow! And that is said with horror and apprehension. The developers pitch says "for family offices." That means family trust offices. The 1% needs a "cool" downtown location to run their empires and rule the minions from. Change is inevitable but this is just appalling. Perfect companion to the Dark Star across the street sucking all the light and space out of the EV. Urban equivalent of Pete Seeger's "Little boxes on a hillside... ticky tacky..." #Pitchforks #vivelarevolution

Yep, glass boxes made of ticky-tacky and they all DO look the same!

I'm sure Shake Shack will deliver, so the occupants won't have to ever besmirch themselves by crossing the avenue.

I wish my mother could see what's become of my neighborhood b/c when I moved here, she bemoaned that I was going to be "living on the BOWERY"! (Add in sound of gnashing teeth.)

Sad madison Realty Capital can't keep up the Toledano portfolio of buildings they are already holding in the east village through the Bankrupsy and there management Silverstone Property group .Our building is rotting from the inside out with Lead Dust issues ,waterbugs ,rodents ,leaks ,and just covers up mold with paint continually ..I hope the AG continues to keep there eye on them

I wish my mother could see what's become of my neighborhood b/c when I moved here, she bemoaned that I was going to be "living on the BOWERY"! (Add in sound of gnashing teeth.)

When my parents drove me down here from Connecticut in 1980—to start college—I had to ride back with them and my dad was livid. "What are you trying to do to us?" he demanded. He chain-smoked all the way back up I-95.

See, Mom and Dad, it all worked out.