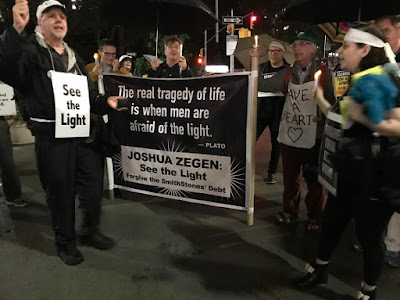 In the rain on Tuesday evening, members of Tenants Taking Control, a coalition of residents from buildings formerly owned by Raphael Toledano, along with the Middle Church Jerriese Johnson Gospel Choir and the Cooper Square Committee, held a march and vigil to urge Madison Realty Capital (MRC) to end their pursuit of nearly $250,000 in legal fees from the SmithStone family.

The congregation of activists, clergy, and community members assembled on Union Square and later marched to 24th Street, where the group held a candlelight vigil outside the apartment of MRC’s co-founder and managing principal Josh Zegen, urging him to release the family from the responsibility of paying the corporation's legal fees.

Here's background on the situation via the Cooper Square Committee:

In October 2003, the SmithStone family moved into an apartment at 233 E. Fifth St. They opened the nonprofit Phoenix Theatre Ensemble a year later. Their theatre offers a full season of performances as well as lessons in theatre to aspiring actors, seniors and kids in local public schools.

Their building was purchased by Raphael Toledano in 2015, with a loan from Madison Realty Capital. The fledgling landlord asserted that the family’s apartment had lost its rent-stabilized status in 2003 and sued to retake possession of the unit, but the family opposed Toledano’s claim, arguing that the apartment was rent stabilized. The legal battle lasted 34 months. In the midst of it, Toledano defaulted on his loan. Madison Realty Capital reclaimed the properties as de-facto landlord and continued prosecuting the lawsuit.

In June 2018, the Appellate Division of NY State Supreme Court ruled against the family, and Madison Realty Capital immediately began eviction proceedings. Due to a clause in their lease, the SmithStones are now being held accountable by Madison's lawyers for Toledano/Madison Realty Capital's legal fees, amounting to about $250,000. As dedicated artists and educators with 3 college-age children, these fees would be disastrous to the family.

Here are a few scenes from Tuesday's march and vigil... 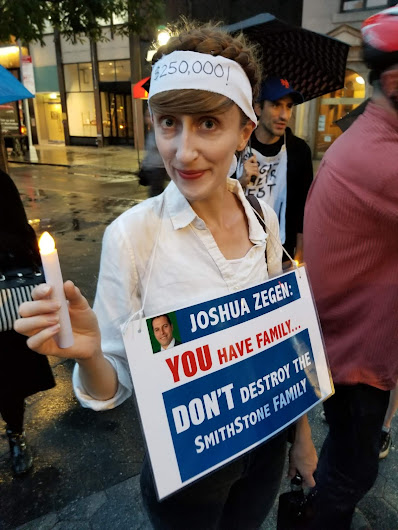 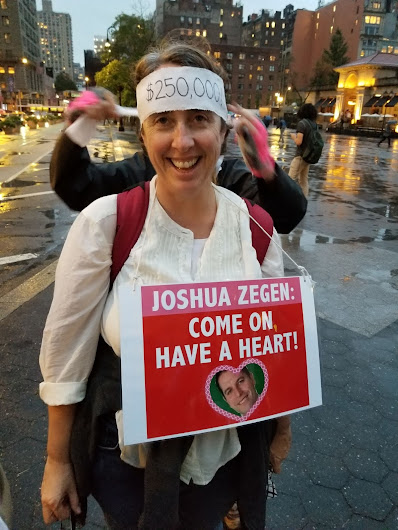 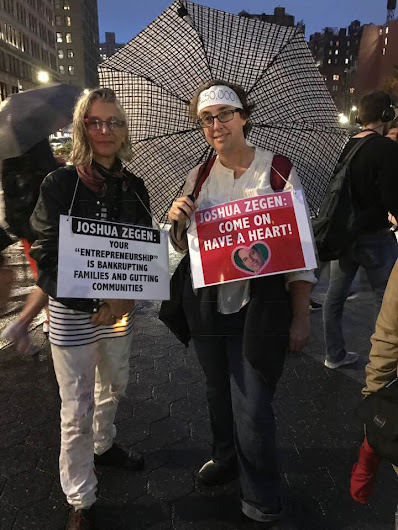 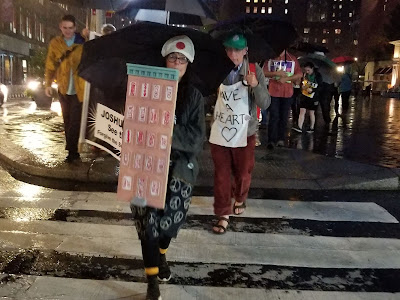 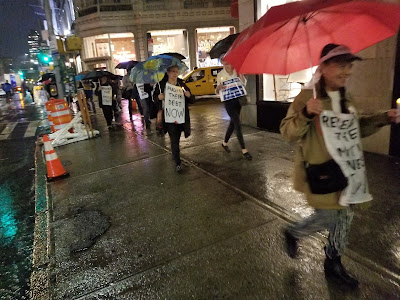 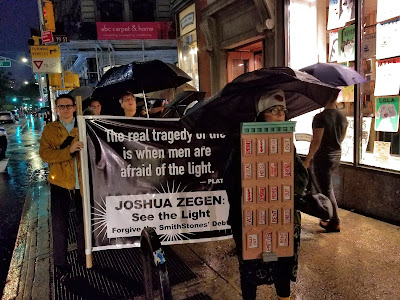 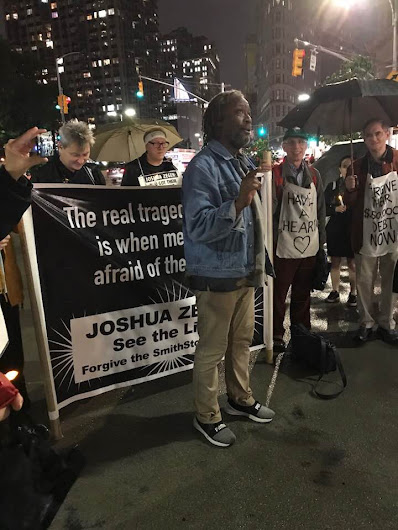 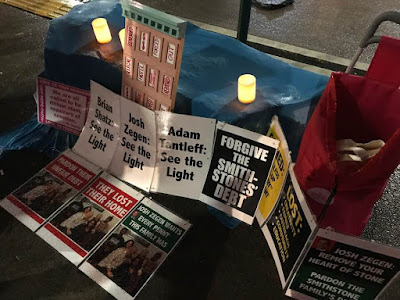 This is the second SmithStone rally for the group. On Aug. 23, Tenants Taking Control, supporters of the family and Assemblymember Harvey Epstein also gathered outside Zegen’s home, calling on Madison to drop their pursuit of the legal fees.

The court date to decide whether the family is subject to these fines was adjourned until early November.

Photos via the Cooper Square Committee.

Smith/Stone is a warning to all tenants who think they can challenge the landlord. In merry ole England, bodies were left hanging for days for all to see as a warning - DON'T STEP OUT OF LINE. As much as things change... The real estate industry knows they have a friend in the White House and Gracie Mansion.

It is a warning. Legislation is needed on the attorney fee clause that is in most NYC leases. It is not a level playing field between developers and tenants and it provides further leverage to landlords and predatory investors. We miss the EV. But pls know that Elected officials have been very proactive in assisting us with Councilmember Carlina Rivera’s Office taking the lead.

First of all, I’m very sympathetic to the Smith Stone family.

But, I understand they entered into a lease contract where they agreed to reimburse legal costs as they are now bein*asked. I would assume that during their 34 month long suit to fight their eviction that their own attorney must have warned the family.... “if you lose, you are going to be obligated to reimburse as massive legal bill. Are you sure you want to keep going? “

How is this different from going to an expensive restaurant and continuing to eat and drink, then not having the money to pay the bill at the end of the meal?

This apartment was the rent-stabilized home of this family for over a decade. Like many other middle-income people trying to live in this city, rent-stabilization was the only means by which that was possible. They were active members of the community, who run a not-for-profit theater with educational programs for schoolchildren, aspiring actors and seniors. So, losing them has been a kick in the teeth to this community.

Three years ago, the building they lived in was bought, along with 23 others, at about double the assessed value of the properties. The only way to make a profit -- the only way not to lose their shirts -- was for the new owners to remove as many rent-regulated tenants as possible, gut renovate and rent the units out as market rate apartments at much higher rents. This is known as predatory equity.

Strategically, the new owners decided that they could challenge an aspect of the rent staibilzation laws that had been in place for many years, and thereby gain a new legal status that would help their business plan. They did. They succeeded. The family was evicted.

Yes, the SmithStone family knew about the clause in their lease that would make them liable for the new landlord's legal costs. They had the option of meekly saying, "Okay, well, you want this apartment to be market rate, so we'll leave it." But it was their home. They could not afford to find a different apartment in the neighborhood at twice the rent.

So they made a courageous decision to fight it in court. They were fighting not just to keep their own home, but also to protect the rights of hundreds of other rent-stabilized families in the city, who could otherwise be removed at the whim of a predatory landlord.

But the landlord won, and can renovate this apartment and re-rent it as market rate. And other middle income people across the city can expect to lose their rent-stabilized apartments.

The landlord is a successful corporation -- a private investment firm. It can afford to pay its $250,000 legal costs for this battle. This family will be bankrupted if it has to. For the landlord to insist on this seems both unethical, and a poor business decision.

First of all, I find the photos of people rallying for this family very moving. Second, renting in NY is brutal. If you want to move, the problem is, legally under the terms of 99% of the leases, you are locked into your lease, so either find a new place that matches the end date of your lease (so hard to do in this market), or pay for 2 apartments at same time, or break the terms of your lease.