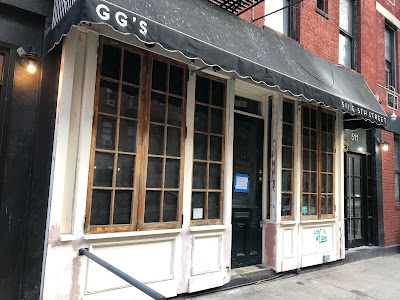 Interior renovations started in earnest last week at 511 E. Fifth St. between Avenue A and Avenue B.

As previously reported, Emmy Squared was originally thought to be taking over the space. (Emmy Squared instead opened on First Avenue at Fifth Street.) And No. 511 remained in a dormant state following GG's departure last December.

The Hylands reportedly went to "grilled-pizza mecca" Al Forno in Providence, R.I., on their first date while they attended Roger Williams University.

Eater had more about grilled pizza:

It’s known for being crisp on the bottom but tender inside, with some smokiness from the grill. There’s not a lot of it in NYC, which is something the Hylands are familiar with after making Detroit pizza happen here with their breakout hit Emmy Squared.


The still-unnamed grilled pizzeria, which is expected to open in November, per New York, will also offer non-pizza dishes such as housemade pastas and grilled fish.

Previously on EV Grieve:
Emmy Squared's owners are bringing grilled pizza to the former GG's space on 5th Street
Posted by Grieve at 4:00 AM