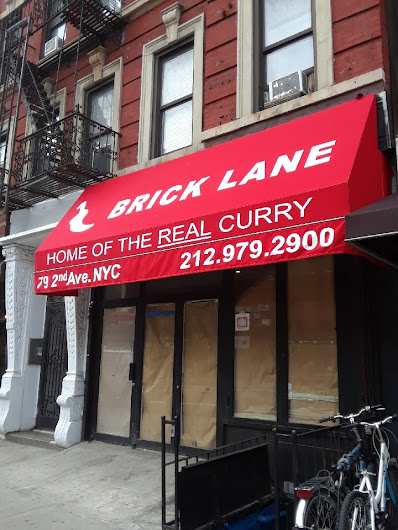 Work continues at 79 Second Ave. between Fourth Street and Fifth Street, where the new location of Brick Lane Curry House will be opening later this fall.

The new awning just arrived, looking as hot as its phaal dish. As Eater noted, the British-style curry is made with tomato, ginger and at least 10-12 ground whole chillies. (Eat it and get into the Phaal Hall of Fame.)

The restaurant left its space one block to the north at the end of August.

Calexico, which serves Cal-Mex food in several NYC locations, is expected to open an outpost at 99 Second Ave.

Thanks to Lola Sáenz for the photo!

Previously on EV Grieve:
On 2nd Avenue, Calexico in the works with Brick Lane Curry House on the move

Brick Lane Curry House closes ahead of move down the block
Posted by Grieve at 4:18 AM

Actually, this will be their fourth EV address. They started at 342 E6th Street, where The Eddy is now.