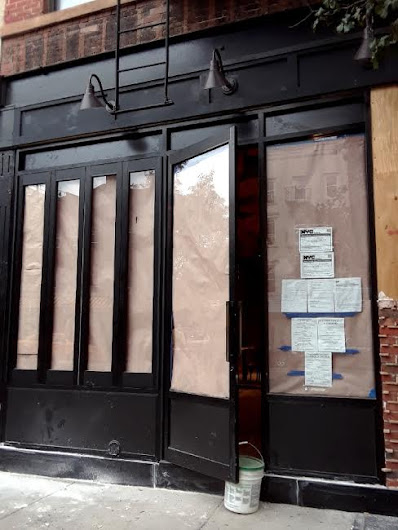 Renovations continue over at 171 Avenue A between 10th Street and 11th Street.

We don't know too many details just yet about the restaurant, which will serve Szechuan cuisine and dim sum. CB3 OK'd a beer-wine license for the applicants back in July. According to the applicant's questionnaire on file at the CB3 website, the unnamed restaurant plans to be open from noon to 11 p.m. Sunday through Thursday; until midnight on Friday and Saturday.

EVG regular Lola Sáenz shared this interior pic from the other day... 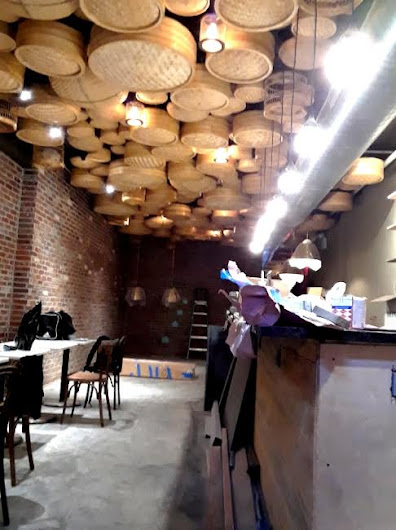 Hopefully the new venture will fare better than the previous two establishments here. Chao Chao, a contemporary Vietnamese restaurant, closed without any notice to patrons in May 2017 after six months in business. Chao Chao evolved from Soothsayer, which opened in January 2016. Soothsayer, from the same operators, also closed without any notice to patrons at the end of September 2016.

No 171 was also the onetime home of Rat Cage Records and 171A, the illegal club-turned-rehearsal studio that produced records by Bad Brains and the "Polly Wog Stew" EP by the Beastie Boys.
Posted by Grieve at 4:00 AM

Email ThisBlogThis!Share to TwitterShare to FacebookShare to Pinterest
Labels: 171 Avenue A, new restaurants

I'd like to see a restaurant called Bad Brains; in this neighborhood, the reference would probably go right over most people's heads.

The great East Village Chinese food bonanza of the late aught-'teens marches on. While not a huge Chinese food fan myself I am seriously impressed at the magnitude of this movement. I can only imagine that the people who love the cuisine are in total heaven these days.

"I can only imagine that the people who love the cuisine are in total heaven these days."

I am a huge Chinese food fan, and I am very pleased with some of the new offerings, and I have also rediscovered X'ian. On the other hand, I am not that into noodles, and I don't understand why so many noodle shops are opening, except that there must be an enticing profit on bowl selling for $12 or $14....