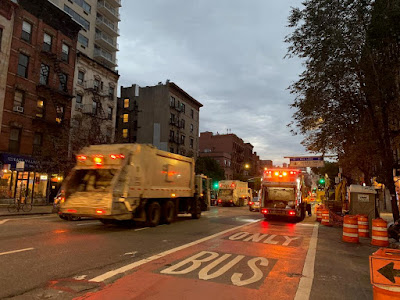 [Photo from yesterday by Vinny & O]

As I first reported on Sept. 18, the Department of Sanitation (DSNY) is now using part of 10th Street west of First Avenue to park garbage trucks.

The DSNY no longer has use of their garage at 606 W. 30th St., and are relocating their fleet elsewhere, including 10th Street and at Pier 36.

This move has sparked numerous complaints from residents and merchants alike who have called out the problems with the smell, noise and negative impact on business.

The story has since received a good deal of press coverage. Here are a few updates.

Mayor Bill de Blasio promised to “relieve the immediate pressure” on a residential street in the heart of the East Village that has become a parking lot for Department of Sanitation vehicles.

“Do we want garbage trucks parking on residential streets? Of course not,” said de Blasio. “What we’re trying to do every day is figure out the kind of facilities that will help avoid that in the future.”

Per Patch on Wednesday:

• This is what the DSNY has to say about the move to 10th Street and other East Side locations.

Per The Villager on Tuesday:

[T]he Sanitation Department says that this is the only option until another garage location is secured.

“In short, we’ve been working for years to find garage space, which is the only solution,” said Belinda Mager, the department’s spokesperson. “This is the option of last resort, and what’s needed to be able to provide essential services to the district.”

• This is getting ugly.

A feud over garbage trucks parking on a residential street in the East Village heated up Thursday after a New York City Sanitation Department employee was captured by a surveillance camera dumping trash out of his garbage truck into a planter on E 10th Street between First and Second Avenues outside Pinks... 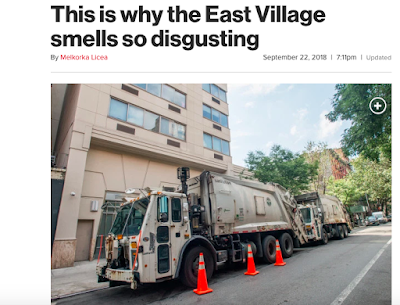 Aside from 10th Street, garbage trucks are also being parked by P.S. 184 on Cherry Street on the Lower East Side. CB3 District Manager Susan Stetzer told me that she's also receiving complaints from many parents there.

Rivera and CB3 officials will be meeting with DSNY officials early next week.

Previously on EV Grieve:
Questions and concerns as the sanitation department begins using 10th Street to park garbage trucks
Posted by Grieve at 4:31 AM

Let’s not forget that the new Sanitation Garage planned for 25th St. near the FDR was put on hold for political reasons. It’s almost as if the Dept, of Sanitation is saying “Fine, we’ll just park our smelly garbage trucks in your nice neighborhood until you approve our new garage.” It’s a move worthy of Tony Soprano himself.

A couple of things here first De Blasio and his sponsors REBNY took away land dedicated for these trucks and sold it to the highest bidder for luxury housing. Vital services which the Sanitation Department was created for now seem expendable until the mounds of garbage start piling up on every block. Pickup in the neighborhood is no longer on schedule spastic at best.

You can compare the Mayors push to create nightlife in the LES now that all the edges of the island which was never residential and where people went to party now have luxury housing instead.

The Sanitation department I'm sure hates not having a proper facility to keep its equipment and are making a statement. I wish however that statement would have been make outside of Gracie Mansion or some posh street on the upper east side.

I think the obvious choice for parking these garbage trucks would be by Gracie Mansion and on the block where de Faustio's house is where he charges market rate rents and pays less property taxes than lower earning homeowners in less niche towns in the five boroughs.

The EV held hostage... DAY 10... The best our ONE PARTY RULE pols can do is have a meeting on Monday?! Oh and I'm glad our fearless leader Carlina Rivera, the Duchess of Detritus, has finally become involved. Ok, I'm joking about being glad. What difference is she really going to make in a ONE PARTY RULE city.

Since the Nightlife Mayor has already miraculously solved all of out late night noise-related problems, the only solution is to name a Garbage Mayor to solve our trash problems. Since Rudy Giuliani isn’t available right now, I nominate EV Heave for the position. Based on the track record of the Night Mayor, it should only take one meeting followed by a bottomless brunch happy hour for the new Garbage Mayor to fix the problem.

I nominate co-mayor Chrilie McCray Wilhelm. She seems to like multitasking (like how she controls the allocating of funding for the mayor's fund of new york and her useless mental health program) as well as coattailriding her REBNY stooge husband as he sells out his constituents so he can be a national figure. Certainly she can master this sudden herculean task.

To those real estate overlords at Hudson Yards; have you no sense of decency? And where pray tell are you going to store all that refuse coming from that tower pestilence utopia you all are constructing??

These trucks don’t even serve the EV! The businesses on 10th St won’t survive this. This is such a burden on the residents of 10th St. These trucks need to be moved to a commercial area immediately!

We at Gouverneur Garden's at the Lower East Side certainly have been enduring with what we have for too long , FDNY, EMT , Su Casa , etc... we don't want it !

We at Gouverneur Garden's at the Lower East Side certainly have been enduring with what we have for too long , FDNY, EMT , Su Casa , etc... we don't want it !