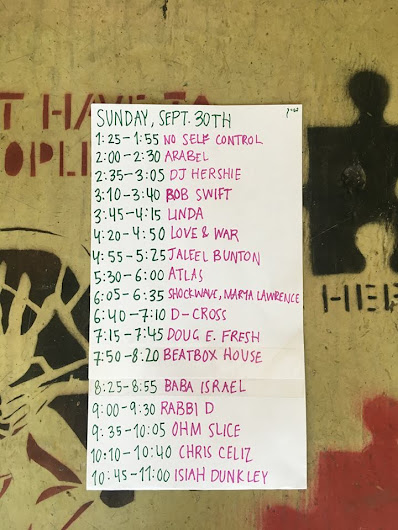 Today is Day 2 of the F*ck Cancer! Benefit for Kid Lucky at the Museum of Reclaimed Urban Space/C-Squat

An originator of the art of beatrhyming, musician and activist Kid Lucky will be supported by a community of musicians and deejays in his fight against cancer in a full slate of musical performances September 29 and 30. Suggested donation $20 per person.

The photo above has a list of today's performances, including Human Beat Box Doug E. Fresh, expected on around 7:15 tonight.

The benefit is at MoRUS/C-Squat, 155 Avenue C between Ninth Street and 10th Street.
Posted by Grieve at 12:30 PM

Email ThisBlogThis!Share to TwitterShare to FacebookShare to Pinterest
Labels: benefits, the Museum of Reclaimed Urban Space

He had the place jumping!