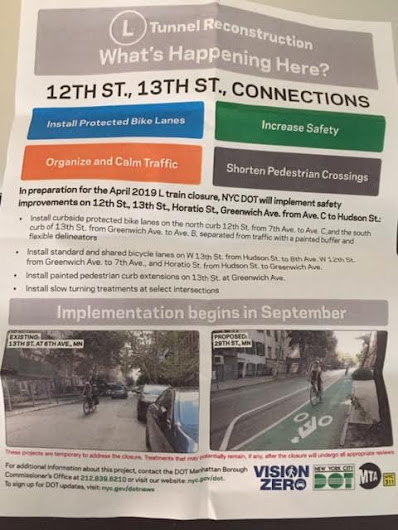 An EVG reader who lives on 12th Street shared the above flyer... found slipped inside the front door of her building yesterday.

The flyer provides information about protected bike lanes that will be implemented starting this month on 12th Street and 13th Street (as well as Horatio Street and Greenwich Avenue) ahead of the April 2019 L-train shutdown.

Back in June, the DOT made public its bike-lane plans... scrapping its original idea for a single, two-way bike lane on 13th Street in favor of two separate, one-way lanes for 12th and 13th streets.

The DOT shared this info in a tweet on Tuesday as well...


Ahead of this work on 14th Street ... EVG regular Pinch noted the other day that the city removed the flexible stanchions that helped divide 14th Street at First Avenue... 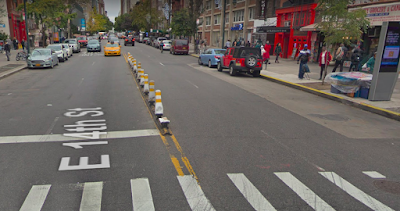 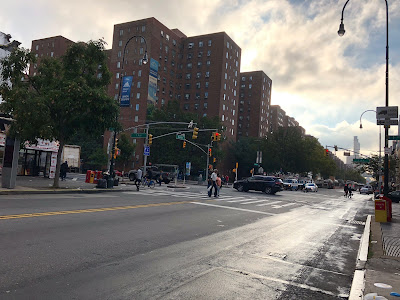 You can find the city's full transporation plan during the L-train closure at this link.

I ride a bike every day. This is the last thing we need on 12th & 13th streets. It's already difficult enough to park with all the Uber drivers double-parked everywhere. I don't need a bike lane to get down the street.
I hope they can be convinced to change their minds on this stupid proposal.

I live on 12th St and I can tell you this will create chaos on alternate side parking days. As it is now large trucks which are too often using our block instead of the wide 10th or 14th street. will find it impossible to pass. Too many people are too quick to hit their vehicle's horn at the slightest delay and there will be hell on our block going forward. Things have finally calmed down with the completion of some of the large construction projects on Ave A and that Target building on 14th which brought cement and dump trucks down our streets day and night. There is some bike "traffic" on our block but usually just my immediate neighbors and a dedicated bike lane is overkill here.

Good thing the DOT utilized emojis so the residents that they continue to insult the intelligence of can clearly understand.

The best piece of news that I saw in a while. Me and my family have been waiting years for this. Being part of the majority of people who are living on these blocks we do not own a car. Chaos will not erupt on Alternate side parking days if the loud minority who park their vehicles for free on city streets will move it for 1.5 hours twice a week. My children will be able to ride their bicycles safely to school every day instead of using the narrow, crowded sidewalks. Every person who uses a bike is one less person who uses an Uber.
Every child who rides to school means less school buses clogging and polluting our streets. The city is growing, the neighborhood's population is growing and we need more space for people, not for storing private vehicles.

@Choresh Wald
With all respect I have never owned a car or ever owned a driver's license. I stopped riding a bike several years ago when dealing with clueless pedestrians and aggressive drivers made me realize it was not worth it. Short blocks like we have in the EV don't need bike lanes, the avenues however do. Some of your neighbors run businesses on street blocks and need vans and trucks to make pick ups and deliveries. These businesses serve the neighborhood and as it is becoming nearly impossible to run a small business in today's city this plan would only it even harder.

These plans seem to have created by people who are just looking at a map and have no understand of how these blocks actually work.

Totally agree with you re: businesses curb access. The city needs to reserve dedicated loading zones on every block for commercial vehicles and for drop off and pick up of passengers. The space is there if you eliminate free parking for personal vehicles.

I feel badly for all New Yorkers these days. Your government has created absolute chaos on the city streets, and the DeBlasio administration has doubled down on what Bloomberg started.

I shudder when I imagine what the EV and LES are going to be like during the L shutdown. I pray for the safety of my friends and family, some who are getting vulnerable in their years, and hope that they don't face life threatening circumstances, because ambulances can't always get anywhere quickly and Beth Israel is closing down.

The city MUST do something about the sheer number of Uber/App Hailing type vehicles on the streets, and for chrissake, make the subways run like they used to !

I do not at all understand the fixation with attempting to fix some non-existent issue with respect to the movement of people within Manhattan due to the L train. A miniscule percentage of L train rides started and ended in Manhattan. I live two blocks from the 3rd Avenue stop and probably have been on the L train less than 5 times in 15 years.

The city needs to get the folks along the Brooklyn side of the L train to other subway hubs in Brooklyn, i.e., Borough Hall and Barclays. That will enable them to get to/from pretty much anywhere in Manhattan. A bike lane has no relevance to the L train issue whatsoever. And, if they are going this route, they should eliminate all free parking the whole way, as there no longer will be an "alternative" side but only one side (occupied in some places by Citibike racks).

bus lanes aren't going to do shit if it takes 15 minutes going through traffic between ave b and 1st.

This has been an awesome improvement. Anyone who lives on 12th st knows that most of the issues were caused by double parking trucks causing situations where traffic couldn’t get through followed by endless honking and people basically fighting in the streets. The bike lane gives cars room to safely navigate around these double parkers. The result: No more honking!