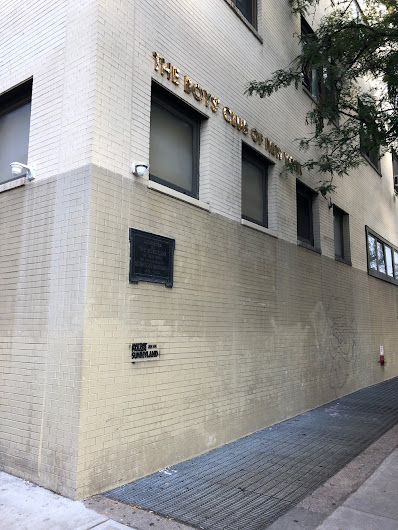 Local elected officials are speaking out today to urge officials at the the Boys' Club of New York (BCNY) to postpone their plans to sell the Harriman Clubhouse building on 10th Street and Avenue A.

Manhattan Borough President Gale Brewer, Senator Brad Hoylman, Councilmember Carlina Rivera, Assemblymember Harvey Epstein, and representatives from Manhattan Community Board 3 will hold a press conference to demand that the Board of Trustees for the Boys Club of New York postpone the sale of the historic 117-year-old Harriman Clubhouse on East 10th Street.

Attendance at the Harriman Clubhouse, particularly from boys and young men from lower-income families, has increased in recent years despite claims of enrollment made by the board to justify the sale.

I first reported on the BCNY's plan to sell the Clubhouse. Under this plan, the 7-story clubhouse would remain in use by the BCNY through June 2019. (You can find more background here.)

According to a letter in June from BCNY Executive Director Stephen Tosh, they will look to rent space somewhere on the Lower East Side to continue with programming for Harriman members after the closure next summer. The letter also states that the sale of the East Village building will allow BCNY the opportunity to start new programs in other communities, including Brownsville, East New York and/or the South Bronx.

Last month, Hoylman and other local elected officials asked for a community meeting to hear more about the BCNY's plans.

As Patch reported yesterday, Tosh declined the meeting offer in a Sept. 14 letter. "Our role in the neighborhood defines us. It is also bigger than any one building. Wherever our East Village clubhouse is situated, we remain a vital part of an ever-changing area."

Hoylman told Patch: "We'd lose ... a crown jewel of youth and civic engagement precisely at a time in our city's and nation's history when we need these institutions for boys and young men. What we're concerned about is that its services might be non-centrally located and that the clubhouse would be converted into condominiums and hotels, which would be a double whammy for the community."

The rally starts at noon today outside 287 E. 10th St. between Avenue A and First Avenue.

Boys' Club of New York selling East Village building; will remain open through June 2019
Posted by Grieve at 8:30 AM

I was happy that something is being done about the Boys' Club scam - the redevelopment of the property @ 10th and A. But the only person who could stop the Boys' Club is Mayor Bill. At this point the Dog & Pony Show is just that. The Dems want the real estate industry's campaign contributions and n-o-t-h-i-n-g will stop them... even the good of the children.

This is really so upsetting to read - this building and the Boys Club was so great for my son - they have a swimming pool, free dental care, and recreation. Everyone there was so welcoming and supportive - its what every community needs - the Boys Club can't possibly claim to be able to build anything similar to this in the neighborhood these days - I am really really so sick and pissed about community properties such as this , as well as, for example, what was Cabrinin Nursing Home on 5th and B turned into condos. Like the only people who matter are investment bankers or whatever these people do who can afford these condos - yes, the CITY should do something about this - STOP THE SALE !!!!

The BCNY is not owned or run by the government . It is a private foundation established to serve the most needy communities. It’s board of directors is charged with this task of serving and in doing so must manage the assets and operations as it sees fit. The BCNY serves all NYC communities - not just the East Village.
The BCNY operated during 2017 with $10.2M of revenues only $500k (or 5%) came from governmental grants. The rest were investment income and grants.

The fact that the BCNY has decided to sell its property in the East Village is not one that can be interrupted by our local government. The board has no doubt identified that the EV has turned he corner. It is no longer one the city’s most needy areas. And, in fact it’s clubhoise in the EV when sold will generate such cash that the board will be able to continue the mission of the BCNY in serving other, more needy communities.

Look at it this way, the BCNY has served the EV well. It has helped improve the development of the community and its residents. And, now is no longer so desperately needed.

Your comments are self-serving. The community that is served by the BClub is still in poverty. Just because the EV average income might have risen because of recent renters, it doesn't mean that the incomes of the families using the BClub are going up.

The other excuse used by the BClub was that the EV BCub is underused. But as pointed out in a post that it's use is equal to the average of other clubs 47-49%.

Then there's the sop that the BClub will find alternate space in the LES. So the LES has more poverty with all those massive high rises? You must be joking.There's more income in one new building on Houston Street than on the whole of Ave D!

I'd like to remind you that poverty is poverty whether in the EV or LES.

I'll give you credit for posting your version of reality. BUT IT'S A SCAM. You're just providing "cover" for our less than honest pols who work for the party not the people they represent.

If you don’t like the reality that the EV has been gentrified, don’t blame the BCNY or me. The BCNY is not responsible or beholden to the government, the politicians or even the people of the EV. The BCNY as well as many others know that a Whole Foods, an Equinox gym, another upscale condo and perhaps a boutique hotel belong on the corner of 10th & A rather than a clubhouse.