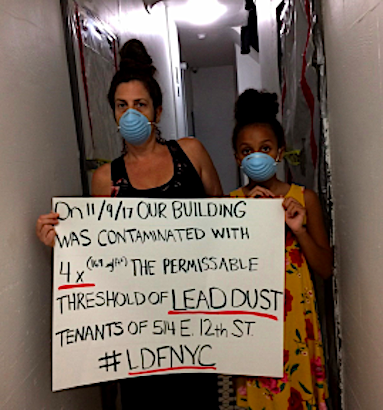 [Photo via the Cooper Square Committee]

City Council is taking up new legislation regarding lead and is holding a joint oversight and legislative hearing tomorrow morning.

Ahead of that, the Cooper Square Committee, working with local residents and elected officials, released a statement as well as a series of photos that "tell a story of lead contamination."

Tenants from the Lead Dust Free NYC (LDFNYC) coalition are releasing a series of photos showing the faces of lead dust contamination. As elected officials focus more on the issue of lead in NYC housing, LDFNYC urges them to crack down on landlords who contaminate buildings with lead during construction.

Lead contamination arising from unchecked construction dust has hit Lower East Side (LES) tenants hard over the last five years. Landlords like Samy Mahfar, Steve Croman, Raphael Toledano, and Icon Realty have all exposed tenants to lead through this form of contamination. In response, LES tenants have formed this campaign and assembled these photos of themselves to highlight the extreme lead exposure they have faced through construction dust in their buildings.

While tenants applaud new legislative efforts to stop lead poisoning, they want to also bring attention to the lax enforcement of existing laws. NYC’s predominant lead law is Local Law One of 2004. It was enacted fourteen years ago and many aspects of the law, which would help protect tenants from lead laden construction dust, are simply not being enforced.

"We have had multiple lead violations at 514 E. 12th St. The last violation placed found lead dust at four times the EPA standard. I do not believe Local Law One is enforced," said Holly Slayton, a longtime East Village resident whose doctor advised her and her daughter to wear face masks in their own home during renovations in their building (pictured above). "I had to call city agencies continually to get the dust tested and the landlord to follow the proper Local Law One protocol."

Back in May, City Council member Margaret S. Chin introduced legislation to empower city agencies "to stop dangerous and dirty construction before it sickens tenants and their families."

In 1960, New York City was one of the first municipalities to ban the use of lead paint. In 2004, Local Law 1 set a goal for the City to eliminate lead in all residential buildings by 2010. Eight years past that deadline, it is clear that there is still more work to be done.

Under current law, landlords must perform annual checks for lead-based paint hazards in multiple dwellings built before 1960 with units that house children under 6 years old. Landlords must also perform a check whenever an apartment becomes vacant. To remediate the problem, landlords often paint over the lead paint surface. Because paint is susceptible to chipping or fading, this only creates a temporary solution to the presence of lead.

Intro 873 pushes for a permanent solution by requiring landlords to permanently remove or encapsulate any lead paint once a unit becomes vacant.

Intro 874 would increase inter-agency coordination when construction work blows lead particles into residential units and common areas, and also allow the City to issue a stop work order if a unit has received a notice of a lead-based paint hazard.

These two bills, sponsored by Chin, were introduced as part of a legislative package of 23 bills to expand the City’s oversight over lead paint, decrease the threshold for elevated blood lead levels that trigger investigation, improve inter-agency coordination and call for reporting to assess the impact and effectiveness of the City’s lead prevention measures.

Meanwhile, according to a new report by the New York Lawyers for the Public Interest, city officials have never brought a case against a landlord for failing to inspect their apartments for lead since the law was enacted requiring such inspections. Read more at the Post.

Ongoing concerns about demolition work and elevated lead levels in Toledano-owned buildings
Posted by Grieve at 4:30 AM

Dreadful. And I wonder how effective those masks are. If Holly S. or other tenants are interested in pro bono legal assistance, please contact me at rnh141@gmail.com

Oh look! Comments from elected officials. Why are elected officials and the law always behind the times? Granted, these first-term folks had nothing to do with any of this and it's a decades-old problem. So do something, or get out.

I've been contacted by Dairylea Milk and Whole Soy Drink about putting Rivera's picture on their cartons. I suggested a group shot of our local Dem elected officials. What do you think? Lost?