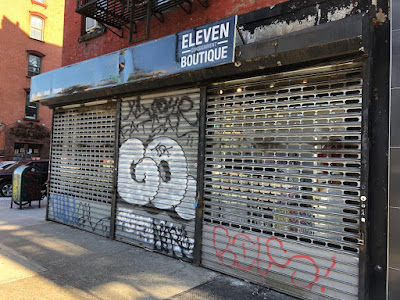 Eleven Consignment Boutique closed on First Avenue and 11th Street some time in late November or early December, angering customers who had items for sale inside.

Bklyner recently reported that the Park Slope outpost of the high-end used clothing and accessories store closed in the fall in similar fashion: with no notice to customers.

Danielle, who declined to give her last name, is a singer and songwriter. She said she consigned with Eleven Consignment Boutique a few years ago and had no issues. This year was different.

“I have over $500 worth of stuff to Eleven Consignment’s East Village location in November and despite calling, emailing, physically going to both locations which are now shuttered 24/7, and reviewing the business on Yelp and Google, I can’t seem to get my items back or any money owed to me if they sold,” Danielle said.

A new owner apparently took over the store in recent months. Attempts to reach him have been unsuccessful. Meanwhile, one-star reviews continue at Yelp: "Just shut down without any notice to people with $100s of dollars in consignment. Crooks."

Some patrons have filed fraud complaints with the New York State Attorney General's office.
Posted by Grieve at 4:20 AM

They are crooks. Same thing happened to me with the now shuttered Cadillac’s Castle on 11th street. Myself and a good handful of others tried getting our items and money owed. We wrote reviews on yelp and google but all got deleted bc they were reporting them to the sites. I think a few people filed suit, but personally my items weren’t worth as much as it would to lawyer up. Sucked that I lost my items to these selfish people. They never responded to us and the landlord wouldn’t contact them on our behalf. Just all around shitty people.

Everyone needs to learn how to sue in small claims court. You don’t need a lawyer, you just need to research the steps or read a book from Nolo that you can get from the library. Those complaints are toothless unless the AG chooses to prosecute, and those reviews on a closed business are completely useless.

I too got scammed by them. I called and emailed any number I could get.
I guess my only course of action is small claims and reporting them to the state.
The more people that file claims the better.

They suck. They took like 40-50 items from me, claimed they were "abandoned " by me which was not true. When I agreed to the store credit they were close within a few weeks.