Last Christmas for Zum Schneider on Avenue C: Biergarten on the move in 2020 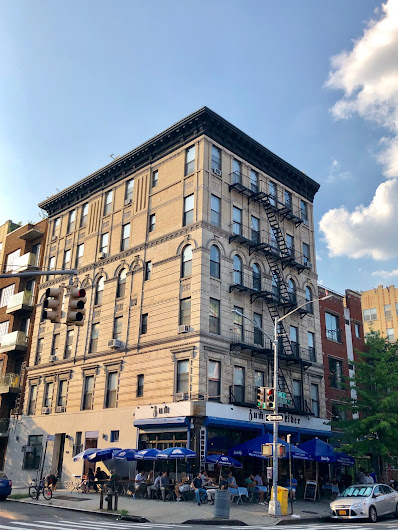 In early 2020, Zum Schneider will be be moving away from its 20-year-old home on the northwest corner of Avenue C and Seventh Street.

As we understand it, the landlord is not renewing the lease of the popular Bavarian bierhaus and German restaurant. (The landlord, listed as 229 East 7th Street HFDC, unsuccessfully tried to evict Zum Schneider in 2006.)

"Yes, it's rather sad after 20 years, but the East Village seems to have the trend that storefronts become empty and stay empty for years," said owner Sylvester Schneider. "Strange development."

Schneider said that they will start looking for a new location in early 2020. Meanwhile, the kitchen closes on Feb. 2, with Feb. 25 serving as the last day for Zum Schneider on Avenue C. They'll be closing out with the annual Karneval party, held Feb. 20-25.

Zum Schneider opened on Avenue C in August 2000, and soon became a destination for World Cup and Euro Cup matches as well as events such as Karneval and Oktoberfest, which they later moved to a tent along the East River.

Schneider also serves as Mösl Franzi, the frontman for the house Oompah band, the JaJaJas.

From a pre-Oktoberfest article from September in The Red Hook Star-Revue:

Schneider is, undisputedly, the heart and soul of the restaurant, whether he’s behind the drums or not. His pervasive energy, enthusiasm and joy have made it a jubilant place since it opened. He’s often seen hopping up onto the benches and bar, leading the entire place in rousing singalongs, or creating spontaneous dance parties.

But he was a musician first. Born in Wessling, a small town outside of Munich, he moved to America to become a drummer. He played in rock bands in Boston and NYC in the ‘90s, before he opened Zum Schneider, which instantly stood out for its uniquely authentic German coziness.

Schneider said that Zum Schneider fans could sign up for their newsletter online for updates about the move next year.
Posted by Grieve at 4:35 AM

This is so lame. Why are landlords doing this?
Well I hope Zum finds a place near by.

> "Yes, it's rather sad after 20 years, but the East Village seems to have the trend that storefronts become empty and stay empty for years," said owner Sylvester Schneider. "Strange development."

This is terribly dumb. I don't understand landlords, do they just exist in contempt for their tenants? Zum Schneider is a wonderful addition to the neighborhood always bringing song and joy. I'm sure I'm not alone in saying that it will be dearly missed. Just strolled by two days ago and was pleased to see a packed house with holiday cheer, and I don't even like Christmas music.

This is a terrible development

In all fairness, and I’ve spent many a enjoyable time there, I wouldn’t wish living over it or even adjacent to it on my worst enemy.

They hiked the rent. In the long run they think they can make more with a different tenant.

A horrific error in judgement by this coop board they will miss the rental income which helped (I imagine a lot) with the maintenance on a old building. This was a place to come, enjoy great beer and Bavarian food,it has a character of it's own distinctive. And as the years have gone by with more young families moving in more children have been part of the brunch and evening crowd often sidewalk caulking the floor. Not many places parents are comfortable with toddlers down here.

Ave C is full of closed fronts some open briefly to close with in a year. For fifteen years I have come here and enjoyed every beer and potato dumpling I had here.

I believe it will be vacant for a long time. I will be here for the final night and Prost but if and what replaces it will never have my patronage. Stupidity deserves no reward.

Zum, Please consider making a move to Avenue B south of 7th or lower Avenue C. Plenty of vacancies and you'd be a great addition down that way!

When they first opened vowed never to enter, ten years later I capitulated. Weird, but maybe the hdfc residents had noise or other complaints?

I live across the street and even during Oktoberfest or the World Cup, when they are packed, they are not a problem. They are a welcome part of Ave. C and although I never go there I am sad to hear they are leaving.

Surprised to see non annoying people loved this, it always seemed like frat douches crowding in there so I never went in.

The food is good there. If you can bear the "BRUNCH" crowd, *sigh*, they make an amazing omelette, properly done, not overstuffed and gross American style.

I think that the rent was unfairly low and the lease very advantageous to the tenant. Maybe more facts should be known before judging the HDFC board.

If rent was indeed too low they could have negotiated a higher rent. But they voted not to negotiate at all. Now their rent is zero.

Heard from a fairly reputable source that the co-op board is currently in negotiations with a monolithic purveyor of over-priced, bitter coffees and stale pastries (company's name rhymes with "Barf#&ks") to open an intimate "concept" shop, whatever the hell that means. Alas...

I do live adjacent, we hear them, but it’s fine. Zuch a great part of the neighbourhood.

Ah, yes Sylvester mentioned that EV Grieve was trying to reach him, and here you are!

As (hopefully) "non-annoying" persons, my husband and I have been going to Zum regularly since two weeks after they opened. We welcomed old and new staff, saw customer's (and Sylvester's) kids grow into adults and enjoyed a cavalcade of memorable regulars. We watched World Cups, Euro Cups, celebrated birthdays, sang with old friends and met new friends. One time a patron's dog stole a sausage rightt out of our friend's hand; we all laughed, the dog's owner bought him another sausage, and we all enjoyed a lovely evening at the communal table.

Yes, there were bros and drunks and assholes along the way, but they were more than countered by the camaraderie of Zum patrons, young and old, from NY and around the world.

I don't know the details of why the landlords made this decision. I'm hazarding a guess that a St*rb*cks can make money, but it won't make memories.

I really have come to dislike the neighborhood changes and nyc in general. Its really sad everything that has happened. After more than 10years in EV I think it’s time for me to go

Zum Schneider is as close to a grownup family-friendly European style bar, which attracts responsible adult drinkers, that the East Village has ever had, Their World Cup events were packed, but the patrons know how to handle their beer. I remember the moment that Germany lost a World Cup match one year how quickly the place cleared out, and within minutes it was almost silent. Like The Bean, it is a neighborhood gathering place that also serves good food. There are a couple of other bars nearby, but none has the level camaraderie you always experience here. If only landlords understood that community is much more valuable, rewarding and memorable than money

I was, you might say, a founding father of Zum and spent many a merry night enjoying the delightful atmosphere, the company of good friends, and the generous friendship of Sylvestor, who, during hard times, never allowed my Wienstephaner glass to be empty for long.

I'll never forget the night about a week after 9/11 that Sylvester joined me and 3 of my bike messenger comrades on a ride down to ground zero to see if we could help out with the recovery efforts. I ended up breaking my shoulder when I hit a curb(because most of the street lights weren't operational), but Sylvester made it down there(I think).

A few years later he hosted a memorial for one of my friends who was killed in a bicycling accident.

This is the reason we need to support the Small Business Jobs Survival Act (SBJSA), to keep rents affordable for business owners, and remove the variable of a greedy landlord who thinks he can jump the rent x5 to get a tenant out fast.

It's been happening for years, people; stores are hanging on by the skin of their teeth, and everyone knows it.

It is bad business to close a restaurant that has been doing good for so many years and replace it with a Starbucks when business is going down. Yankee deli has better coffee than Starbucks...

Don't forget this is still the ghetto. Good luck when the undesirables start hanging out there fucking up your restroom. At least the customers at the BEER spot had class.

Everytime it was crowded and I passed by they would move before I ever had to say excuse me and they made the corner feel safe. I don't drink beer so I never ate there but I see the workers and they always kept things clean outside. Oh well these dumb ass landlords and retail real estate agents don't know shit. That's why Amazon can do what they do.

From a 25 years perspective, the whole last 10 years seem the same drek.

As others have said, Zum Schneider was as close as NY gets to a nice airy pub to go with friends & family to have a few drinks, good food and conversation. Since 2002 I've spent many lazy Sunday afternoons there, with friends and family, and indeed it never felt inappropriate to go there with kids. For one reason or another, I haven't been back in several years now, but I would be heartened to see it doing well everytime I passed by. February is still some time away, so I'll try to steal at least one more lazy Sunday before it closes. On another note, with Edi & the Wolf also gone, this ends the modest resurgence of German food in what, in times long gone, was a German neighborhood.

We always felt welcome at Zum Schneider with our young son--they would give us chalk for him to draw on the floor with friends while we enjoyed a German breakfast (which I'll miss greatly). Thank you!

As a longtime resident of the East Village, I have noticed that the neighborhood has been losing some of its most iconic spots at a fairly alarming rate. With this, do you all think this is a problem that the local communities can solve? I understand that at the moment, the landlords have the ultimate say, but can't help to think there's a way to leverage the loyal customer base to get in front of these things before they happen.

Wow - I'm shocked it's closing - I'm sure the HDFC coop could have raised the rent and made more $$ - I'm sure the HDFC coop board will regret this decision - so many shops and vacancies on Ave. C. But on another point, I'm sure the bar was very loud and probably made it hard to live in the coop - so who knows. I hope they move further south on Avenue C - lots of empty places and close to the old location so they won't lose patrons.