Now hear this: About the new book of East Village bar quotes from Billy the Artist 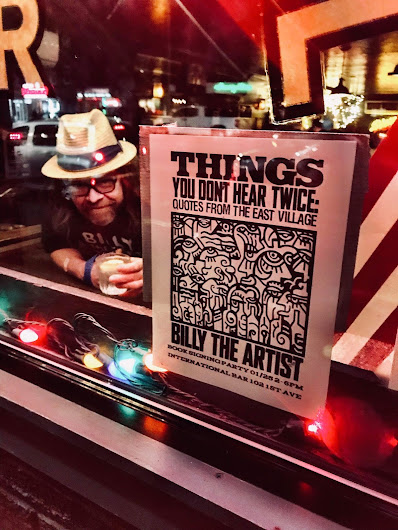 Billy the Artist is never without his sketchpad, which aided him with his latest project — a book of illustrations with snippets of conversation titled "Things You Don't Hear Twice: Quotes From the East Village."

The copies just arrived ahead of a signing this Saturday at one of his favorite neighborhood haunts — International Bar on First Avenue.

In a recent exchange, he shared a little about the book and his thoughts on the East Village ...

I’ve lived in the East Village for 30 years and have always loved the vibe and people here ... I almost always have my sketchpad on me and would draw in my various East Village bars and, of course, hear the craziest quotes from my friends or strangers. I would write down the quotes in the back of my sketchpad and that’s how this book became a reality.

Living and working in my studio in the East Village I need to get out and be with people — be it in the afternoon or night. As I’ve gotten older, I tend to like the daytime in a bar because it [attracts] more regulars.

This book has been in the making for a long time, and both the quotes and illustrations I hope remind everyone how great the East Village was and still is. 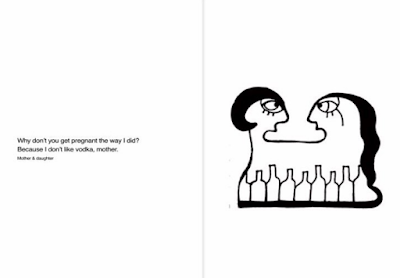 Billy the Artist will be signing copies of his book this Saturday (Feb. 1) from 2-6 p.m. at International Bar, 102 First Ave. between Sixth Street and Seventh Street.
Posted by Grieve at 5:00 AM

Email ThisBlogThis!Share to TwitterShare to FacebookShare to Pinterest
Labels: bars, Billy the Artist

Grieve, know which local shops will be stocking the book?

I’ll ask him. I think he may be selling them via his website.