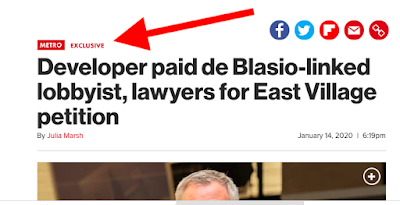 A developer paid an ethically tarred City Hall lobbyist — and the law firm that defended Mayor Bill de Blasio against pay-to-play allegations — to press the administration for permission to expand a 10-story office tower in the East Village, The Post has learned.

The Landmarks Preservation Commission, whose 11 members are all mayoral appointees, approved plans by Real Estate Equities Corp. to enlarge a building at 3 St. Marks Place that’s 20% larger than limits allowed by the area’s current zoning laws.

The plan was approved in June, although the $200,000 the developer paid to de Blasio lobbyist James Capalino and the law firm Kramer Levin Naftalis and Frankel LLP, were not reported at the time.

Correct, it was not reported at the time in June 2019 — it was actually reported several months earlier, on Feb. 13, 2019 in an EVG piece titled "The lobbyists behind the air-rights transfer and zoning variance for 3 St. Mark's Place."

Anyway! The Post article includes several quotes about the project, now making its way through the city’s Uniform Land Use Review Procedure (ULURP). Here's local City Councilmember Carlina Rivera, who holds the crucial vote on the special permit to transfer air rights from the landmarked 4 St. Marks Place to increase the size of this development:

“I continue to share the same concerns that many in our community have brought up, including Community Board 3, regarding this project and its impact on the surrounding area, and I have not seen anything new presented that would make me consider it favorably as it proceeds through ULURP.”

This corrupt good for nothing Mayor d'ASSIO needs to go (straight to Federal Prison).

Carlina better get it together and come out against his corruption or she'll be a one termer.

NY Post stealing from EVG yet AGAIN! We all know who the journalist with integrity is. ;)