Kissaki debuts on the Bowery this week 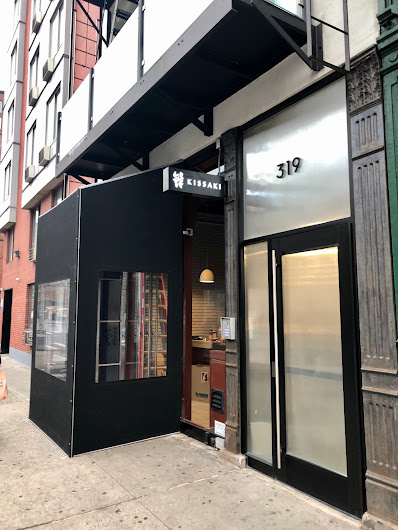 Kissaki opens on Wednesday here at 319 Bowery between First Street and Second Street. (We first reported on this arrival back on Sept. 3.)

Mark Garcia, a former chef and partner of sushi bar Gaijin in Astoria, is among those behind this venture that features a 16-seat Omakase bar and a small dining area. There's a cocktail lounge coming soon.

According to the Kissaki website, they'll offer lunch and dinner service. The omakase menu in the evening runs $160 for 12 pieces of seasonal nigiri, three kaiseki-style prepared plates and one dessert.

As previously reported, the restaurant is the first retail tenant for the former Amato Opera. In January 2009, Anthony Amato, the company's 88-year-old founder, announced that he had sold the building that was home to the opera since 1964. Amato Opera staged its last performance in May 2009. (Earlier history: The four-story brick building was a cigar factory from 1899 to 1926.)

Previously on EV Grieve:
• Life after the Amato Opera

• Costume drama on the Bowery as the Amato Opera empties out

• Work permits arrive at the former Amato Opera on the Bowery

• Residential rentals at the former Amato Opera on the Bowery start at $10,995

• 2nd acts: Sushi counter for the former Amato Opera on the Bowery
Posted by Grieve at 4:13 AM