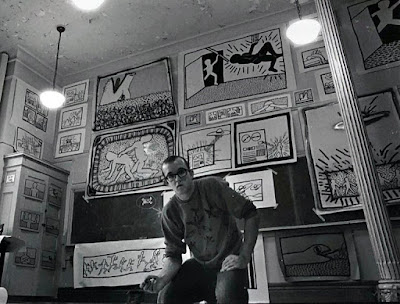 Performance Space New York (formerly P.S. 122) is entering its 40th year... and on this occasion, the nonprofit arts organization, housed at 150 First Ave., unveiled a new partnership with the Keith Haring Foundation. Moving forward, their main space will be known as the Keith Haring Theatre.

In 1980, Keith Haring received a studio residency within P.S. 122’s building (above), where he developed his iconic painting style. He fluidly engaged a variety of disciplines — as seen in his curating of performance, “Acts of Live Art” two blocks from here at Club 57 — and in his street art, exhibitions, and collaborations combined a playful sensibility with trenchant social commentary and, in the late 1980s, HIV/AIDS activism. We share and draw inspiration from Haring’s drive to bring together diverse voices and artistic media to create a body of work that captures the spirit of our time.

In addition to naming the theatre, the grant will also fund an annual, free-to-the-public Keith Haring Lecture Series, as well as the Keith Haring Curatorial Fellowship.

This opportunity considers what’s ahead through those artists who, in our vital past, looked at the alternative futures art and activism could imagine and catalyze. We feel immense gratitude to everyone who has supported us over the last 40 years and made this moment possible.

The rebranded Performance Space New York returned to a refurbished building at the northeast corner of First Avenue and Ninth Street in January 2018 after a few years away at alternative venues.

Gee, maybe this will give them the funding to (re)renovate the lintels that were so poorly worked over by the city that the scaffolding, that has been up forEVER (at least 80% of the last 20+ years), can come down again...? Wishful thinking, I fear...it'll probably be 2040 before that sidewalk sees the light of day again.