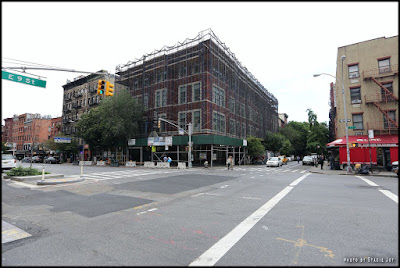 The 122 Community Center on First Avenue at East Ninth Street is in the midst of an extensive, multi-year gut renovation.

Among other upgrades to the infrastructure, the former school will have new stairwells, an elevator and full ADA compliance. The renovation also opens the building by creating space for public use, including an outdoor courtyard, a large gallery and other shared spaces for meetings and community gatherings.

The city is paying for the upgrades — estimated at $35 million — as part of a code renovation to the circa-1894 building. The Department of Cultural Affairs owns the building at 150 First Ave. and leases it out to 122CC, the nonprofit organization managing the space. The AIDS Service Center NYC, Mabou Mines, Painting Space 122 and PS122 are the four organizations that comprise the space.

Last Tuesday, Community Center reps led a group of people, including several local media outlets, on a behind-the-scenes tour of the site. EVG contributor Stacie Joy was along for the preview and shared these photos of the work in progress. 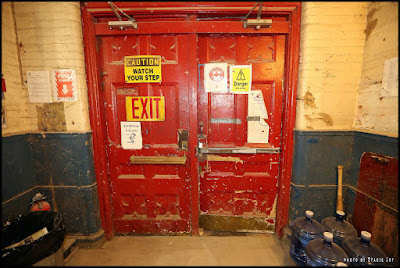 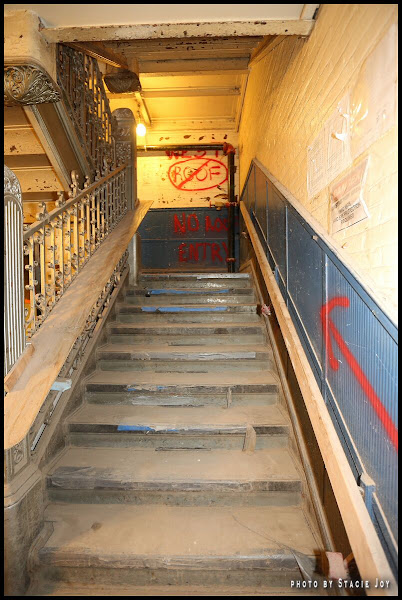 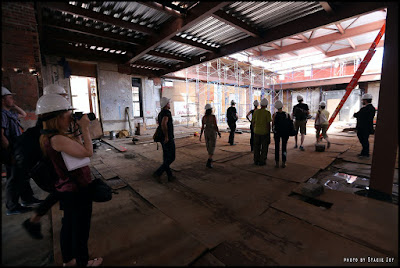 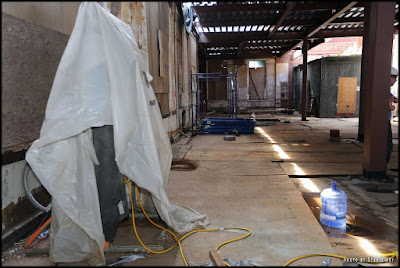 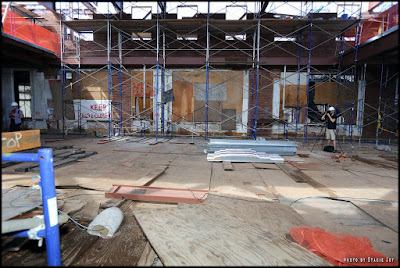 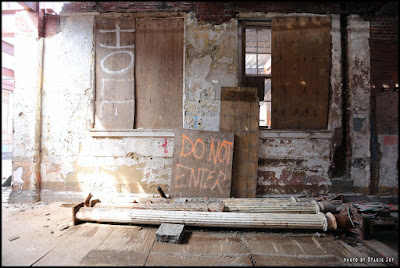 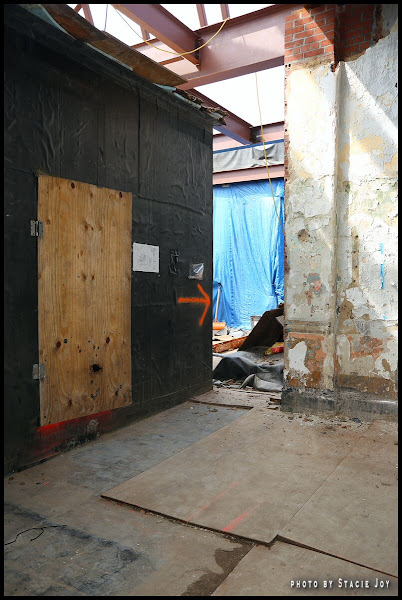 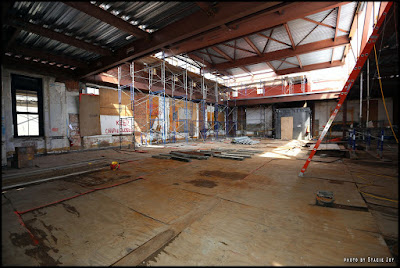 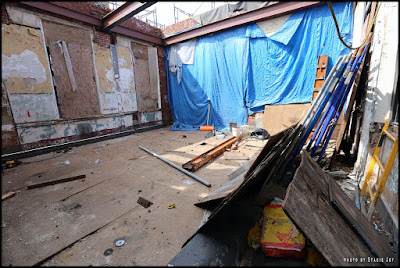 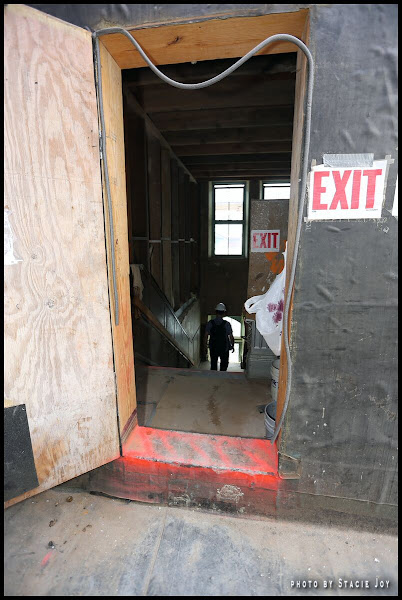 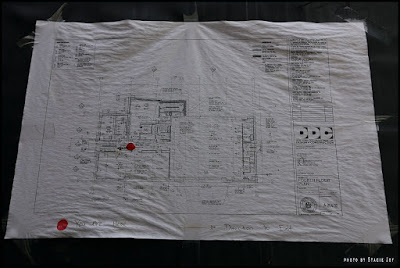 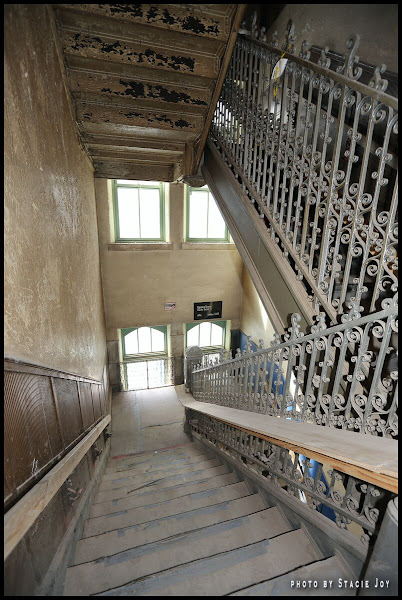 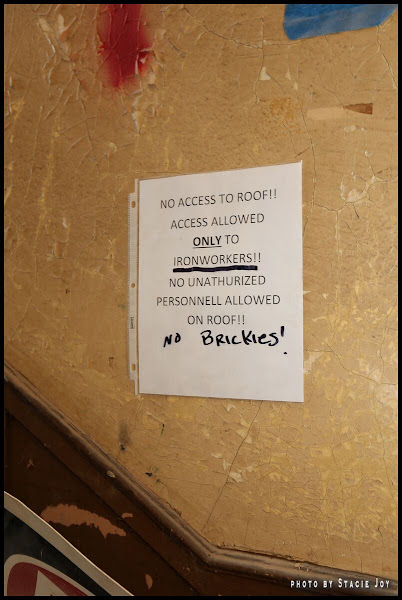 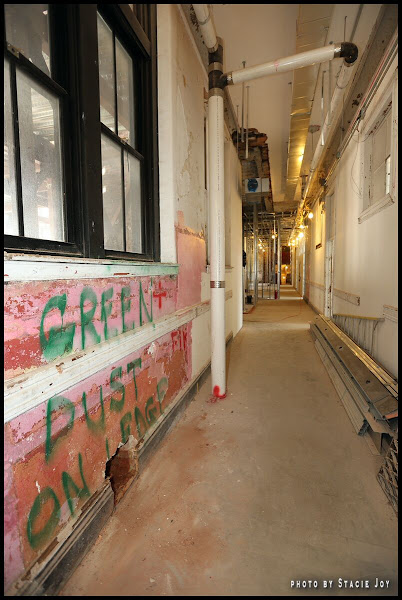 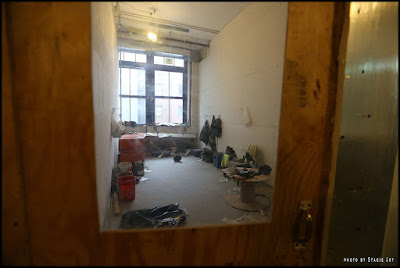 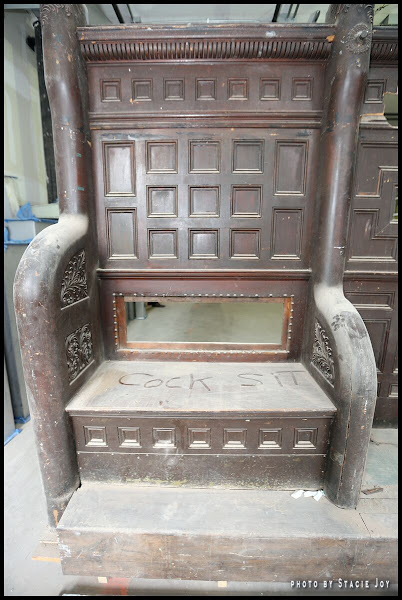 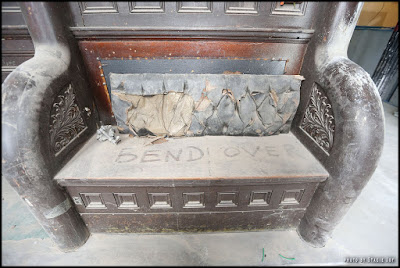 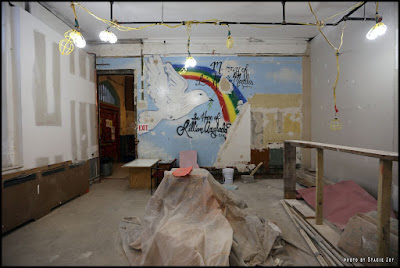 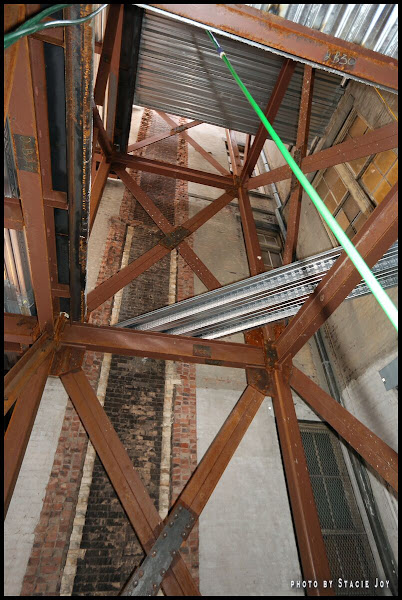 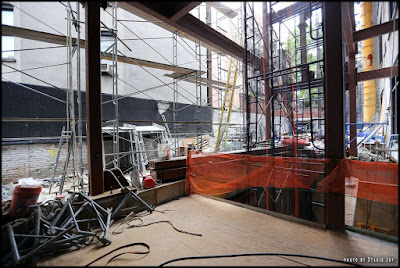 The building is slated for completion in the spring of 2016. Find more information about the renovations here.
Posted by Grieve at 5:00 AM

$35 mil Another DDC money pit paid for by taxpayers. Glad that union people living in outer boroughs can maintain their quality of life because of such City projects.

Would have been cool is artists whose work was showcased here such as Laurie Anderson could have contributed some dough to this project. Wish public space really was paid for with public money.

July 7, 2015 at 5:51 AM: You mean you wish the public space was paid for with PRIVATE money - the article is clear the City is paying for this as part of code upgrade.

It is a race to see which is finished first - this or the multiblock wrenching over at Cooper/Astor Squares.

Why can't the city take over El Bohio, which is crumbling due to inaction. It's criminal. There were so many neighborhood groups that actually used that space; and it is so badly needed further east.

If Laurie Anderson pays, it's PRIVATE money. Public Money is what comes from us taxpayers and city orgs.

There was absolutely nothing wrong with this place the way it was when it was just plain old PS 122. It was an old public school with nice details that offered ever-changing small-scale entertainment at decent prices to its audiences, and part of the charm of the productions was getting to do things like peek into old classrooms on the way or sit on the floor while you were being entertained. It will probably look like a sterile, 35 million dollar bomb shelter when it's done; such a shame.

If the City takes over El Bohio the cost of renovating that space will probably be $200 mil or more. Please no, let it be privately developed for luxury housing or NYU housing. Unpopular opinion but these supposedly public community spaces only benefit the few and are mind blowingly expensive. At least Community Gardens do not require tens or hundreds of millions of dollars to upgrade. Thank goodness youtube stepped in for the basketball court because NYC Parks will never be able to do it - witness the decline of the soccer pitch on Chrystie Street.

Thanks for the tour, EVG! I hope that all that vintage old school iron work and seating and stuff gets saved!

I always thought this building had a total redo years ago. I guess it was just exterior that time around.

As to the project this time around, I'm probably inclined to agree with Gojira.

"There was absolutely nothing wrong with this place the way it was"
-- correct, IF you believe that handicapped people do not deserve access to such places. It was not ADA compliant, and in this day-n-age that's not right.

Other points here may be correct, but if you have a problem with the money spent on this place, please, please, please have a problem when the City spends millions upon millions on developments, like WTC Towers, Hudson River Park/P53, Moynihan Station Mall, the Highline, York Studios, Harlem Studio Museum, Signature Theater, St. Ann's Warehouse, Kaufman-Astoria backlot, 42nd St. Redevelopment and endless tax breaks for luxury condo buildings.

An elevator to make this building ADA-compliant could have easily been installed without spending $35,000,000 taxpayer dollars.

@2:51, I think the highline was mostly private money, which is why it actually got done. WTC is sort of a public/private partnership, but with the city running the show. That's also why it's been 14 years and it's still not done. I can see maybe needing two, or three years tops for the cleanup of the old WTC, but it's just such a farce at this point. The Empire State Building was put up in two years in the 30s.

The city isn't competent to run a bath, much less a major renovation project. So, I think many of us will take you up on your offer of having problems with the mismanaged shit show of city-led construction.

Um, Anonymous 11:23 -
Have you checked out the Chrystie & Stanton st pitch lately?
It's been completely resurfaced.

" I think the highline was mostly private money"
I good deal is private, but you must think again. First, the City let them sell air rights. Then, the City let them create a BID, so that's local tax money. Also, they were able to establish their own concession when other parks don't get to. And that's just the start.

" With the city already kicking in nearly $1 million in taxpayer funds for the new park’s annual operations, the nonprofit group Friends of the High Line was supposed to fork over the rest of the money. Instead, the group –whose daily operations are run by politically connected officials padding their pockets with six-figure salaries — is pitching a 37-block “High Line Improvement District.”"

And also this...
" The High Line is set to get a whopping $5 million in extra cash from the city — more than almost any other park — even as it reported pulling in $85 million in private funds and established a lucrative concessions deal, city records show."

sorry, I missed this one: "It will take about $172 million to complete both sections of the park; the city has committed $130 million, and the federal government $20 million. Friends of the High Line has raised about $44 million."

I agree with Gojira - PS 122 was a totally charming space as it was. There was nothing wrong with it. Doesn't anyone care about history anymore? Those old classrooms and stairwells had bona fide EV history to them. So many artists walked up those same stairs, held the same banisters, leaned on the same walls... I always felt that there and it was part of the value of the place. It was Special. Now I'm afraid it will just be "New".