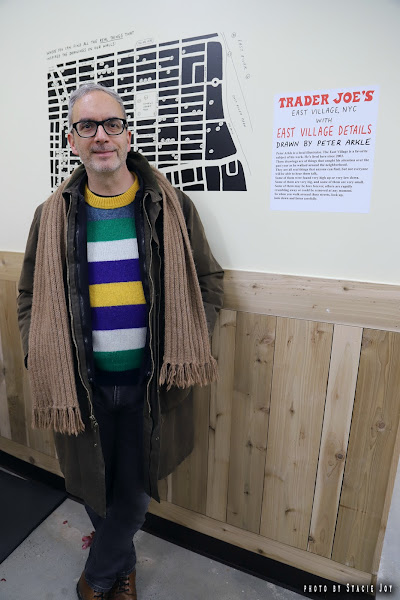 If you've been to the new East Village Trader Joe's that opened early last week, then you've likely noticed the nearly 200 drawings that adorn the store's interior at 436 E. 14th St. near Avenue A.

East Village-based illustrator Peter Arkle created the drawings, which are an appreciation of street scenes and architectural details that he has spotted throughout the neighborhood... from more celebrated sites such as the Cube on Astor Place to the lesser-known features like the water fountain/wash bowl with the bronze figures (circa 1890s) outside the Immaculate Conception Church on 14th Street. 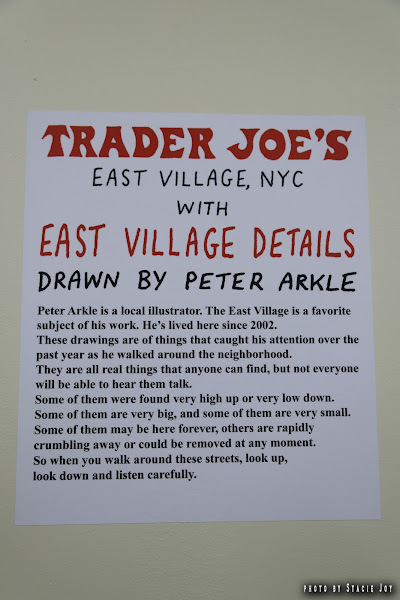 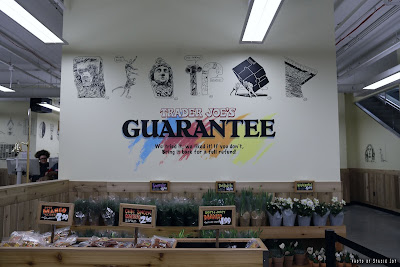 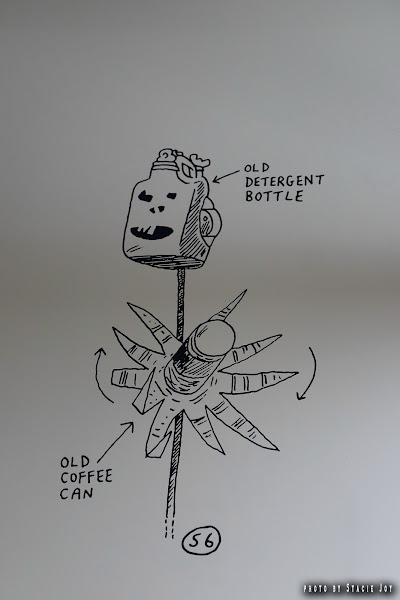 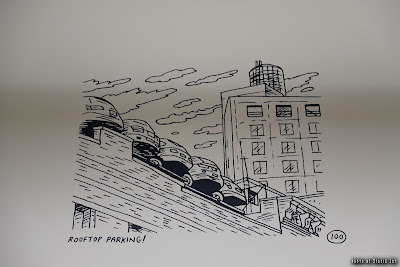 Arkle, who has lived here since 2002, met EVG contributor Stacie Joy last week to look at the work in the store — as well as a few of their real-life locations. (You can do it too if the mood strikes — there's a map in the store with corresponding locations of all the drawings.) 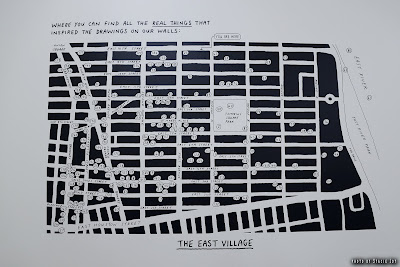 Arkle also answered a few questions about the project ...

How did the invitation to do the artwork at this location come about?

Jon Basalone, the president of Trader Joe’s, approached me at the end of 2018, saying that a new East Village store was opening and asked me if I would like to draw something for it. He knew my work from reading [my Tumblr] Peter Arkle News, which he subscribed to back in 2003.

Did you have carte blanche on the theme for the illustrations? Did Trader Joe's want something East Village related?

Jon was already very familiar with that side of my illustration work. He said I could do anything I liked as long as it had some kind of East Village theme.

Peter Arkle News contains drawings and descriptions of everyday life — things I come across on the street, the subway, in the Post Office or wherever.

How did you decide on what scenes from the East Village to depict?

I decided to walk along every street in the East Village. I started by drawing a map and as I explored each street I would mark it with a red line. It took me about two months to visit every street — walking slowly, looking carefully and trying not to freeze to death as this was during December 2018 and January 2019.

I took photos and made notes. Very quickly I realized that it would be better if I drew things that were more permanent so I focused on sculptures and other architectural details, weird pipes, parts of electrical sub stations that look like robots, etc. This way, people would be able to go out and find them.

I am very happy to have been able to draw lots of those sculpted heads — gargoyles, kings, gods, goddesses, angels and cherubs — that appear on so many East Village buildings. Many of these are crumbling away or being painted over so many times that they are turning into blobs. They need to be celebrated. Many of them are very high up on buildings and hard to see without a zoom lens — it amazes me that so much detail was added by architects in places where it could hardly be seen. Did people have better eyesight back then? 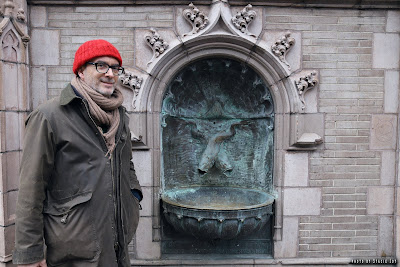 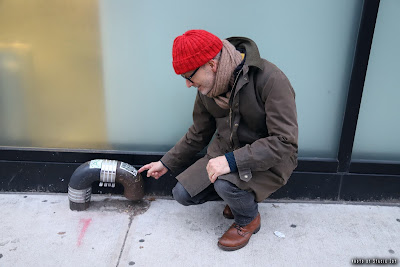 When I’d visited the whole East Village I then sat down to select which things to draw. This was not a very mysterious process — I basically chose, in most cases, the things that I would enjoy drawing the most.

By late spring, I had completed a set of 185 small ink drawings. I then scanned these and enlarged them so they could be turned into vinyl transfers to be stuck on the store walls. 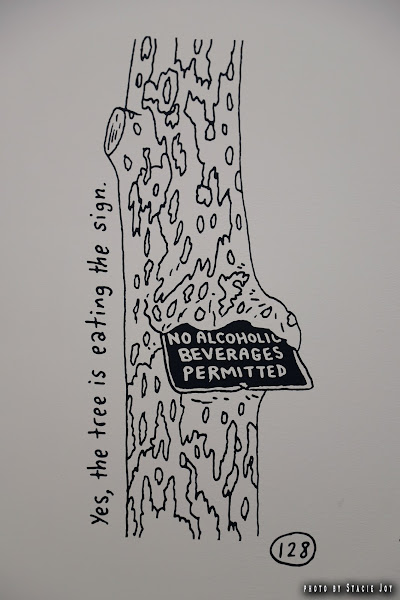 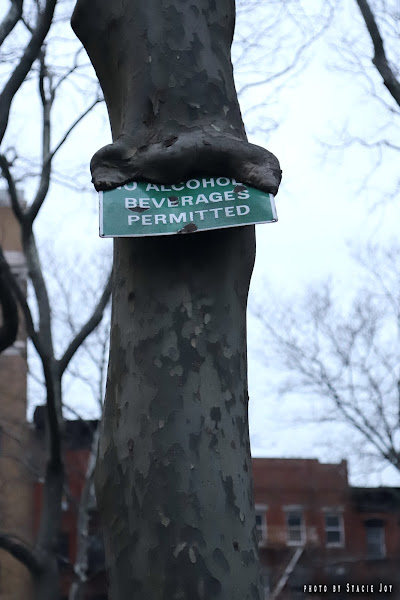 Are these permanent? Or is this a temporary exhibit in the store?

They are permanent — unless Trader Joe gets bored of them. I actually had a dream the night before the store opened that I went to visit and they had painted over all of my drawings with thick green paint because someone had complained. 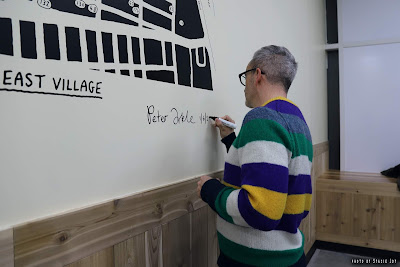 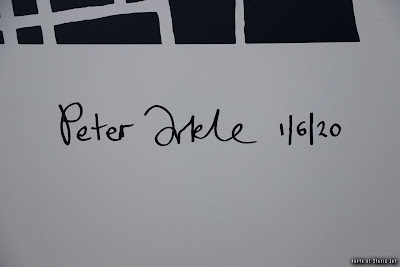 The drawings are great!

In related retail art news, the Astor Place Kmart has painted over the NYC skyline mural that was over the cash registers. Now it's just a big angry red wall. Why?!?!

The drawings are great

Unlike the Target store's shameful embrace of cultural and historical landmarks killed by gentrification TJ's was smarter and more sensitive to being part of our neighborhood than trying to "hype and sell" the way developers do. Thanks EVG for this story.

These are lovely. Kudos to Trader Joe's for supporting a local artist.

Ah so cool that they brought in a local artist for this. Love the artwork and my toddler does, too, and points out all the things he recognizes from the neighborhood.

I LOVE these and I love this initiative. Peter, please make an EV book of illustrations, it would bring me so much joy to buy it and support your art.

I was surprised and delighted to see the turtle and whale I played on as a child (and original resident) of the Village View playgrounds. Thank you, Peter!

Very thoughtful of the TJs.

Did you ever understand any of the endless changes that dumb managed place is doing?

The drawings are Pretty Cool,they give TJ's a nice touch, Thanks!