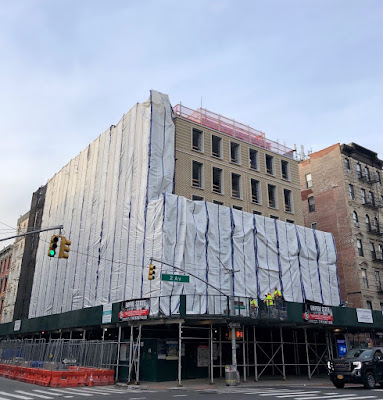 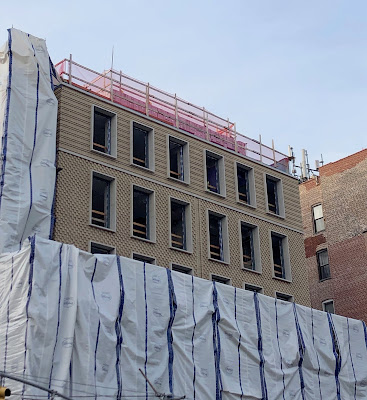 The Morris Adjmi-designed building, which will include 21 condo units as well as ground-floor retail, went up on two of the three lots destroyed during the deadly gas explosion here on March 26, 2015.

In the spring of 2017, Shaky Cohen's Nexus Building Development Group paid $9.15 million for the empty lots at No. 119 and No. 121 that landlord Maria Hrynenko owned.

Hrynenko, contractor Dilber Kukic and unlicensed plumber Jerry Ioannidis were found guilty of manslaughter, criminally negligent homicide and related offenses for their role in the blast. They were each sentenced to four to 12 years in prison. Hrynenko is out on bail as she awaits an appeal of the case.

Hrynenko, who took over ownership of the buildings after her husband Michael died in 2004, and the others rigged an illegal system to funnel gas from 119 Second Ave. to 121 Second Ave. to cut corners, according to prosecutors.

"What the defendants did, in a matter of speaking, was roll the dice with the lives of many people. The results, as we know, are catastrophic," Manhattan Supreme Court Judge Michael Obus said on Jan. 17.

As for the new building, given its location within the East Village/Lower East Side Historic District, the city’s Landmarks Preservation Commission needed to approve the plans, which they did in August 2018.

Residential units are one, two and three bedrooms. No word on pricing just yet.

The property will include a commemorative plaque that honors victims Nicholas Figueroa, 23, and Moises Locón, 27.

In October 2017, city officials unveiled new street blades that co-name the northwest corner of Second Avenue and Seventh Street after the two men. 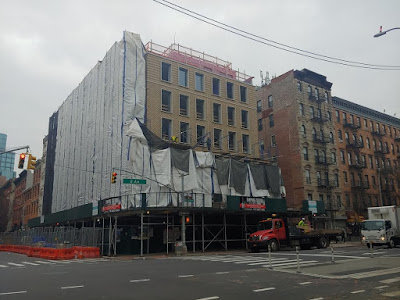 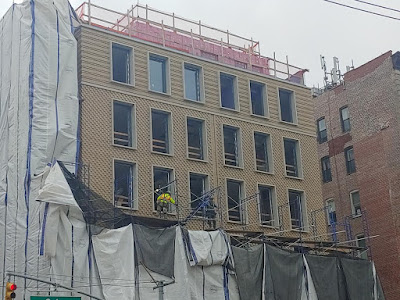 Previously on EV Grieve:
• Trio responsible for the deadly 2nd Avenue gas explosion sentenced to 4 to 12 years in prison (Jan. 17)

• Convicted gas explosion landlord Maria Hrynenko out on bail; contractor, plumber remain behind bars (Jan. 18)
Posted by Grieve at 4:55 AM

The facade doesnt look at all like the rendering, which is disappointing. It looks like pre-set stucco, and not stone. So the classic look we were all hoping for is not apparent. Instead it resembles so many other recent building, done cheaply, in our neighborhood.

Its a good name even if kind of long. "Explosion Site Condoplex".

Just repeat enough, and even the newbies will unconsciously retain the name, despite the mass market rebrand.

Boy one of those Rikers Island replacement prisons went up pretty fast.

Pretty appealing given the other travesties adorning our neighborhood. Though it’s a travesty that it’s being built at all. (Rot in jail Maria Hrynenko). Too bad the same or similar rendition is not slated for the corner of St. Marks and 3rd Ave.

Does anyone know if those rent controlled tenants who lost their apartment will be placed here, with the same conditions? Also what did happen to all the tenants?

Looking through some sample rent stabilized Leases - the Landlord may decide to tear down the building and not restore the Apartment and may terminate the Lease. If you apartment was untouched, but they still decide to tear down the building, the Landlord can terminate your Lease. It seems they are under no obligation to re-rent to the original renters. Unless laws have changed, I don't understand why the burnt out tenants did not immediately file liens against the property owner.

I think this building is very correct for the streetscape, a modern version of a tenement in scale and the color echos the building just north of it. It Is a need break from the faux industrial paned windows or the gray - purple surfaces in all the new buildings.

why do all the new buildings look like correctional facilities?