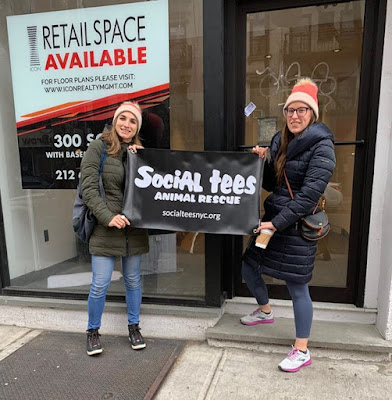 Social Tees Animal Rescue has secured a new space in the East Village — on Ninth Street just west of Avenue A.

Management of the 501c3 nonprofit animal rescue received the keys to their new home base last week.

Here's part of their message to us:

"We are so excited to make this a fun gathering spot for the community! It’s just an office so no animals will be onsite — all are in foster homes. We hope to do weekly and monthly events open to the public, and we’d love neighbors to stop in to say hi when we’re open."

No word on those office hours just yet.

They had been on the lookout for new space since moving out of their storefront on Fifth Street between First Avenue and Second Avenue this past September.

Their new office is in one of Icon Realty's storefronts along 441-445 E. Ninth St. (aka 145 Avenue A), whose newish retail tenants mostly vacated last year.

Despite the retail turnover in Icon properties, Social Tees management said that they are "are in a much safer lease now," thanks to their team of pro-bono lawyers. Social Tees was previously in a challenging situation in a space taken over by Steve Croman.
Posted by Grieve at 4:30 AM

Wonderful cause. Good for them. And welcome to our hood.

They do great work. How can they possibly afford Icon rents? Is this a publicity move by Icon? That would not be a surprise at all.

Yay! So happy they have re-landed, I was worried. And agree with @afbp, I may not like their landlord but I love them and their mission. Have adopted two beloved cats from them and look forward to more when the right time comes.

Thank you for joining this community.

They probably negotiated a reasonable rent. Since they're a smaller outfit they can do that. Office only so they won't have a lot of foot traffic. The more foot traffic or chance of foot traffic your business has, the more everyone in the city wants a cut of the action.

This is great! Welcome to the block!

Social Tees is the best. I am concerned about them signing a lease with Icon given the real estate company's reputation. But, hopefully, the lawyers looked it over, and perhaps Icon will treat them better for publicity's sake.

Happy for Social Tees. I wish them luck with their new landlord. Icon is owned by Terrance Lowenberg. He is a scumbag.

Love them, but the guy who used to manage that place was not so nice. Hopefully this new team is much nicer. Best of luck to them.