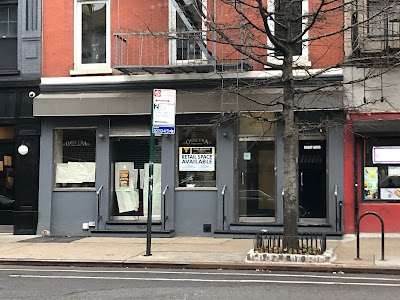 Obscura Antiques and Oddities has officially closed, and a for rent sign now hangs in the storefront at 207 Avenue A between 12th Street and 13th Street.

A variety of factors led to the closure. "Our lease is up at the end of February and we are a bit burned out," co-owner Mike Zohn told us back in November. "The business has changed as has the neighborhood, plus the expense and overhead are high."

The asking rent for the space is $4,995 — all uses considered, per the listing.

And on Avenue A at Ninth Street... a for rent notice is up at the recently shuttered Arepa Factory. The listing hasn't made it online just yet. 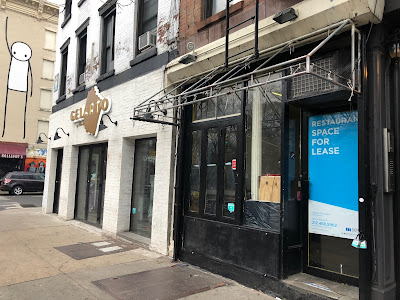 Meanwhile, the corner space — the former Gelarto — has been leased. The brokers didn't disclose who the new tenant is, however.

These spaces, overseen by two difference landlords — Icon on the corner and Steve Croman next door — were home to Cafe Pick Me Up until May 2015... 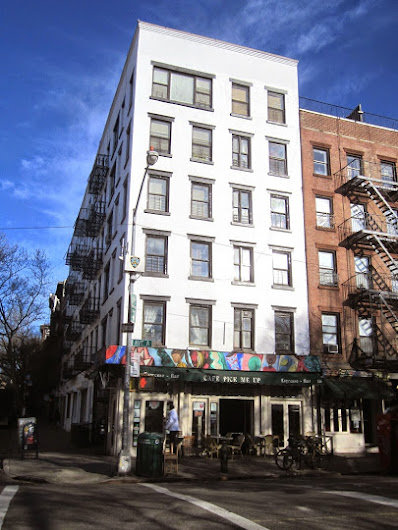 One last nearby storefront to note... Three Seat Espresso is now officially closed (as of Jan. 19) at 137 Avenue A between St. Mark's Place and Ninth Street... 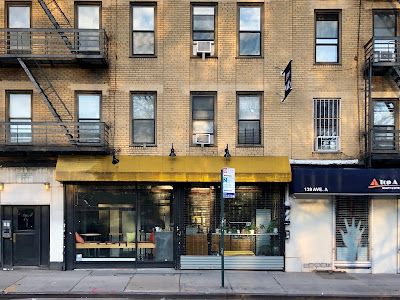 No word on what might be coming to this space.

Previously on EV Grieve:
• A visit to Obscura Antiques and Oddities, closing soon on Avenue A

• After 20-plus years in the East Village, Obscura Antiques and Oddities is closing

• Arepa Factory closes up on Avenue A

• Three Seat Espresso will close by the end of 2019 on Avenue A; founder blames Starbucks
Posted by Grieve at 4:05 AM

The Gelarto storefront looks like, and according to the building porter , it will be an ice cream shop. There are ice cream freezers and two new soft serve machines sitting within. The porter also mentioned a coffee bar will be occupying one of the stores. I am thinking the barber shop since the windows are now covered over with paper and the floor is marked up with the blue tape used for painting. And I saw someone carrying in a restaurant stainless steel compartment sink from the trunk of his car last evening . Also, what was the wine shop across the street is under construction and the windows are now covered over so looks like that has been rented

I just don’t think there are enough tourists wandering around here for another fancy ice cream shop to survive. Ray’s has all the milkshakes and soft serve you need, and Mikey Likes It has great hard ice cream with new flavors all the time. This isn’t Bleecker and Carmine with hordes of tourists wandering around with nothing to do. In spite of all the real estate industry hype, it’s neighborhood really isn’t as gentrified as they like to think it is.

Nothing says "touristhood" more than frozen treats and bakeries that are solely focused on cupcakes.
I find that I need to travel further and further away from my home to get some pretty basics everyday things now. As for that Icon building I vowed a couple of years ago to not support any business that leases a space in a "bad landlord" building.

Noble (9:14) I completely agree with you. I do not spend any money in any business who chooses Icon as their landlord and feel sorry for all the businesses closed by their greed.