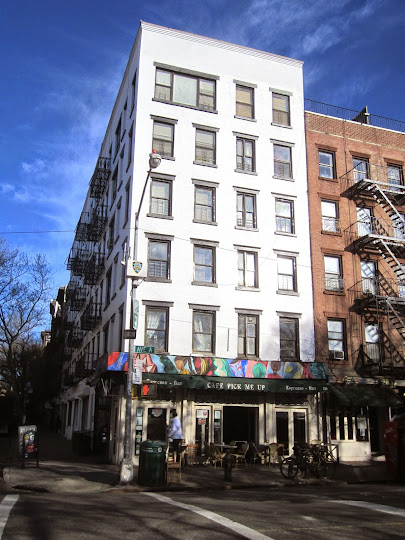 As previously reported, the 20-year-old Café Pick Me Up on Avenue A at East Ninth Street will close for good after service on Sunday.

However, they won't be going too far. Café Pick Me's Facebook page has more details on the move to East 10th Street between Avenue A and Avenue B:

It is with great regret and sadness that we have to close this location of Café Pick Me Up due to a forced closure. It has been such a beautiful experience and pleasure to serve this neighborhood and our friends for so many years.

Luckily, we are able to move our operation to GNOCCO at 337 East 10th Street. We know this won’t be able to replace the memories and location of the original Café Pick Me Up, but we think this will at least partially fill the vacuum of a chapter that lasted so many years.

CAFÉ PICK ME UP WILL OFFICIALLY CLOSE MAY 31ST AT 10PM.

The first Monday in June will begin the week-long auction of the historical content in the café (including sale of all objects, furniture, and tables).

You are all invited to the opening at GNOCCO on June 3rd with free coffee for all starting at 10AM and served till 4pm.

Thank you all for your business over the years and see you soon at GNOCCO!

PS: Stay tuned for the next venture at 147 Avenue A.

¬-The Café Pick Me Up Team

Café Pick Me Up is currently housed at 145 and 147 Avenue A, and they have two different landlords. 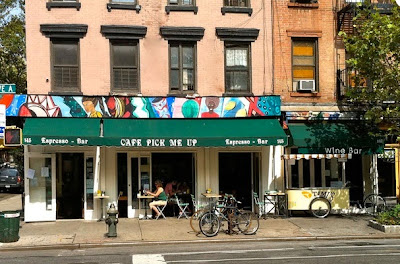 Café manager Rossella Palazzo told DNAinfo in March that a rent hike from No. 145 landlord Icon Realty is the reason for the closure. (Icon is currently listing the storefront… asking $15,000 a month for the space, which includes 600 square feet on the ground floor and 724 square feet in the basement.)

The Cafe rents the smaller storefront next door at 147 Avenue A for use as a dining room from landlord Steve Croman of 9300 Realty. From the sound of the Facebook message, Café Pick Me Up has plans for the 147 space.

[Updated] Cafe Pick Me Up expected to close for good after May 31
Posted by Grieve at 11:12 AM

Email ThisBlogThis!Share to TwitterShare to FacebookShare to Pinterest
Labels: Cafe Pick Me Up, Gnocco

Croman can suck it.

That must have been fun for the owners to learn that Croman bought 147, then 2 years later Icon buys 145! Based on their message, though, it seems like they will continue on with Croman in some form. It is amazing that any landlord could be worse than Croman. Congrats to icon

What was the name of the cafe that was on the next block south, or two blocks south? it had tv's stacked up in a tub in the bathroom? loved that place also...

Croman and Icon disrupting lives, jobs and a neighborhood like no others can. Anyone want to bet that this storefront will be anything but a bar/theme restaurant?

Damn it. No. Loved this place. Loved this location. I got so much writing done at Pick Me Up over the years. I moved out of the area but I always went back when I could. Better go over there one last time.

We need a forever 21 in the hood!
This space would be perfect!

12:09,
You may be thinking of alt.coffee, which was an early internet cafe. When it opened, some people complained about it as being a yuppie, gentrifying kind of place, since it had computers and coffee that was more expensive than bodega coffee.

this place is a joke. Never had a decent cup of coffee there. Just pass the people who can't afford internet service and want to be "seen" writing. Monkey? Ray? c'mon. service was always epically bad as well. Rent hike hurts because your business is failing. Bye.

"cafe that was on the next block south"

Yeah, probably you are thinking of alt.coffee, which, IIRC, had several iterations and at least one of them included TVs/computers/Star Wars figurines/etc. in the bathroom. I still miss it, though I ended up spending a lot more time overall in the place in the back of the green dry goods store, which is, I think, still there.

What was the name of the cafe that was on the next block south, or two blocks south? it had tv's stacked up in a tub in the bathroom? loved that place also...

Those were old computer terminals, some of them very old. Interestingly, you could see it had been a large apartment before, because it wasn't heavily renovated. I certainly spent more time at that place than at Sustainable NYC, although I admit I've bought more stuff at Sustainable.

Am I the only one whos a little confused about this Gnocco/CPMU mash-up? Any idea how this might look? I live above Gnocco and would be so sad to see them go!

It's my understanding that it will be business as usual at Gnocco in the evenings. (They're not closing or anything.) And the cafe will be open during the day... not sure how it will work on weekend mornings when Gnocco served brunch

Back in the mid to late 90s alt.coffee was owned by a couple named John and Melissa, along with another guy, who they sold out to after they went to start another more music-oriented space. The only thing they were gentrifying was the lack of internet access in the EV. They actually ran an ISP out of a little closet and they hosted some local websites. They did events with NY New Media and had lots of early Internet adopters there who helped each other build websites and do startups.

They had great coffee and live music many nights, old comfy couches, and a bathroom that still had an old bathtub which they filled with old TVs. This was before most people had wifi cards, so they used to give you an ethernet cable to hook up your laptop, or you could just use a rented mac. Eventually it turned into more of a gift shop, but it was a regular hangout on many sunny weekend mornings.

Sad to see yet another favorite cafe gone, but will definitely check out thier new location at Gnocco.

I wasn't a regular patron of this place. The silly name was a turnoff for me, but I do feel bad for them because they were shoved out of their home. I wonder what's next.

So now businesses need to have roommates