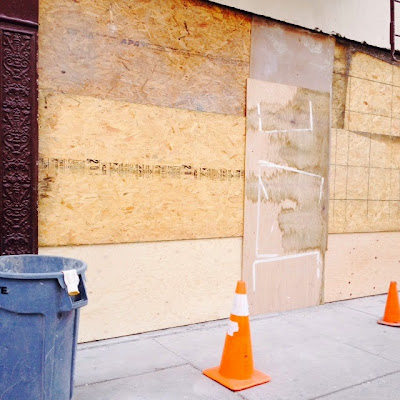 Several families who live at 444 E. 13th St. are filing a lawsuit against their landlord for "deplorable conditions" as well as for ongoing threats and harassment, according to a media advisory about the tenants' situation.

The residents and their legal and housing reps will hold a press conference this morning at 10 outside 444 E. 13th St. between Avenue A and First Avenue to discuss the lawsuit.

Here's background via the EVG inbox:

The Community Development Project (CDP) of the Urban Justice Center, in collaboration with Good Old Lower East Side (GOLES), is representing nine rent-regulated Mexican immigrant tenants of 444 E. 13th St. who are suing their landlord, Raphael Toledano, and his agents in Manhattan Housing Court. They are asking the court for an injunction against illegal harassment, the restoration of basic services, and repairs to individual apartments and common areas.

In addition to the wide range of alleged illegal harassment and discrimination practices from agents hired by the owners, tenants have gone without heat, hot water, and gas since mid-April.

Other alleged bad practices by the landlord include:
· Threats of demolishing the building;
· Threatening Mexican tenants who the owner alleges are undocumented; racist and discriminatory remarks about Latino tenants;
· Relocation pressure by agents;
· Health and safety hazards due to illegal construction and unsafe work on the gas lines.

There are currently several Stop Work Orders on the building, including for illegal renovations and unauthorized work on the gas lines, according to DOB records.

Meanwhile at 444, workers have carved out a new storefront on the ground-floor in the building. According to the listing (no longer online), the "Landlord will present as a restaurant ready space." The asking rent is $10,000 a month.

Previously on EV Grieve:
A storefront arrives on East 13th Street
Posted by Grieve at 4:40 AM

I was in my business yesterday and a well dressed women came in and asked me about the an empty section 8 building nearby. I asked her who wants to know and as I suspected she was in real-estate. I told her it was not available for purchase, then contact the city if you don't believe me. She refused to believe me (I was telling the truth) so getting pissed finally I called her a "carpet bagger". She gave me a blank stare, I asked her if she knew what that meant and she hesitated and gave me an unconvincing "yes". I told her to leave three times until she finally did. This confirms what I've thought for years, the talentless and the under educated always seek employment in real estate.

at 10 am they have a picket line around the building

I was just out there! They are mos def protesting with video cameras and they've got a good turnout too. I'd say at least 25-30 people. That's impressive for 10:30 on a weekday. Fuck these landlords.

Good for the tenants and GOLES. Toledano needs to be called to justice. If that space comes back again seeking any kind of liquor license it needs to be denied. Landlord's actions are criminal. Don't support any business that opens there.

Is this the building that has had portable boiler outside for a long time? Or was that on 11th? Been gone so long I can't remember a thing.