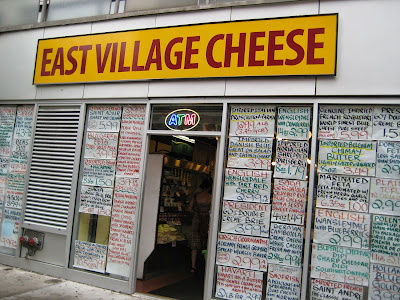 As previously reported, East Village Cheese Shop has until July 31 on its current lease at 40 Third Ave. between East Ninth Street and East 10th Street.

According to Off the Grid, the owners had considered a move to Avenue A and East 13th Street. However, that plan never materialized.

Now comes word that the shop, which has been at its current location for nearly 20 years (after starting on East Ninth Street), will move to East Seventh Street.

An EVG reader left this comment the other day on our previous East Village Cheese post: "They told me they are moving to 7th St betw 1st and 2nd."

And yesterday a reliable source told East Village Eats specifically that the shop will relocate to 76 E. Seventh St., former home of Warwick and Framus Custom Shop, which closed at the beginning of the year. 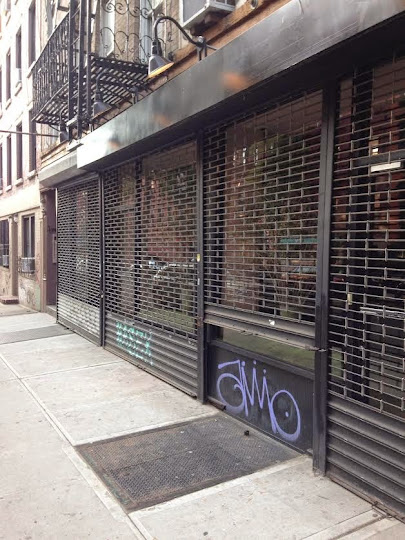 In January, we heard that the Duane Reade on Third Avenue at East 10th Street was going to expand into adjacent storefronts on that block, forcing out several businesses, including East Village Cheese Shop and Excel Custom Framing. There aren't any permits on file yet with the city to indicate any expansion/renovations here.

[Updated] Confirmed: East Village Cheese will be moving to Avenue A later this year
Posted by Grieve at 4:30 AM

That would be great. It's a good street with lots of foot traffic. I think they could do very well there.
It's on my way to and from the bar, and usually I get hungry on my way home

I hope that the move will bring a focus on the quality of the cheeses it offers. I have been a customer for many years. The slide in quality began with the previous owners. The current owners, wonderful Tibetan people, should, if they want to keep their business going (against the lure of the West Side market)must shop for a fresher stock of cheeses. The prices of cheese has risen in the last few years, and East Village Cheese has worked to keep prices reasonable. The availability of good, fresh cheese,in other venues only makes the out-of-date quality of much of their supply less appealing. I wish them well; I look forward to shopping there again. What is good about shopping here is that the cheese is cut fresh (unlike the pre-cut--how long has it been there choices one finds in other places. For EVC to rise again, it must deal in a fresher quality of its product.

I think the plan to move to 13th Street didn't materialize because it was a bad idea. Of course, it was forbidden to say that, only praise for the location was allowed. Now maybe it's possible.

Living on 12th street near Ave A I was disappointed to see the (for rent) sign go back up at the 13th street storefront. I will check them out in the new home on 7th street (if that really happens).

> The availability of good, fresh cheese

Aw, bummer. 13th and A would have been so much more convenient, and they would have gotten a lot more of my money than they will on 7th Street.

Being from 12th and A, I was really rooting for the 13th Street location, it would've been a great location for me!

This brings the cheese closer to me, so I will definitely be a more frequent customer. This is a great little block and I wish them the best.

What I meant, Anonymous 10:08, is that most of the cheeses they sell are past their prime. Yes, I know that some cheeses are aged. There is a difference between an aged cheese and a cheese that is past its prime. The previous owners, and the current owners, were / are trying to provide reasonably priced products. One of the things that has changed in NY is that people are more "sophisticated" about their food choices then they were 20 or more years ago. One need only read this blog on a regular basis to know that readers are concerned about the taste of their coffee and the quality of their bagels and cupcakes. My hope was that a new location would lead to a better quality of cheese. Anywhere you turn now cheese is expensive.

I went there this past weekend and the guy behind the counter told me the same thing. He said 7th Street and 2nd Ave will be the new location.

100% agree with everything you said!!

Isn't that Ellen Turrietta's block? What ever happened to her?

Great! I hope this is true.
That's a great block and closer to my home.

No Scuba Diver, it's not ET's block. She wanted to think it was, but she was wrong. What happened to her? She went to Brooklyn to get booted from Bushwick apartments for a change.

agreed -- they need to up their cheese game... very mediocre experience imho