[Another photo we use a lot]

On Tuesday night, as we noted, reps for Peter Brant were to meet with residents at Village View to discuss his plans for 421 E. Sixth St., the building he purchased last year for $27 million.

Posted flyers said that the owner would be present. Owner owner? Or owner as in owner of, say, the company overseeing the renovation project? 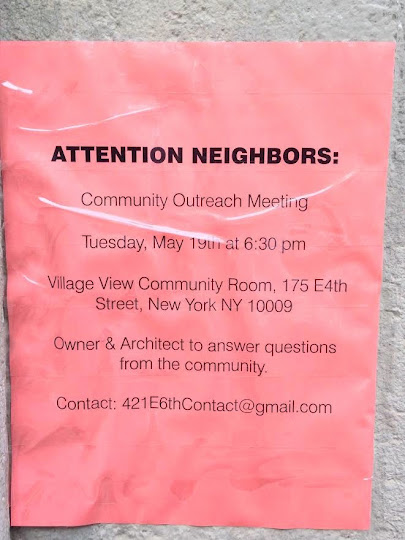 Well, according to an EVG reader who attended the meeting, "Brant was actually there. Yes. Cufflinks and all."

First, though, as previously reported, the building between Avenue A and First Avenue is intended to be a gallery space to display Brant's personal art collection. The intention is to have approximately two shows per year, with the first one scheduled for Fall 2016. 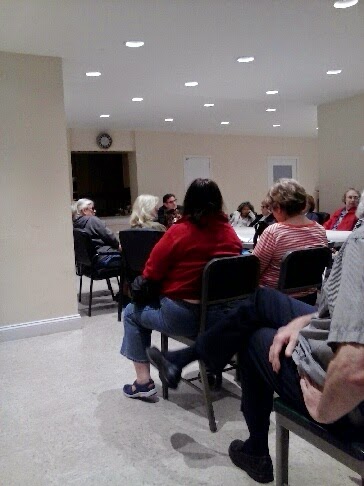 Back to Tuesday night's meeting, which the EVG reader described as intense, though Brant was "open, engaging."

Some guy asked Brant "Why don't you have your art displayed at your Polo Club?" To which Brant replied, "Because they play polo there."

Brant also said that he wasn't aware that the party on March 26 — for the world's top collectors of Dom Pérignon rosé — in the building would be what it was, that he was doing a favor for a friend. Per the reader, "He is aware how it affected the neighborhood."

He invited everybody to come to his foundation in Connecticut to see what he is all about. One woman kvetched that she couldn't get there, is anything closer? He said he has a building in Soho. Well, the guy was trying.

I'm starting to sound too much like I'm defending him.

Again, of all the things that could happen to this building, I think this seems like one of the best things. It will be a private space. Not a lot of people there. Maybe a couple of invite-only openings. I want to believe him. Basically it sounds like a garage to store some of his art.

Anyone who attended the meeting want to share his or her thoughts on Brant's plans?

He should be applauded for speaking directly to the community in the way they are accustomed too - hurling insults and jabs from the safety of a mob.

I see this whole thing this way. This building has been a private residence for what 30 plus years? Now it is still privately owned but by someone with a lot more money than the previous owner. It continue to be used as a place art is shown and as before by invitation and not open to the general public. This could have a disaster if the building was purchased by a developer, demolished, had 10 floors added to the top, become an H&M, giant sports bar, etc.. Nothing has changed here except the building will be restored not destroyed and life goes on as before.

"It will be a private space."
So, in other words, no change to this place at all as far as it concerns anybody other than the owner?

Do you really believe that Mr. Brant did not know how disruptive the Dom Perignon party would be to the neighborhood? He is a smart man. How could he have not known what was going on in his building?

So there was a party, big whoop --- they came and went. Try living in areas where there are parties every weekend on the street, in the backyards and on the roof decks. Until 4 am. Where are those bar owners, management companies and landlords? Asleep in their own beds and not speaking to the neighborhood. Give the guy a break. He at least came out to meet the faex populi.

Just in case you still have any illusions about who Peter 'Do You Know Who I Am?" Brant really is, this happened at Tribeca Ball last month. Billionaires: You can't dress them up and you can't take them out. via NY Daily News:
Billionaire Peter Brant is guest of honor, but gets stopped by guard.

Well, that’s a funny way to honor a fella. Billionaire Peter Brant was guest of honor at the Tribeca Ball at the New York Academy of Art, but that didn’t impress a diligent security guard who wouldn’t let him enter the dining room ahead of hundreds of regular guests.

“They had to fight through 150 people to get to the front of the line, then he got into the lobby and they wouldn’t let him get to his table,” said one stunned witness. “His beautiful wife (Stephanie Seymour) was getting pressed up against by the crowd, everyone kept trying to take his picture and ask him questions,” said our spy.

“He said, ‘I’m Peter Brant — I’m being honored tonight!” according to our insider. “But the guard said, ‘I don’t care,’ and made him wait with everyone else for three to four minutes. He stamped his foot. He ranted and raved. He was not happy,” we're told. Finally, once the dining room was ready, Brant braved the stampede en route to his VIP table. “I felt bad for him actually,” said our insider. “This is a man used to getting his way.” Once inside, Brant found himself surrounded by the likes of John Varvatos, Calvin Klein and Mary-Kate Olsen.

So? That was pretty dumb and annoying of the guard. If you are the guest of honor at an event, billionaire or bum, it's pretty inexcusable for the event staff to have no idea who you are. It's just an outright failure on their part, and to remark that "I don't care" is rude and unprofessional. Under what sane definition is that security guard "diligent?"

I will, however, ding Brant for being naive. He should have known that trying to reach out to the community would only be rewarded with bitterness, character assassination and suspicion, doubly so because he is successful. I note that if he were a heroin addict that never held a real job and occasionally played guitar in a shit bar in the 90s instead of a guy that employs thousands of people that people here would likely be tripping all over themselves to say what a great guy he is.

"Do you really believe that Mr. Brant did not know how disruptive the Dom Perignon party would be to the neighborhood? " the brand (Dom Perignon" says it all - a swanky event that y'alll weren't invited to it goes without saying. and as soon as the Dom ran dry, party was over. how could a bunch of UES wankers masquerading as EV wankers calling the event disruptive? and disruptive compared to what, a teetotaler's tea party?

We haven't heard much about the clueless Brants lately. Now Junior has been arrested at JFK for Assualting a cop in a drunken rage. This acorn did not fall far from the tree.

Peter Brant Jr., 22, of Greenwich, Conn., was charged Thursday night with felony assault on a Port Authority cop after JetBlue told him he was too drunk to board his 5 p.m. flight to West Palm Beach, Fla..

“I only had three drinks,” Brant insisted, according to Queens prosecutors.

But don't worry, according to the NY Post. "Brant, who was released on $5,000 bail, headed straight to Indochine and Top of the Standard, where he was seen drinking."

The Brant's are back in the news. Last week Peter Brant Jr. was arrested at JFK for acting like a drunken idiot and assaulting a cop. Now Junior's mother Stephanie Seymour is in trouble for drunk driving: NY Post: Peter Brant's wife Stephanie Seymour gets sentenced to AA meetings for DUI.

And you wonder why we have so many drunks in the EV? The acorn does not fall far from the tree,