A new fence for the 2nd Avenue blast site; tributes to victims will remain 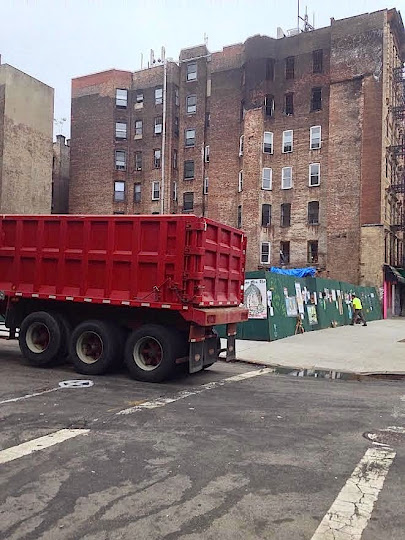 A few readers wondered what would become of the plywood fencing with photos and tributes to Moises Ismael Locón Yac and Nicholas Figueroa, the two men who died at 121 Second Ave. on March 26. 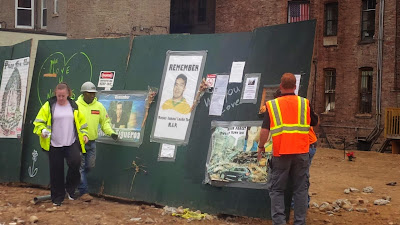 According to one of the workers, the plywood will remain at the site behind the new fence… 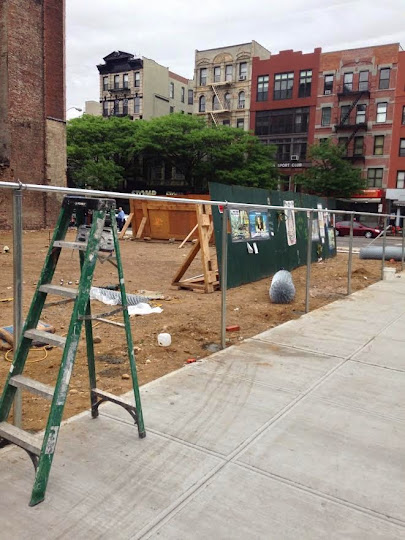 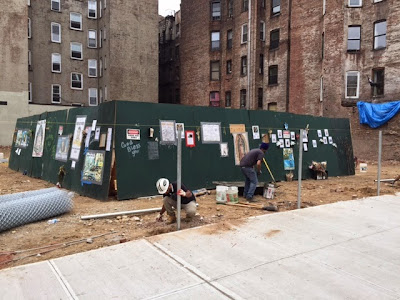 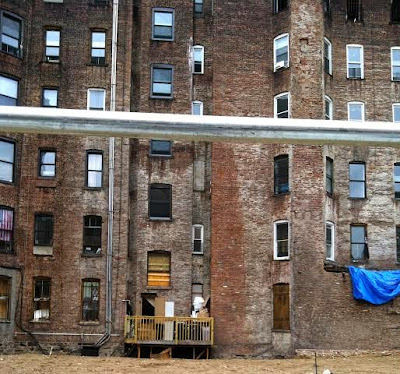 Thanks to EVG readers Jose Garcia, Steven and Blue Glass for the photos 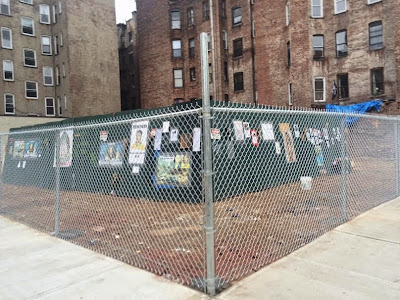 There's been talk of moving to prevent developers from swooping in and also to prevent the banks and guilty slumlords from profiting from the now empty space. We need reflecting pools and a memorial park at this space.

What happened here is a monstrous tragedy. And those of us who live around it will always be sad at and horrified, by what happened. However, The coverage is now bordering on necrophilia. It is time to move on, and focus on what will replace these buildings.

What did Larry David say in an episode of "Curb Your Enthusiasm”?

“The ‘sorry window’ is closed.”

BTW, he was playing an asshole.

Everyone, 7:19 has decided it is time for us all to move on! I'm guessing 7:19 did not lose a loved one or a pet or an apt full of memories in the explosion. It's fine if you don't feel anything 7:19, but don't rush others who do. You're in a big hurry for a building there? Why?

The site will become either an NYU dorm, market-rate-condos or affordable housing depending on which bidders prevail.Maria Hrynenko, if proved to have caused the destruction here by her orders to divert the gas as *appears* to be the case, should and will be sued for damages by the families of the two dead men, the business owners who lost goods and livelihoods, , their employees, all tenants of all affected buildings, and the city for restitution of wages paid out for weeks to fire and police personnel up to the exact dollar of her total worth once she has divested her other real estate holdings and will or should be forbidden to ever again act as a landlord.

Maybe Amanda Burden-Christ will make it another one of her famous boondoggle cement fields. Or as she calls them, progress!

What a lot of vicious mean spirited commments. Is this who we are? Is this representative of the East Village?
Moving the pop-up memorial was inevitable and at least it was done in a respectful manner for the moment. What else could be done? The land will revert to the city or be bought under new management. Empty spaces are destined to be filled. It would be nice if Community Board 3 took an active stance here and made sure that we end up getting is in tune with the neighborhood both culturally and aesthetically.

"What a lot of vicious mean spirited commments. Is this who we are? Is this representative of the East Village?"

No. It's a vocal minority of people who don't leave their apartments and troll from site to site all day long.

Just went by and then fence is open. Like someone broke in - not like unlocked. Hmmm. It's a pretty shoddy fence.

It was Amanda Burden-Christ casing the joint!

@1:13pm: You are such an optimist to think that CB3 would have any actual positive effect on the outcome.

PS: I'm AFRAID of getting "what would be in tune with the neighborhood," given what the neighborhood has become at this point. We'll end up with banks, bars, and glass frat-house woo-woo rentals.

What we've lost (and keep losing) are stable long-term residents who are an asset to this community.

Hrynenko owned only one of the three properties, right?

why would the owners of the other two properties be forced to do anything other than what they want with their land?

So, three building sites need to be a permanent tomb and memorial for two people? Tragic as two young deaths may be, that's just nuts. By that logic, almost every street corner or stretch of road needs to be cordoned off and turned into memorials, and let's not even get into what would need to be done with the bridges.

@DrScientist: You are onto something here: 2 of the 3 properties --119 and 121 2nd Ave. -- belonged to Maria Hyrnenko, the third (123 2nd Ave) which housed Pomme Frites was owned by George Pasternak. Whatever is built here will need approval from the City, DOB and Community Board input just like any other new structure.

But there are 2 different owners involved, and only one of them and her son are facing years of legal issues, which will probably affect whatever future plans Pasternak has for his property. People who are lumping his property in with Hyrnenko's are either uninformed or not concerned that another property owner who was also affected by this disaster should not be penalized any further.

The plywood should stay up permanently.