This evening in photo opps on St. Mark's Place 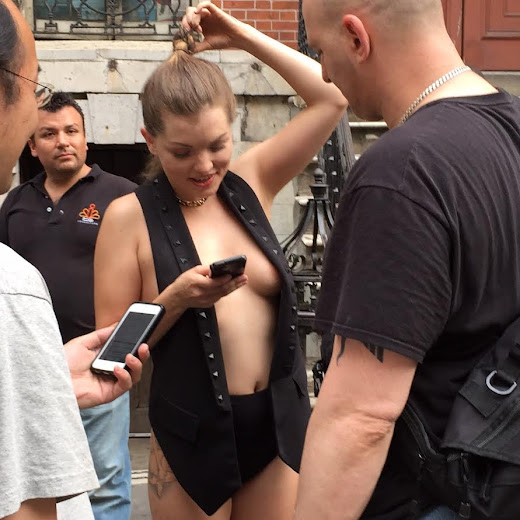 A reader sent us some photos from 20 St. Mark's Place this evening around 6-ish … where some kind of photo shoot was taking place on the steps in front of Sounds…

I think it must be a photo shoot but the only ones taking pics are the bystanders. Soon she is completely topless and posing. After a few minutes she comes down to street level and shoots the shit with some people who had been watching. Takes some pics with people. Then a dude with a wheeled duffel bag says, "OK we gotta go," and without really covering up, she leaves with this guy. I have no idea what the hell was going on. 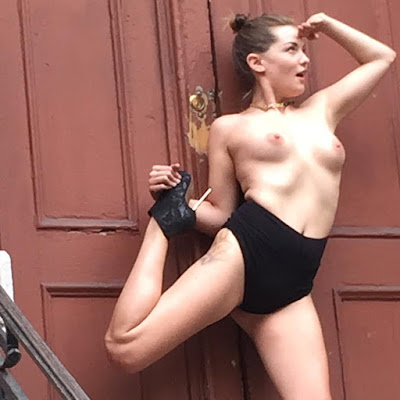 Cute girl, but the granny panties were not a good choice!

lol this is awesome

More "I'm gonna be a star (or simply generate clicks/views) on youtube" stuff, with the guy filming the crowd from a distance. That's my bet.

The shitty pose makes me think this wasn't a professional shooting.

Maybe she was rehearsing for Go Topless Day.

7:57, you should have heard a young woman i was on the bus with this morning as she spoke with her friend (rather loudly); discussing a selfie she took of herself walking, she asked in earnest "do you think my audience will like this?"

this is how young people are conditioned to view themselves now in this country. it's bad enough we all think we're temporarily displaced millionaires, now we're all celebrities in waiting as well.

The GPs is what makes the look cool!

I vote for celebrating someone doing something unexpected.
Hurray!

Our American society is a repressed, hypocritical culture. One on hand, our country spends more on the military and warfare than any other place on the planet. We silently glorify violence, encouraging others to resolve their problems through heinous acts of carnage; even on television, a majority of programming contains extreme amounts of gratuitous crime and violence. It is accessible at any given time of day. You can see people blown up, stabbed, beheaded, gutted, murdered, tortured, and everything in between. America encourages this. Yet, when the image of a naked adult hits the screen, god forbid, its receives an R or Mature rating. ? Why is this? Nudity is natural. This woman isn't hurting anyone. She isn't engaged in a sexual act, yet it seems people take great offense of the female form. Don't get me started on the seeing a naked male on television. That would cause such a ruckus. God forbid if anyone happens to see a penis, that would imply the end of the world. Europe is far more progressive in this matter. In Germany, Sweden, Denmark, and so forth, you can sunbathe nude in a public park and no one turns a head. You can watch the television and see naked people in the day. I digress.

From what I see here it was sort of a commando shoot, the idea and the non-fashion shoot reminds me of something that would have happened a couple decades ago. Then again, it looks like something that could've been done for Vice.

I walked past this on my way home from work. I really don't care that she was posing nude. What was gross was how all the men surrounding her behaved. If nudity shouldn't be a big deal, then why do we continue to treat female nudity like it's something we need to stop and take pictures of?

The issue isn't nudity. It is the objectification that is the issue. That "somehow" it is only attractive young women who seem to be nude - in media or on this street - typically for the benefit of a heterosexual male audience....

Why not equal opportunity nudity? Nude men? Or nude adults of all shapes and sizes?

Something to know about photography is that every subject is objectified. It's the nature of the medium.

Also, there are plenty of other times unattractive people, men and women alike, are nude in public. Sometimes their pictures are taken, but most times they're not, just like people take more pictures of flowers than weeds.