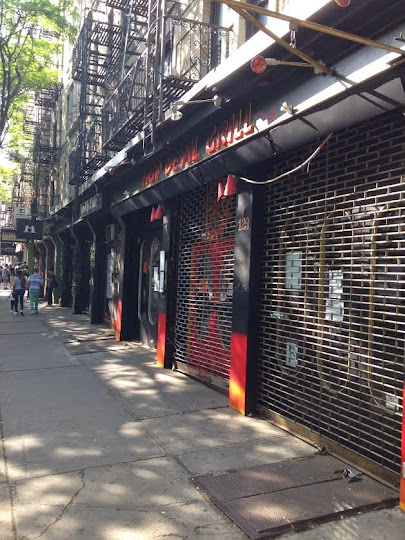 In early April, the State of New York seized sister bars the Belgian Room and Hop Devil Grill on St. Mark's Place near Avenue A.

The bars will not be reopening. There's now a sign up on Hop Devil's front door, noting a Tax Compliance Agent's Sale on Thursday morning here at 125 St. Mark's Place… 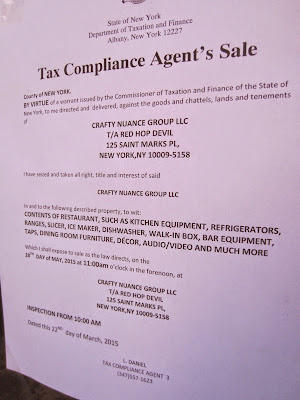 There is not a sign up at the Belgian Room. (There is a flyer up next door at the former Ton-Up Cafe, the space that separates Hop Devil and the Belgian Room. Ton-Up has been on the market since the fall. Likely just some overzealous sign hanging on behalf of the State.)

Meanwhile, there still isn't any sign of life a storefront away at the Luca Bar. A Marshal's notice appeared on the door at 119 St. Mark's Place in late April. 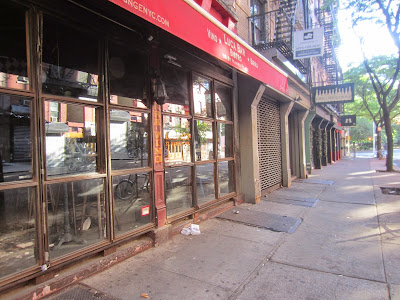 Looking in, it appears that part of Luca's ceiling came down… 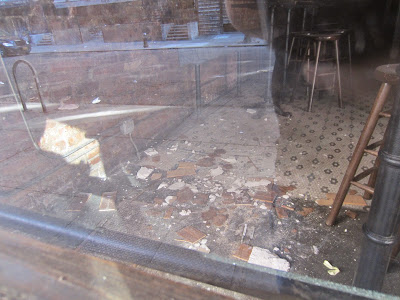 … and there's some mail too… 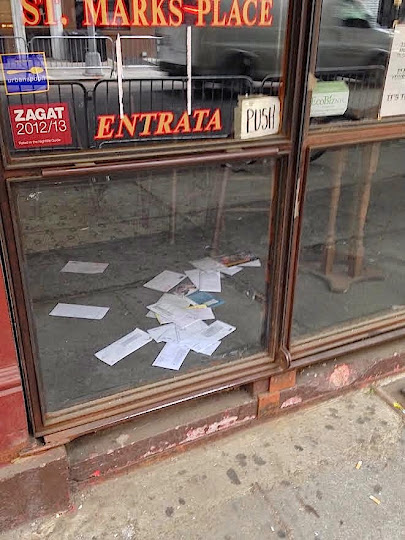 So that's four spaces among five storefronts here on the north side of St. Mark's primed for new businesses …

Previously on EV Grieve:
The Belgian Room and Hop Devil Grill closed for nonpayment of taxes

The Marshal seizes Luca Bar (again) on St. Mark's Place
Posted by Grieve at 4:50 AM

This means more sports bars and themed spring break restaurants to open soon. I wonder if the newbies who rent studios for $3000 per month enjoy all the noise, fights and body waste outside their apartment buildings, I can tell you the old timers sure as hell don't.

He or she who signs lease must pay the rent. [Some version of that from the first version of The Producers]. That's the law. Why is it that when something like this happens, posters to this blog never are willing to admit that perhaps the people who ran the business didn't have a good business plan in place--perhaps cut everything to the bone so that no emergency was covered. Yes, rents are outrageous, but given that fact, and given that they will never be rolled back to the glory days that some of us remember (I've been in the East Village since 1964, people who open a restaurant or a small business today can't do it on their best intentions or that (they are part of the neighborhood so they should succeed). You need to take the rent, the taxes, the insurance, the utilities, etc etc into account. A bright smile, a winning personality, etc etc is not enough. It takes hard word and economic savvy.

Hop Devil was the most generic of generic sports bars. There was no reason to go there unless you like to sit alone and be assaulted by deafening hip hop.

Have you ever been in Hop Devil? It's amazing thy stayed open as long as they did. The people "running" that place were insane. One of the "managers" would regular be smoking weed on the door step of my apt. Agree that taxes and nyc rents are harsh, but if you want to be in the game, you have to play by their rules.

The first and last thing I've ever had at Hop Devil Grill were the Two Dollar Taco Tuesdays. Maybe my expectations were too high having grown up to Mexicali (Northern and Southern California), but they kind of sucked. And the space was huge for serving $2 tacos... and I could sense that it was bleeding money, especially when you look at Ten Degrees, which is always packed while Hope Devil Grill was not.

I ate at Hop Devil Grill once. Only once.

Charlie- its not Mexicali- its Mexifornia.

Here's hoping some other bars go down the same path. I would even welcome a 7 Eleven or Walgreens!

I would welcome Acai Hoof! All the nutrition of a vitamin packed acia bowl served in the convenience of a hoof!

We need a froyofornia place! They have one of those at the wharf in SF and we need one here!

Now you're talking. I loved that place.

When your business isn't doing very well, it's tempting to not pay your taxes and use the bank of New York State or the bank of the US Treasury to get you over those "temporary" cash flow shortfalls. the easiest places to drum up some extra cash are by not paying your sales taxes (probably due monthly for businesses like these) or employee withholding. The only problem is that these situations seem to get worse over time, not better, an presto! you are in the hole to NYS for thousands of dollars on unpaid sales taxes. Usually, the government will try to work out payment plans if the business is viable, since shutting the business down and selling off the equipment and fixtures generates very little cash.

Since the notice is from the NYS Tax Commisioner, my guess is that they havent paid their sales tax in a while. The rest of us tax payers can pony up the amount that isnt recovered.