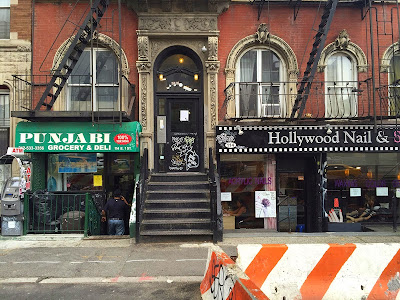 Some tenants of 114 E. First St. launched an online forum documenting problems in their building between Avenue A and First Avenue back in July 2008.

Now nearly seven years and several management companies later, the situation seems even worse… and tenants revived the forum this past Friday.

The latest issue? Bed bugs. (And rats, if you want to see in this video.)

Broken windows, broken doors, cracked walls, pealing paint, hallways covered by layers of decomposing linoleum covered with coagulated filth, rats, stench of decay, overworked maintenance crew, and now the bed bug infestation that the management company is trying to hide from the tenants not yet affected.

In order to rent both store fronts the landlord moved the garbage area from the front of the building to the fire egress platform leading to the basement. This produces a garbage accumulation on the fire egress often blocking the way to the basement and inviting all sort of vermin. It also produces a major strain on the maintenance people who have to haul the trash to the front of the building for collection. Often the trash gets spilled in the process and the hallway reeks with decaying refuse. Not to mention the garbage from emptied apartments dangerously stored, in contempt of fire regulations, underneath the ground level staircase.

According to one tenant, residents have not heard a word from landlord Birchwood Properties LLC, who took over the building in 2011.

However, there is work being done in the building. Workers removed the contents of a bedbug-infestated apartment … and placed the remains in the ground-floor hallway for several weeks, as a forum post shows … 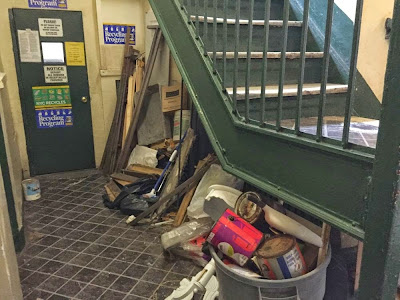 … only to move the debris to another vacant apartment … 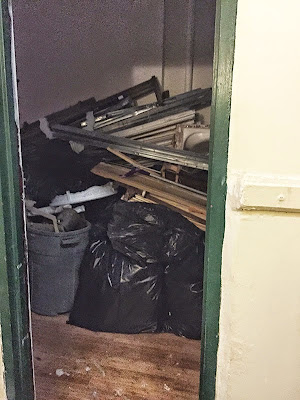 Per a resident, "No surprise that the bugs spread."

All photos via 114 East 1st Street Tenants Forum
Posted by Grieve at 4:40 AM

What surprises me in this informative post is that no where are the words "Rent Strike" used. Is the idea of withholding rent and putting it into an escrow account no longer legal?

some folks need help to organize a rent strike.
among other things there can be fears about the money being safe. or having time to go to court, and what to do and say there there.
and fear, there is usually fear.

I can only assume the tenants have contacted the city numerous times and the city has done nothing?

Can the tenants send a link to this post to the mayor's office? I wish there was someone from the city reading this blog and taking action.

I live in this building and the conditions have just gotten worse and worse. I'm staying out as much as I can. What can we do to protect ourselves? How can we make this issue known to the city?

Several of these people are middle class. The mayor's office will only help if they were poor or very wealthy. And you have to be the right kind of poor (see: Stuyvesant High).

Why are people still paying rent? Agree with Anonymous #1. Put rent in an escrow account and don't give a dime of it to the management company. Money talks.

11:00 am - you got some actual examples or are you just blowing out neocon bs

Did anybody call or visit the local firehouse to ask about this?

They even have a "Fire Prevention Complaint Form" online:

And here is the relevant text describing just what is wrong with what is going on in this building:

FC1027.4.1 prohibits storage of combustible materials or combustible waste in corridors except as authorized by the Fire Code or Fire Department rule. This requirement is intended to minimize the potential fire load and eliminate tripping hazards and other impediments to access that might hinder or prevent egress from the building.

Gross. That looks just like NYU move out day at StuyTown

Wow the incompetence here is actually staggering. A bunch of thoughts immediately came to mind...

My building maintains the same practice of storing trash on or near the fire egress out back - and yet the individuals who have to drag it from there through the first floor hallway to the front of the building somehow manage to not completely destroy or make a disaster of the first floor. This seems like the kind of thing that probably requires minimal effort to rectify, and the people responsible for making the mess are probably willfully not not putting in said minimal effort, which is disgraceful.

However, not even marginally as disgraceful as moving bed bug infested materials from one part of the building to another. I almost feel like you've also got to be willfully ignorant to think that's an okay thing to do in the year 2015. The people responsible for doing this are either intentionally or unintentionally sabotaging the entire building, and are only making matters worse by failing to inform the tenants of the infestation. Trying to cover up a bed bug infestation is the most surefire way to ensure that it will spread, well, aside from literally physically spreading it which they've already clearly got covered. Failing to inform tenants of an infestation violates NYC housing law - and failing to adequately bring in exterminators does as well.
**This needs to be repeatedly reported to 311, so at the very least the situation is officially legally documented and on file with the city.**

Regarding withholding rent - I've been in this exact situation before (3 years ago) and unfortunately I don't have any optimism to spread. I ended up having to pay back payments of rent we legally withheld, because in the end the landlord sued us for the money, even though they were woefully responsible for bed bug, mice, and roach infestations throughout the building and would have lost the case had we gone to court. We didn't end up going to court because we would have had to have paid legal fees that were either equivalent or exceeded the amount of rent we "owed," and the landlord didn't care that he'd lose in court because all of this money was a negligible sum to him. The system, as we know, is very, very badly broken. I was also afraid of being "blacklisted" as a renter in Manhattan.

Something that might be helpful though is if the tenants aware of the bed bug infestation make their own signs and hang them up in the hallway to inform not yet affected tenants of the situation. That usually lights a fire under management's ass and spreads overall public awareness of the situation going on with this building. Have the signs clearly state that everything the management company/landlord is doing (and not doing) is highly illegal.

Neocon? Criticizing the mayor for being in the pocket of the rich is a "neocon" position? That's a really good call on your part (*fart noise*). Don't use words that you don't understand (or dog whistles that you want others to forget).

DiBlasio isn't Bloomberg or Rudy, but his housing policy will do exactly zero for middle class NYers. That's kind of the point.

I would suggest the tenants contact the CB office etc. Where is Rosie when we need her?

I found that an HP Action is much more effective and easier to do then a rent strike. You can do it yourself for $35-$45 dollars. You go to Housing Court and get a bunch of forms. You have every resident complete a form with their complaints, you then document the common area issues. you bring the forms back to Housing Court signed by everyone. You pay the fee and get an order to show cause, then you ask for an HPD inspection and court schedules a date for HPD to come and inspect. This is where it can get tricky because everyone needs to be home or you need to work together to make sure HPD gets in to each apartment. In my building we had 4 of us where able to take a day off or work from home etc. So we each took a neighbors set of keys and let HPD in when they came. Once that is done the Court puts you on the calendar and at least one of the tenants needs to show. There is an HPD lawyer present who acts as your lawyer and tells the judge that they need to issue a warrant for the repairs. The landlord's attorneys can then try and negotiate how long it takes to make the repairs, but this stuff sounds serious so they will likely have to cure most of them in 30 days. The judge issues an order for them to make the repairs. Then the landlord needs to schedule the repairs. While it does take a bit of legwork it isn't really difficult, no lawyer needs to be hired, no rent needs to be escrowed, and repairs have to be made. Each time the landlord doesn't follow the judge's order, the judge get's pissed and fines them so . . . here is the info

Watch the video and then do it!!

Take some photos and video and send it to all of the local news stations. One of them might be interested in doing a story on the situation. It is worth a try.

People.
1. Call 311 or go online and make as many complaints as necessary via 311. They'll reroute you to HPD and/or DOB accordingly for each complaint.
2. Immediately after you complete #1, march yourself (better yet collectively as a tenant organization) down to 111 Center Street and file an HP Action against the landlord
http://nycourts.gov/courts/nyc/housing/startinghp.shtml

Contact metcouncilonhousing.org, they are extremely helpful and have a tenant's rights telephone hotline.
DHCR is another online resource for residential tenant's rights. This situation sounds as if the tenants in the building should form a tenants organization and file a case against the landlord for harassment.
Save every scrap of paper and document everything.

Contact Grimble and LoGiudice; this sounds like a case they may take on. (We were "partial pro bono," meaning we did pay our share of court costs.)

They helped about a third of the tenants in our building in an H.P. proceeding—most were either unwilling or unaware we were getting legal help, although we reached out to as many tenants as we could—and your building sounds like it's in worse condition.

Agree with Anon at 4:09am. I think each local news has a "7 on your side" kind of thing. Media shaming can only help in a situation like this.

I have lived in this building for 25 years. It used to be ok but went downhill with the past two owners, and precipitously so with Birchwood Properties. The problems we face are myriad. Unifying the building is nearly impossible as there are many transient young student types who don't want to get involved. They would rather just skip out on their lease if the problems escalate. The maintenance company, Verson, gets little support from the owner, Robert Spitalneck, a real scumbag who would seems bent on sucking every bit of cash out of it before selling when the air space value of every building in the LOE reaches even more obscene levels.

I am looking to move into this building. Does anyone know the status of these problems? Has management improved?