[Updated] Avenue A is getting part of its sidewalk back 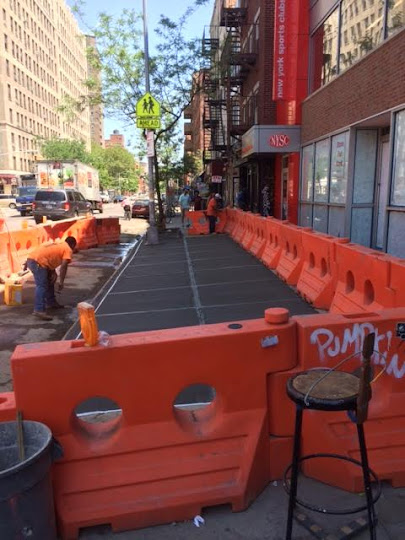 City Crews look as if they're finally finishing up their work outside 28 Avenue A between East Third Street and East Second Street, as this photo by EVG reader Carl Bentsen shows. (Apparently workers needed to remove an abandoned oil tank beneath the sidewalk outside New York Sports Club, per the club's GM.)

The orange barricades have been blocking much of this sidewalk in recent months, prompting at least one person to write signs asking for the return of this part of Avenue A.

A reader noted that the sidewalk is open … and Manny seems to be fully restocked. 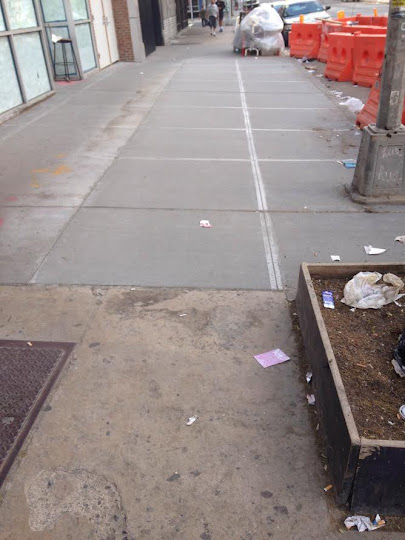 Email ThisBlogThis!Share to TwitterShare to FacebookShare to Pinterest
Labels: 28 Avenue A, Avenue A, sidewalks

Those plastic barriers make it really difficult for me to scratch my name into the wet cement!

We are supposed to believe this work was completed today because it was scheduled, and not because they were called-out online?

Why did it take so long to do this? I was surprised that the city didn't come down on this. The owner of MaryO's told me it was a private construction crew that did the work, the same one that renovated the building before the NY Sports Club moved into it.

Yeah,the timing on this does seem a little suspect.

If people here had any shame they'd realize how wrong they were blaming NYSC, but they don't.

Damit. I wish they wouldn't pitch the sidewalks so steeply. Makes it really hard to walk in my 7" Jimmy Choos while using my walker.

Man! and on a Friday too.

Maybe they did this the right way.... A much quicker way to do this would've been to pretend they never found the tank and pour concrete over it. The myriad of city agencies involved in a permit (DOB, FDNY, DOT, DEC) for removing a tank is probably the real reason it took so damn long!

The city agencies are all crookeaucracies. They should all be abolished lock, stock and both barrels.

The word "city" has a strikethrough, was this purely a NYSC project?