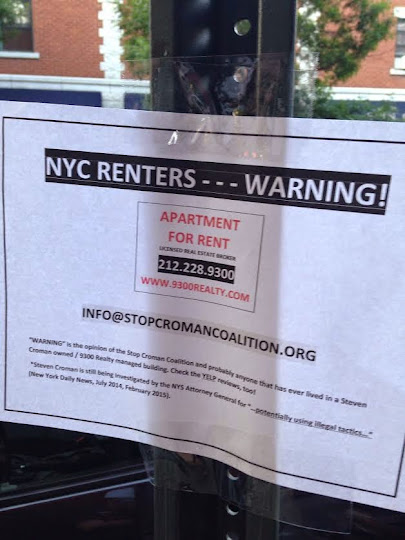 An EVG reader noted a lone flyer warning potential residents of living in a property owned by Steve Croman, aka 9300 Realty, named one of the top-10 worst landlords in NYC last year by The Village Voice.

The reader spotted this on East 11th Street near Avenue B… 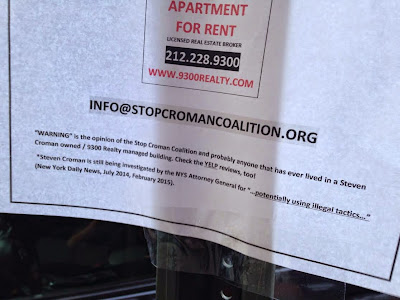 The reader noted another flyer posted nearby. (Anyone spot any other Croman flyers around?)

We're not sure who's responsible for the warning… there is the Croman Tenants' Alliance … as well as the Stop Croman Coalition Blog that serve as resources for Croman-related activities.

Previously on EV Grieve:
East Village represented on this list of the city's worst landlords

Reader report: Someone dumped motor oil in 2 Steve Croman-owned buildings
Posted by Grieve at 4:29 AM

There's nothing on the sign to say what the problem is. The disclaimer should be made smaller and moved down to that the message can be made clear.

A cronut is the cross breeding of a croissant and a donut, is a Croman half Cro-magnon and a man?

Half flakey, nutritionally-deficient passé symbol of the good life, half-man.

Hey EV Grieve, the two blogs you linked to haven't posted anything since last year, I wonder if they are still active. I emailed Croman Tenants' Alliance in February and did not receive a reply. Just wondering.
Thanks for all your good work!

I rented from 9300 for two years at 380 E 10th, and the worst part of the experience was dealing with my fellow tenants, specifically a floor full of wake-and-bakers on the 3rd and the 2am-screamer in 4B. The staff at 9300 were always responsive, they finished the reno on my unit on time *after* I signed my lease in 2013, and I even got my full security deposit back in a very reasonable amount of time. I was hesitant to rent from them after reading the Yelp reviews between the time I saw the unit and signed my lease—the reviews read like this flyer—but I didn't have a single problem with them.

That said, I was paying almost $2,900/mo for a "French door" 1BR; maybe the upset people are the ones who are still paying $400/mo or whatever and are getting the squeeze. If that's the case that sucks, but it's not necessarily representative of what anyone who is paying market rent is going to experience.

The Croman Tenants' Alliance had been maintained by a tenant who fairly recently accepted a buyout. Maybe part of his deal was to refrain from continuing the website. In any case, for whatever reason, he has stopped adding to the website and probably left it up for tenants to use the good information that has been posted on it, at least until his hosting contract runs out.
The Stop Croman Coalition Blog has not been added to because of present lack of articles to post and which have been posted on other venues. It is kept so that when the time is right current articles may be posted, and it is a contact point for tenants who need help.

Hey Edwin, how much is Croman paying you to write this?

info@stopcromancoalition.org if you need assistance.

They're not paying me anything; my final interaction with them was cashing my security deposit check. (I was frankly surprised to get it based on the comments of anonymous trolls like yourselves.) My personal experience was so out of whack with what people have said about them, and the people I've interacted with have seemed decent enough, that I wanted to stick up for them.

And I posted non-anonymously because, as you're demonstrating, talk is cheap unless you're willing to stand behind it. That you're accusing me of being a paid shill is ridiculous—a minute of Google-stalking me would convince pretty much anyone that I have better things to do than write paid apologia for slumlords.

Edwin, if you do not mind water cascading from light fixtures or your floors sagging several inches due to structural beams being removed when they were illegally renovating these pre-war buildings, so be it. I happen to care if my life is in danger due to water flowing through electrical fixtures or the possibility of the building I'm living in being structurally compromised due to inadequacy and the complete disregard for anyone other than himself. Unfortunately Edwin this goes way beyond finishing your (illegal) reno. on time or giving you your security back in a reasonable amount of time (which is the law anyway). It's about endangering and harassing others who've done nothing to deserve it. I'm glad you received your security back and I'm glad you didn't experience what the majority of us are experiencing but, if there's a COALITION that has formed with it's whole purpose being to warn people about you, you might just be a bad person. Steven Croman deserves the Coalition and any and everything the Attorney General can can throw at him,... In my opinion.

Those that respond anonymously are probably doing so due to past, current or future (because lord knows there will be future ones too) court cases that have been brought against them for no reason by Croman and they don't want any further directed harassment. He's evil, accept it.

To Edwin Watkeys - Since you are singing this slumlord's praises I question if you are aware of the fact that the New York State Attorney General is investigating the Cromans, and that last year the Elected Officials issued a signed public Statement applauding the Attorney General for going after the Cromans and their lawless lawyers and goons. In 2014 and in 1998 The Village Voice featured Croman as one of the 10 Worst Landlords in NYC. You have no idea of how many people's lives have been destroyed, their health ruined and emotionally drained and made financially bankrupt trying to save their home, in order for people like you to live in your nice renovated apartment. There are hundreds of negative articles on the Cromans, where have you been all this time Edwin? The Cromans have built their wealth with the blood of their tenants lives and miseries. The mere fact that you would toot your own horn and mention that people " Google Stalk " you shows what kind of ego maniac you are, and how you like to have your name public. Edwin, I promise you that someday when you finally learn how criminal, evil, cruel and destructive the Cromans, their lawyers and their agents are, you will be ashamed that you ever defended them...especially publically.

Edwin, Croman knew about the tenants who paid $400 before he bought their buildings- and fully understood they have rights to the same exact services and courtesies as tenants paying full market value. If he didn't like that then he had the right not to buy the buildings- but certainly not the right to try to squeeze them out. But his bad culture (we all know what that means) led him to imagine he could get away with thuggery. As for your own experience (likely as a paid shill) it was at best a single anecdote. Clearly there are problems by the thousands and in spite of the pressure he's experiencing now, hubris is leading him to continue his M.O. as if he's never done anything wrong. Looking forward to his plea bargain and settlement to be divided amongst his victims.

Anon: There's no need to elaborate on what the problems are. By now everyone in NY knows how horrible the Cromans and the various entities they hide behind - such as 9300 Realty are.

The market rate tenants who pay " Above Market Rate Rent " are being treated like garbage. They live in walk-ups, are without required essential services such as basic heat and hot water, they live with broken appliances, don't get repairs, insect and vermin infestations,
then they too get their apartments flooded with toxic renovation dust from the apartments that are being renovated, live with the constant construction noise from the renovations, no supers live on the premises, buildings are not maintained, etc., Once their lease is up - bye- bye because the Cromans will jack up your rent to whatever they want, and to top it off they don't return the market rate tenant's security deposits...making all sorts of excuses as to why they are keeping it, or that they will mail it to you and of course they never do. Read the plethora of reviews and horror stories out there.. Tenant's Beware - Avoid the Cromans & 9300Realty at all cost !

What planet do you live on - what were you smoking all the time you lived in a Croman building?

It is ironic that you didn't get along with any of the tenants in your building and just kiss-up to the landlord.

You are so paid off.

You know darn well what happened

The Cromans hired a a PR person and guess who she is ....no other than - Kelly McGee who used to work for Magaret Chin and then went on to work as spokesperson for the Department of Buildings.

Now Kelly McGee gets paid to defend and publically polish and whitewash slumlords Steve & Harriet Croman to the press and the entities they hide behind such as 9300 Realty. What a shame Kelly, it's so slimy & seedy - try to get a better job.

Wow dude writes his opinion and gets flamed! That seems so non-EV IMHO.

I heard that Harlem's full of those posters everywhere as well. It's about time. The Cromans visually pollute this entire city with their buildings plastered with their ugly " 9300 Realty - Apt. For Rent signsl Finally they are expose as the crooks they really are.

Edwin, you seem like a reasonable person. I'm not surprised your life was fine in your $2900 apartment the problem is some of us don't even make $2,900 in a month and probably never will. There are not many people left paying $400 and those that are are usually seniors so Croman gets a tax break via SCRIE, those of us who can afford to pay around $900-$1100 a month experience terrible harassment from a landlord like Croman because he would rather have a nice compliant person who can afford $2,900, and he is dirty enough to send a retired cop to people's homes to intimidate them and force them to leave. You can see the results of this on the now bland as velveeta east village.