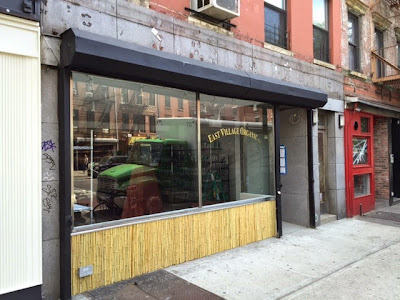 The folks at East Village Organic let us know that the store opened yesterday at 124 First Ave. between East Seventh Street and St. Mark's Place.

As we previously noted, the owner is Ali, who has run Golden Food Market on the northeast corner of First Avenue and Seventh Street the past 35 years

Among other items, we're told East Village Organic will feature:

The storefront was previously home to Kim's Video and Music until last Aug. 25.

A little more about East Village Organic, opening this spring on 1st Avenue
Posted by Grieve at 7:37 AM

Ali is a very nice guy. Best of luck to him in this new endeavor. I'll certainly buy all my 'organic' needs there. It's kind of funny, because there used to be a place serving similar fare directly across the street. It was called 'Prana'.

I just found out the hours:
Monday-Saturday 9am-10pm
Sunday 9am-8pm

Excellent addition to the neighborhood, and another place to go on the days the Greenmarket isn't open!

This is FANTASTIC news. I'm coming back to visit next week, and I need things I can't find where I live now.

Kim's knowledge kept me healthy and happy when Penny's was open.

See you guys next week!

Ali is great. He's a neighborhood guy. I will gladly shop there.