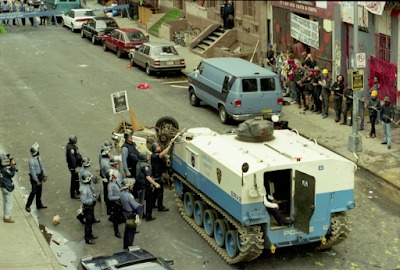 [Photo by John Penley via the Tamiment Library]

By Felton Davis of the Catholic Worker

All night long, we kept vigil, while the huge quasi-military force gathered to clear the squats on East 13th Street.

At about midnight on May 29th, people brought in an over-turned car and filled it with gasoline. One match, or even a careless person with a cigarette, could light this up and create a fire that could spread to the buildings, and trap those who were barricaded inside, burning them to death. How would that help the cause of squatting? How would that help communicate to the public the enormous work that was done to fix up these buildings? Or was it just a desperate gesture, to let the clearing turn into "another Waco," after the fatal confrontation in Texas two years earlier?

The debate will still going on the next morning, when the police brought in a re-furbished military tank, even after most of the gasoline was drained out of the car. The driver sitting on top of the tank motioned the riot officers to get out of the way, because he did not want to stop for those in front of it.

I'm alive today because the officers blocked the tank and dragged us out of the way. The debate over this extreme confrontation, and the extreme tactics brought to bear, continued in Central Booking that night, and it continued in the court where Stanley Cohen represented us, and it continued in the street, as people tried to re-take those buildings, and the Giuliani administration flexed its muscle, and more squatted buildings were seized or bull-dozed by the city.

Thanks for those who kept their sanity during this frightening time, and did not condemn us to death by fire and conflagration. Thanks for the memories.

• The Squatters of East 13th Street

The gasoline in the car is another glaring example of how anarchists shoot themselves in the foot.

I agree. The neighborhood was, well, more if a neighborhood even back then. We had art! Engagement! Social Consciousness! Revolution was in the air.

Now? Branded youth. To play off a recent anthropological study, we have "Primates of the Lower East Side."

why make this a contest/comparison of who is/was the worst?
why can't we have people with consideration and respect and engagement, and activism and experimentation and art and and and and...
without the pseudo anarchists, drugs, garbage, and so many frat boys, etc?

With all due respect to Fenton Davis, who I feel is an honorable guy, his recollection of the over-turned car is not exactly correct.

I and other SHADOW people covered the entire 13th Street Squat story, from the court fights through the afternoon and evening before the raids, through the raids themselves. NO ONE covered this story more fully and in more detail than US.

There WAS an over-turned car in the street, near where a street barricade was set up close to the corner of 13th + Ave B manned by squat defenders (building residents and members of the community), but it was NOT filled with gasoline with people inside (that's utterly absurd!), though gas had been spilled around the barricades to ward off the pigglies, who backed off when they smelled the fumes. Hence, no one was saved by "good cops" stopping "bad cops" in the tank from ramming the car until the "good cops" could get the squatters safely out of the way.

The NYPD tank was deployed for psychological purposes and was used ONLY to push the over-turned car out of the street. That was ALL.

I understand that memory can get fuzzy, but one must stick to the facts and not trash those who were committed to putting their bodies on the line to fight for what was right.

Trashing should be reserved for mayor Giuliani and his militarized police force that instead of fighting CRIME was used to STEAL housing created from nothing over the course of more than 10 years by squatters/homesteaders at NO cost to taxpayers in order to hand the buildings over to politically-connected real estate shill (and some time Giuliani paramour) Antonio Pagan to be run by his phoney "low-income" housing group [Lower East Side Coalition Housing Development] that used TAX PAYER dollars to create units for folks on years-long waiting lists to pay rent via public housing funds that Pagan and his gang would pocket.....

@anon 7:42: Felton never said there were people inside the car...

And the State gets payback to Stanley Cohen sits locked up in a jail on some bullshit trumped charges.

Happy to see my photo being used once again to remember the epic battle on 13th St. It seems that the curse put on cops by 13 St. squatter witches is stil in effect for 9th Pct. head at that time Michael Julian whose return to the NYPD has him being lambasted in the media for his approach to police training almost every week. If anyone wants to write to Stanley Cohen his address is Stanley Cohen 19846052 Federal Prison Camp Canaan PO Box 200 Waymart, Pa 18472 USA. Up the Rebels !!!!

I remember that day, I lived around the corner on 14th and B. My roommate had a huge weed business and one convinced the cops were coming too get him. (I should note he was wacked out of his mind that morning)

You folks might be interested in a movie called "Landlord Blues", shot in the Lower East Side in 1986, about the proprietor of a small bike shop and his friends and their battle with an evil landlord. As well as a thrilling story, it is a window to the way the neighborhood looked then in its full decrepit colorful lively glory. In particular, one sequence was shot inside and in front of 539 East 13th street (whose stoop is visible at the top of the photograph) as the homesteaders (the term they preferred to "squatters") were rehabilitating the building. It will screen at BAM on August 10

I lived on the block when this went down. I woke up to very low flying helicopters in the middle of the night (under cover of night they ambushed). I ran downstairs to find our block sealed off and police guarding(no one in or out allowed). I snuck down the street because I knew many of those in the squats. I remember clearly when they brought out the huge saw to break through the front door of the squat.