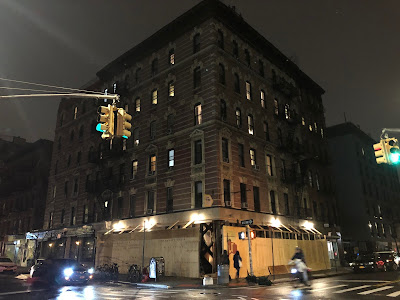 On Tuesday, workers erected plywood around the storefront on the northwest corner of Avenue B and Fourth Street, marking the beginning of the renovations here to make way for the Half Gallery.

In mid-December, ARTnews, who first reported that the gallery was relocating from the Upper East Side to 235 E. Fourth St., at the site of a former restaurant.

I mistakenly reported that they were taking the former Nobody Is Perfect space that was for rent at No. 235... 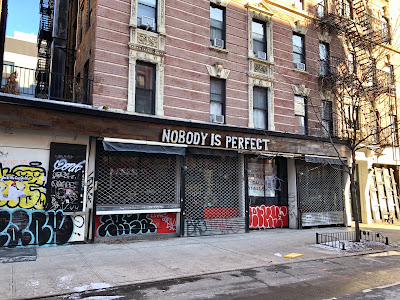 The gallery is going in next door where Tapanju Turntable (and Kate's Joint until 2012!) was at 58 Avenue B — aka 235 E. Fourth St. Right building, wrong former restaurant! My apologies for that mistake.

Anyway! To recap, the gallery, which has worked with Rene Ricard, Louise Bonnet and Nathaniel Mary Quinn, started on the Lower East Side in 2008 before heading north. Here's more via that ARTnews piece:

Bill Powers, who founded Half Gallery, said that many of the artists the gallery has worked with “have a real connection to [the East Village] and that art scene,” adding that the move is “a little bit of a homecoming.”

With the Swiss Institute, the Brant Foundation, and other art institutions opening in the East Village recently, the neighborhood remains a hotspot for art, Powers said, adding, “We used to get a bigger crowd for openings when we were downtown because I think the gravity of the art world, spiritually, is downtown or in the outer boroughs.”

The space is expected to open next featuring Tanya Merrill's first-ever solo exhibition.

Meanwhile, that other space remains for rent, waiting for what will be the sixth restaurant tenant in the past 11 years. Nobody Is Perfect closed here in the summer of 2018. B4 closed in June 2016 after nearly three years in business ... and previously Piccola Positano, Tonda and E.U. gave the address a go.
Posted by Grieve at 4:14 AM

Email ThisBlogThis!Share to TwitterShare to FacebookShare to Pinterest
Labels: Kate's Joint, the Half Gallery

Seems like a great addition. It will be nice to feel another vacant spot on lower Avenue B. It's also nice to have some variety. New Amsterdam School expanded and now a gallery. Any idea what the Revival place is on 4th and B?

The Kate's flag is still up on the building too

I hope this will be a great addition to lower Avenue B.

BTW, I talked to someone who lives in the building. Says that Revival is clothes, handbags and accessories.

I miss Kate’s Joint (the best vegetarian soups!) before the gentrification of Ave B and the hordes of bros and woohoo girls