Nobody Is Perfect has closed 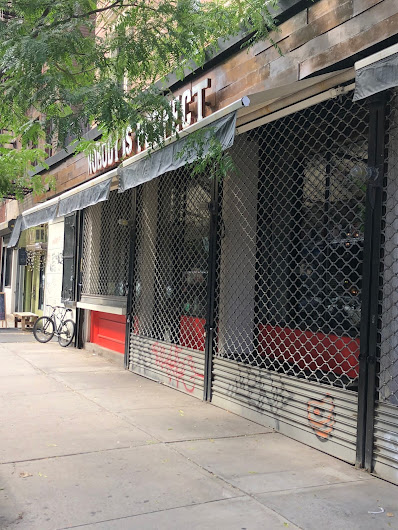 Nobody Is Perfect closed its doors for good in late July here on Fourth Street near Avenue B.

"The gas in the entire building, including the apartments and the restaurant next to us, has been shut down for six months," proprietor Mario Carta explained in an email. "We were unable to provide a decent menu to our customers during that period of time and that affected our business knowing that we were open for less than a year trying to build a clientele in the neighborhood."

Carta, who also runs Pardon My French at 103 Avenue B and Chouchou at 215 E. Fourth St., opened the Italian restaurant in the spring of 2017.

He also noted that the Community Board 3 denied their sidewalk cafe application that "could have helped us stay open."

In issuing the denial in May for the 16-table sidewalk cafe, CB3 officials said that the restaurant received 45 311 calls since it opened, 18 of which required a visit from the NYPD, according to the official minutes of the meeting. (PDF here.) Five residents (as well as a rep from the East 4th Street/Lower Avenue B Block Association) also spoke at the CB3 meeting, stating that Nobody is Perfect "plays excessively loud music and allows cheering and chanting associated with its weekend boozy brunches," which was in violation of its license. (There were other complaints too, such as leaving the restaurant's front windows open past 10 p.m.)

Nobody Is Perfect was the fifth restaurant to try this address in the past 10 years. B4 closed in June 2016 after nearly three years in business ... and previously Piccola Positano, Tonda and E.U. gave the space a go.

Previously on EV Grieve:
Team behind Avenue B's Pardon My French eyeing 2 spaces on 4th Street
Posted by Grieve at 4:09 AM

Email ThisBlogThis!Share to TwitterShare to FacebookShare to Pinterest
Labels: closings 2018, Nobody is Perfect, restaurant closings

You are never going to find a restaurant that racks up 40+ 311 calls WHILE NOT HAVING GAS SERVICE.

E.U. got put through a nasty wringer when they were here. I remember it took them forever to get the liquor licenses that they wanted? The neighbors were intolerant of it altogether.

(Meanwhile the infernal Le Souk lasted around the corner much much longer than any of these restaurants AND it was a terrible neighbor. Why? Maybe because it was on the avenue and not the side street.)

Meanwhile I've been past Pardon My French a bunch of times, it's not a disruptive place. (ALso on an avenue!)

Bad landlord + the neighbors don't want anything here. Forget the general location, just avoid it if you're starting a restaurant. Side streets in residential neighborhoods are always dicey anyway.

Loud music, cheering and chanting at a restaurant brunch sounds like the stuff of literal bad dreams.