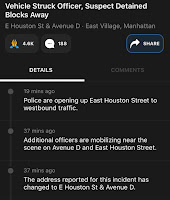 In case you're wondering about the helicopters and large NYPD presence this evening around 8.

According to media accounts, plainclothes officers had conducted a traffic stop on Houston and Avenue D/Pitt Street. ABC 7 reported that the suspect reversed his vehicle, pinning one of the officers against the police car.

The officer, from Police Service Area 4 on Avenue C and Eighth Street, reportedly suffered a leg injury and was taken up First Avenue to Bellevue.

The suspect drove off was arrested a short distance away, per the Citizen app. Charges are pending.

CBS 2 has a different (and correct) version of what happened. According to the station, "an out-of-control van hit the officer's parked unmarked car from the back." The Post's account corraberates this version of the incident.

Police caught the driver of the mini-van nearby on Delancey and Columbia streets, per these two reports.

The Daily News reports that the driver of the mini-van was allegedly drunk:

Franklin Liz, 45, is now facing drunk driving, vehicular assault and reckless endangerment charges for starting a chain reaction on Tuesday evening that left a 39-year-old police officer in the hospital with a compound fracture to his right leg, cops said.

Helicopters are the new black.

Speedy recovery to the officer

Police helicopters should be banned. They are a noise polluter and
wa$te taxpayer$' money. Not once have they ever been useful in solving or preventing a crime.

Any facts to support the "not once" statement Bill?

I witnessed the response to this up front. Honest to god, people thought it was the response to a terrorist attack. There were dozens of cop cars screeching around at full speed, multiple ambulances, a large incident response truck, and loads of cops running around like headless chickens, screaming and yelling at everyone, diverting traffic etc. They had roadblocks all the way up Houston, and all the way down 1st Avenue up to about 10th street. Closed every cross street. People were walking around saying "wtf is going on, is there a terrorist incident?" Later, we found that no, there wasn't a terrorist incident, it was the simple matter of a non-fatal hit and run collision, and that the huge overblown (and I'm sure, very expensive) response was purely because a COP was the victim. Non-fatal hit and runs happen every day in this city, but of course the NYPD doesn't give a damn when the victim is a civilian, and even when that victim dies, their response is decidedly relaxed. They even formulate preemptive defenses for the driver: "it's possible he didn't know he'd hit anyone" etc. Break a cop's leg, however, and it's like terrorists attacked the city. Every day, the NYPD cannot help but betray the fact that it values officers lives over everyone else in New York. I'm not surprised they get no respect.