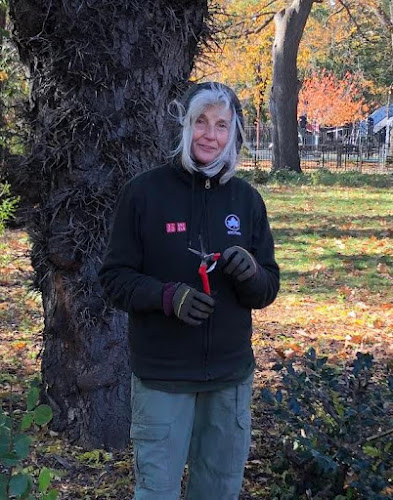 Deborah Hulse, better known as Debi the Gardener to regulars of Tompkins Square Park, retired yesterday after nearly 15 years with the New York City Department of Parks and Recreation.

Born and raised in Greenwich Village, Hulse was a musician before entering the world of gardening. She received a Certificate of Horticulture from the Brooklyn Botanical Gardens while working at Union Square Park. Hulse started at Tompkins Square Park in March 2009.

In 2012, the East Village Community Coalition recognized her tireless dedication to beautifying the grounds at Tompkins Square Park with its Outstanding Pigeon Award.

EVG correspondent Steven spoke with her yesterday. Hulse said she will miss the flowers and plants that she tended to through the years. "They are my children."

She also discussed the many residents that she has become friends with at the Park. Hulse won't be a stranger though: She has plans to stop by from time to time. Other retirement endeavors include revisiting her music career. 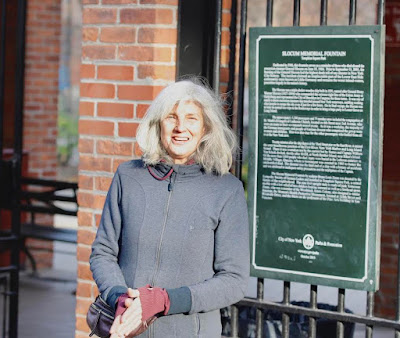 The Parks Department has not made plans to replace Hulse just yet.
Posted by Grieve at 4:45 AM

Debi is a treasure and the Parks Department will never find an equal! I've known her for several years now and always looked forward to seeing her and chatting for a few minutes. She kept on working as we chatted. She was very serious about the park and her work, and I am very concerned that without her we will soon see the difference.
Good luck Debi !!

No replacement yet? Sounds like no replacement, period. We should stay on this. Contact 311 and our (hmmph)"local Council member."

Here's someone who, looking back on life, can say: "Yes, I've made the world a better place."

Thanks to Debi, we have enjoyed a beautiful park for the last several years. I credit her with making the park look so lush and colorful. She worked tirelessly to maintain Tompkins and it showed. I wish her well in retirement and taking a new path in music. You will be missed, Debi!

Debi, your hard work and love have made the park a destination for the past few years. We will miss you!

Going to Miss Her !
Happy Retirement !

Literally the hardest working person I’ve ever seen in my increasingly long life. She never seemed to stop moving or not have a project. She really is irreplaceable. Thanks for all the hard work and caring.

i DISTURBINGLY appreciate stuff more after i see it with a historical prism---let me try to begin to adjust this---the person in charge of the grounds at the JOHN LINDSAY EAST RIVER may be the equal to Deborah Hulse---having said that---BOTH :)

afbp--absolutely! I was just in East River Park admiring how Melinda (I think that is her name) from the Lower East Side Ecology Center has made the park a wonder of native, resilient plants (with a few salt-resistant donated non-natives mixed in). And yes, Deborah Hulse made Tompkins a beautiful place--the Parks Department better get on her replacement and quick, because it's not going to be easy! (I hope they recognize her contributions!!)

So much respect for the workers in parks and public places in New York. So much to always clean up. Thank you, Debi, and those like you. It makes my day just walking by greenery on my way to work or an errand.

She was one in a million for sure clearly loved what she was doing it made a big difference in the appearance of the park. Guess now we must rely on the spring Corporate Volunteers of JP Morgan, Price Water house, KPMG and others for the one weekend gift of painting benches,raking up winter's debris.

Thank you Debi! Job well done and much appreciated throughout the year. Happy retirement.

I quite like the mass planting of oversized hostas in TSP. Very eye catching. Cheers, Deb !

Thank you, Deborah, for all the devotion and care you've given to our neighborhood park. You will be missed. Best wishes for your next phase!

Does anybody even really work at that park other than her?
Like Dave on 7th said, she is constantly working away at the landscape. She is one in a million.
Best wishes to her.